In some ways this was just as hard as I thought it would be – it’s like kicking my babies out of the house when I know they can’t fend for themselves, but in some ways it was easier than I thought. Some of the comics that I have complete runs of… I don’t even remember. American Flagg? Cheval Noir? Oh My Goddess? But others… I’m so sorry. Akira, Animal Man, Green Arrow, Evangeline… It breaks my heart to let you go, but I never go to you to reread, and maybe some of you I can get as Graphic Novels, which take up less space. 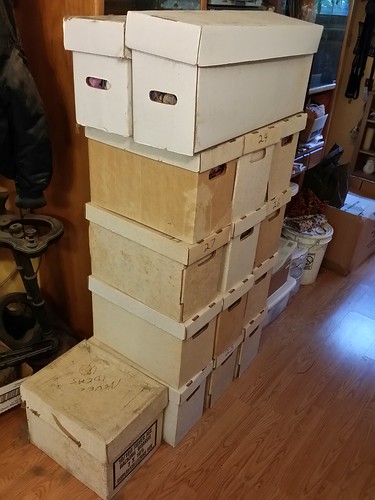 I got all this, plus another 200 or so that I’d never even put into boxes, down to six boxes of what I want to keep. Sandman, Hellblazer, Books of Magic, Black Orchid, Elfquest, Concrete, and a couple others.

I would say this took me about three days, although one full day was just thinking about it (I am not sure, 100%, why I was reluctant to start, but it was probably some combination of worrying they’d be in bad shape, worrying I’d cave and not want to get rid of any, worrying that I’d start reading and lose a week), one day was mostly thinking about it and finally moving the boxes into the living room where I was going to sort, and one day was actually sorting.

But now I have to say it took five days, hahahahah. One extra day because I accidentally unplugged my computer while I was typing this and then went on to do other things and never got back to it, and one day to pull some comics for a couple of friends, which means that I’ve whittled the boxes down even more. I’m glad that some of these comics are going to other collectors who will appreciate them — it doesn’t look like I’ll be able to get rid of all the ones I was thinking I’d get rid of, though, and now I’m at a standstill. Tim asked why I didn’t just take them to GoodWill, and I almost fainted. Have sets broken apart? Comics tossed willy-nilly in with other things, spines bent, bags and backs thrown away? BLASPHEMY.

Maybe the lesson for me here wasn’t that I’m supposed to get rid of all of them, but just that I’m supposed to be willing to get rid of them. Akira is now spoken for, which makes me happy; I’m sending that friend Appleseed as well, because if they like the one they’ll probably like the other. What of the others, though? I thought about posting pictures on Facebook of the titles I’m willing to part with, but I really don’t want it to devolve into an episode of “oh, do you have ____ issue # ___?”. I really want it to be more like, hey, if you want 225 issues of Green Arrow, here they are. I want them to go to a collector, or at least someone who will appreciate them – with gentle hands – but I also know that if I give them up, I have to give up caring what happens to them. It’s not like I’m adopting out a pet, and want to make sure they haven’t had ten dogs who have all gotten hit by cars. “Do you drop your comics in the mud? THEN YOU CAN’T TAKE MINE.” Ugh. The perils of being a Collector. It’s hard to let go.