In case you haven’t picked up on this, Tim and I have been talking about moving the HaldeCon Household. We started earlier this year with an unexpected turn; we decided to start verbalizing what we wanted, and within a month or two of that, some friends whom we love dearly got a new job out-of-state and decided to sell their property, which is perfect for us. Like hawks, we’ve been circling around while they got renovations done on their new house… and those renovations are almost complete. After months of worrying about what the price might be, on this perfect-for-us piece of land that comes with the love our friends put into it and memories of good times spent with them in their beautiful house… we have a price and we are going to start preening our peacock feathers in front of banks, hoping they will throw bags of money at us (OK; so we’ve also spent the last five months paying things off and making ourselves look good, financially, so we are pretty positive that it’s just going to be a waiting game/approval process).

What do we want in a piece of land? Well… first, let me tell you want we DON’T want. Because in the last five months of waiting, we’ve also looked online at a lot of other, similar properties that frankly just don’t look as good. This is going to sound like That Poor Man is just along for the ride, but having lived out in the boondocks before, I have a list of things I *don’t* want. In fact, what we’re looking for in a place could more be defined by what we’re NOT looking for rather than what we ARE. I have a long list of “never agains” thanks to living on 40 acres in the middle of nowhere for a number of years. Oddly, the same living situation has given me a small list of “must haves”. But the “must not haves” are longer. 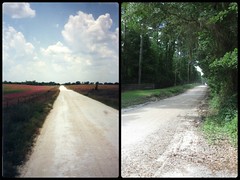 The place we get must not have a neighbors-are-responsible-for road. Dirt/limerock is fine, it doesn’t need to be paved. But I don’t care to spend a year collecting money from neighbors to grade the road, with petty arguments of people who live closer to the entrance wanting to pay less, or people who drive slower wanting to pay less than people who drive fast, yadda, yadda, yadda. Our friend’s house is on a limerock road, but it’s county-owned and county-graded, on a regular basis. In this photo, the road on the left is when you would first turn onto the 5 miles of limerock road you’d have to drive upon to get to our farm. The road on the right is turning out of our friend’s driveway. The quality of the roads are very similar, but our section isn’t five miles long, and we don’t have to be responsible for taking care of it.

The place we get must not be so far out in the boondocks that we can’t get the Internet. Amy and Isaac can understand that first-hand right now, unfortunately (I hope that gets resolved soon, sweeties!). For us, I don’t just mean “oooo, I don’t want to be without the Facebooks!”… I mean that 95% of my sales come from my online shop, and without internet access I would have to completely rebuild how I market HaldeCraft, taking myself offline and turning into wholesale only — and that is so not how I want to run my business. Tim also needs to be able to log onto work computers periodically and run updates and/or install new things and/or fix things for other people at night and on the weekends. No Internet is a dealbreaker. And while how we get Internet (and cable) now – Cox Cable – doesn’t go out that far, there are a couple of companies that run DSL out that way. We’re still not sure what we’ll do about cable TV, but I bought a Roku a few months ago to try to get us weaned off cable, and between the trifecta of Hulu Plus/Netflix/Amazon Prime (and anything network that they show later online), I don’t think we’ll really miss anything other than Game of Thrones on HBO (and that, we can watch at Aunt Gay and Uncle Joe’s house). A satellite dish is also an option for TV – that’s what we had out at The Farm, back in the day.

The place we get must also not be so far out in the boonies that there is no mail/UPS/FedEx delivery/pickup, and not so far out that we have to truck all our trash to a county dump. Both are things I’ve lived with before, and both are awkward for how we live our lives. I won’t be getting into town every day, which means that if there isn’t house mail delivery, either Tim has to remember to go to the PO every day, or I have to make a special trip to town… which I would have to do, for mailing out packages. Plus, a few of the supply places I use do not ship to PO boxes, which would mean I’d have to find alternate supply places from which to order. As far as trash goes – and maybe my perception is colored by living with forgetful alcoholics who would leave the trash sitting around the porch in bags for months at a time, but I want that shit taken out weekly. The place we’re looking at has house USPS/UPS/FedEx delivery/pickup, and weekly trash pickup. Perfect.

The place we get must not be a mobile home. I don’t care about recent improvements in mobile home technology or care about how big it is. We’ve seen some properties that have triple-wides! And I don’t meant that as in backing a single-wide up close to a double-wide and cutting a doorway between them, I mean an actual triple-wide mobile home. That shit is still a mobile home, with plastic sinks and the ability to burn down in three seconds. I would take the crappiest, smallest block house over a mobile home. I have lived in mobile homes and I am done with that. Mobile home is a deal-breaker.

The place we get can be set up for livestock, but we don’t want any. Between us, we’ve already had cows, chickens, ducks, sheep, rabbits, and horses. Having all of those things has cured us of wanting them or anything similar. We will stick to dogs and cats, and the occasional passing-through wild rabbit or deer or turtle. Birds and owls are a given. We might do bees, for cross-pollination and honey. I don’t want to talk about the spiders.

The place we get must have a porch. Case in point: the porch I judge all porches by (top photo) and the porch of the house we want to buy (bottom photo). Check! Dream if you will, a picture, of you and I having evening beverages as we sit on the front porch and watch the sunset. 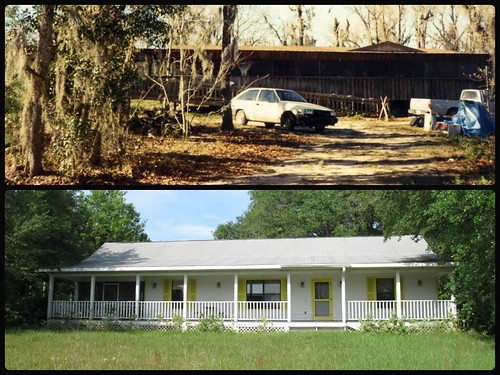 Speaking of watching the sunset, the place we get must be scenic. Now, nature pretty much does a good job wherever she is, but here are a couple of photos of the place I used to live (left two photos) vs. the place we want to buy (right two photos). Check, and mate! 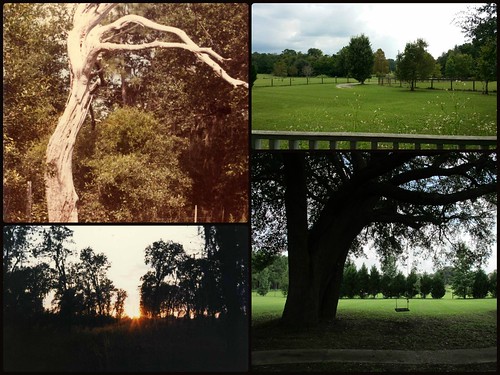 There are two things on my small “want” list that this property doesn’t come with; a fireplace, and open water. Those are not dealbreakers to me – Tim and I already know where we want to put in a fire pit, and we’re planning a water feature/small pond that will incorporate filters to clean runoff water from when I dye yarn. All in all, nothing else we’ve casually looked at compares to this.

What else can I tell you….? It’s five acres, about 4.5 of which is clear-cut. There’s an acre fenced off for a horse paddock, which Tim is going to slowly turn into the world’s most awesome garden. We’ll probably fence out about another acre for a dog run; how much fencing is still under discussion. I think I want more fencing done than Tim does, but I’m paranoid about the dogs jumping the low fence that’s already there and either getting into a neighbor’s property or – worse – running out onto the Interstate, which does bump up against the property. Speaking of which, the sound of cars on the I-75 doesn’t bother either Tim or I. The constant whoosh of cars is, to me, like living next to the constant sound of the ocean. It’s just white noise because it’s always there. Cars driving down our current road, with loud bass music or no mufflers, is more jarring.

The house itself is 1200 square feet, with another 300 sq ft. of porch space. The house we have now is 1550 sq feet (not counting a teensy back porch) and so while it seems like we might be losing square footage, keep in mind that about 650 sq ft of our house is being used right now for HaldeCraft…. which brings me to this…. 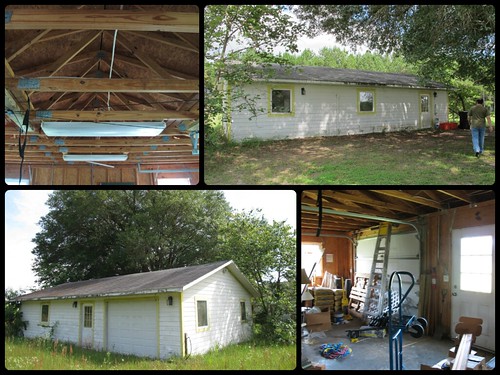 … the 950 sq ft unfinished workshop/garage that is about 50 feet out the back door of the house. A workshop that Tim agrees can be just for HaldeCraft.

Imagine — HaldeCraft, contained, in one spot! No more precariously carrying greenware through three sets of doors, tripping over cats the whole way. Enough room so that I can have a dye bar, and a separate soap bar, and a dedicated slab-roll table… instead of all three of those things being in the same place, and having to move them all around if I am using one but need to use another. Being able to shut the door on work and not have bits of it scattered throughout the living room, mocking me and making me feel guilty after dinner, for not working on it. Room enough to get a wheel – two wheels, if Tim’s Aunt Cetty and Uncle Joe winter over with us in their RV, because the clay knowledge that Cetty has is immeasurable and I can learn so much from her if she’s around us (not to mention that Joe just so happens to be an electrician, and can help us rewire the workshop for the kiln)… or two kilns, because, room enough for a second kiln! Room enough for storage of more finished ceramics, meaning backstock and/or a quicker turnaround time on sold-out objects. Room enough to dry yarn without having to hang it on the back porch. Room enough so that I won’t knock over a box of delicate ceramics just by turning around on a ladder.

They say if it seems too good to be true, it probably is. This place is perfect/not-perfect… there’s a lot we’re going to have to do; moving some electricity around in the workshop, adding sinks to it, insulation and drywall, fence building and repair, yadda yadda. So I don’t feel completely starry-eyed and dreamy. But it’s perfect for us, for our needs. There’s nothing that sets off my klaxon horn of DO NOT WANT, and everything else is right up our alley or workable (for instance, Tim now living 30 minutes or more away from work). 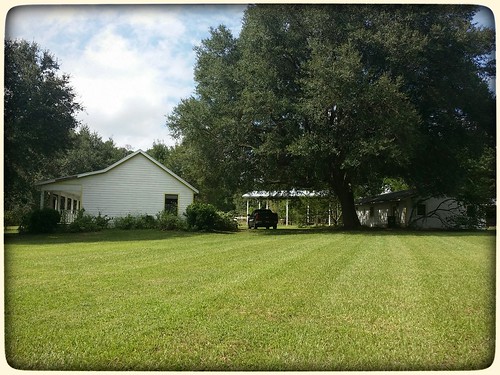 Think happy thoughts that the bank comes through for us. I’ll keep you posted.