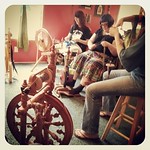 I did a lot of this in January. It was relaxing, and fun, and made me feel like I was getting something done even when I was sick.

And I continued to think about MRI vs Biopsy. At this point the MRI place had called me and set up my MRI appointment for January 31st. I think they called me by about the 10th. At first I was firmly in the MRI camp, despite my claustrophobia, because I thought the biopsy would put me out of work for too long. But the more I thought about it (and the more my brain worked overtime) I started wondering, really, would a few enforced days off work be the worst thing that could happen to me? And I started to worry about the MRI. Worry about being in the 3% of people they wouldn’t be able to tell what it was, so that I’d need a biopsy anyway. Worry about the claustrophobia. Worry about the cost. Worry that there’d be some weird shit that would happen involving latent metals in the ink of my tattoos. 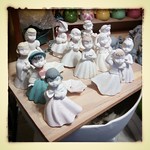 I also pulled out a few unfinished things, because for some reason contemplating the forward in my life also makes me look backwards. Plus I was cleaning up my studio. So I pulled out a few things that had been sitting, and worked on those.

The cost of the MRI is ultimately what swayed me towards the biopsy, in a roundabout way. They had told me at the clinic when I’d gone for the ultrasound that an MRI can be pretty expensive; that insurance would cover all but the deductible on the biopsy but that MRIs were considered “extras” and even though my doctor was recommending it, the cost may be prohibitive. What’s the cost? They didn’t know. I would have to talk to the MRI place. Which I did, when they called. The woman who set up my appointment transferred me to someone who’s department I did not catch, and then the connection was wretched and she wound up hanging up on me. Calling back a few days later got me someone who suggested that I call my insurance. I stressed that I had been transferred to someone previously so could she just do that? She promptly transferred me to someone who was away, in training (for customer service, no less! HAHAHAHA!). Another couple of runaround calls and rude people, and not being able to find out if my insurance was going to cover it, and I was just fucking done.

So I called the mammo/biopsy place, and said I’d like to cancel the MRI, and get the biopsy, and… the woman in charge of that had already left for the day (this was a Friday, I think the 14th) but a message would be left and I would get a phone call. They would cancel my MRI for me when they called me back to arrange a biopsy date. 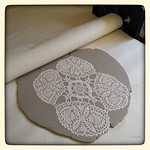 Meanwhile, I was moving leaps and bounds forward with my handbuilding, in part because of this awesome present that the HaldeClan pitched in for me, for Christmas. I love, love, love, love, love this slabroller. Holy crap, how did I live without this?!

On Wednesday the 29th, two days before the MRI, I got a letter from the MRI place telling me what to wear/bring/do, etc., and one of those things was bring copies of my mammogram. ER? They couldn’t have told me this more than 48 hours before? So I called the mammo place, the woman who could burn that to a CD for me was going to be there for two more hours, so I dropped work and ran over there. Well; drove. Went there, signed in, casually mentioned how I wouldn’t even need to be going through all this if they had called me back to schedule a biopsy, signed paperwork stating that I’m giving them permission to give me my records, and they burned my mammo pictures to a CD for me, and sent me on my way.

I’m not even lying when I say that about an hour after I got home, someone called me to say she’d gotten a message that I wanted to cancel my MRI and get a biopsy, and she’d be happy to schedule that. ARE YOU SHITTING ME? I WAS JUST IN YOUR OFFICE. GETTING THINGS FOR MY MRI. Sigh.

She was very apologetic, said that she would call to cancel the MRI, and arranged for me to have a biopsy on February 11th. I was alternately relieved that I wasn’t going to have the MRI, and put out because I really wanted to started blogging about all of this but didn’t want to until I had a definitive answer. So then. 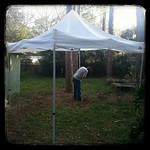 The Friday I was supposed to have the MRI, when the mail came at about 4 PM (the MRI was supposed to be in the early afternoon, around 1), I got a letter in the mail from my insurance company…. I’d been pre-approved for the MRI and would only have to pay the deductible/co-pay. GOOD TIMING, YO.

That Saturday we went to the Medieval Faire, and had a great time running into friends.

That Sunday we drove to the St. Pete area and picked up a craft show tent (and shelving unit) I’d found for sale.

Then I had about a week to wait until the biopsy.

Previous post So, tell me about the yarn club you just finished!