So on Tuesday, February 11th, I got my ass up at the crack o’ dawn to shower and get ready to go have sharp things stuck in my boob. FUN TIMES, YO! I was fueled and ready for action because two customers had emailed me that morning with “I know you said you’re taking the day off, but, [ insert question about custom order here ]”. WHO NEEDS COFFEE WHEN YOU CAN START YOUR DAY WITH STRESS?! You see, I had started to taper off the caffeine. In reading about cysts, I was finding a lot of information that distilled easily down into “lots of women get them and, like headaches, the reasons can be different for different women.” Sometimes it has to do with hormone changes, sometimes with diet, sometimes with caffeine, sometimes with the type of bra one wears, sometimes it’s hereditary. Or it can be some of those, or all of them! Or some at different times in your life! AWESOME.

After the ultrasound, I decided I would start with three things — cutting down on caffeine, cutting down on stress, and not wearing a bra as often. Caffeine was a likely culprit, as I drink two or three cups of coffee a day. It was also something that was easy to change… somewhat. I do like the ritual of a cuppa in the morning. I started buying both caff and decaf coffee, and mixing them (rather than quit cold turkey). The only way I could really cut down on stress was to start saying “no” and meaning it, so I did that. I’ve turned down a handful of things that might have been big (for HaldeCraft) but that would have caused me no end of stress (quantities, time limits, weird “I’ve got a bad feeling about this” vibes when talking to people about what they wanted). Some people came back with an “are you sure?” and the second “thanks for thinking of me, but no” was a little harder than the first but I stuck to my guns, and ultimately the stress of sticking to “no” wasn’t nearly as hard as taking on a few things I knew I didn’t want to do would have been. And it was confirmed for me in the ulstrasound (when they were going over where my cysts are) and also by a few days experimentation that wearing a bra that keeps the girls contained and immobile, hurts. Underwire bras, no wire bras, sports bras… they all hurt because the denseness of my breasts pushes the mustard-seed sized cysts in against my ribs. It’s like the GD princess and the pea all up in there. So, most days, no bra, unless I’m going out and about and seeing people. People I really, really like.

But I did have to wear a bra the day of the biopsy, because they were going to send me home with an ice pack. 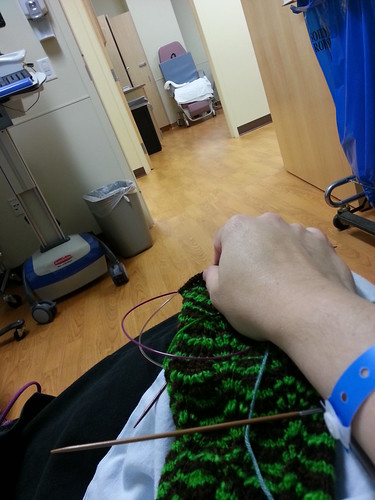 This is me, sneaking a picture from across the hall from the room I was waiting in to the room I was going to be in for the biopsy. Why? Because you can see THE CHAIR. I don’t know what I was envisioning in my mind, really, as far as “how this biopsy actually happens”… They said when I got the ultrasound that in doing the biopsy they’d put me back in the mammo machine, see where everything was, and then use that to place the needle with a machine. Somehow I thought that meant I’d be standing up – glad I wasn’t, it took over an hour – but I also kind of thought they’d go in… head on? Like, shortest distance?

Nope. They go in from the top. I had to sit in THE CHAIR, it’s sort of like a cross between a lumbar support lounger and a wheelchair, and they wheel you up to another mammogram machine that’s short, and stick you in it. But. BUT. Where they were going in my breast was pretty far back, close to the ribs, and because they’re going in from the top, I had to really, really lean in. But the attachment to the mammo machine that guides in the needle for the biopsy (and microchips you – more on that later) is then RIGHT THERE IN YOUR FACE. So I was leaning in to the front and left as much as I could, but at the same time sticking my neck and head as far to the right as I could. Yeah, my chiropractor had his work cut out for him next time I went in.

So after they got me situated in such a way that they could reach Lenny (and this took about half an hour just by itself), they numbed me up. The top part of the boob-crusher, instead of being solid plastic like the other one I’d been in, had a small square cut out of the top. Maybe about a 2-inch by 2-inch square. They injected lydacaine (I might be spelling that wrong — my SpellCheck wants to change it to “cocaine” and I’m pretty sure THAT’S not right) and in just a bit I was numb. Then the tube came down just to skin level, the needle came out of the tube, and there were all sorts of horror-movie gut-sucking noises. OK, not too many, but there were sounds… and since I couldn’t FEEL anything, that’s what I focused on. It didn’t take long to get a sample, and then the needle retracts but the tube stays there, and they pneumatically inject a clip into you. You are not alone if you just started thinking of Microsoft’s Clippy. Yes, now Lenny has a friend, Clippy, who marks the spot of the biopsy so that any future doctors will see that indeed, they are not going where no man has gone before. 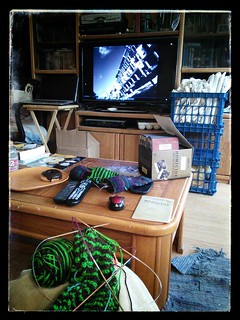 Then they sent me home with the worlds thinnest ice pack (seriously, it was about the size and thickness of a paper coaster you get at cheap bars) and the instructions to take Tylenol now, before I even left, do 20 minutes with the ice pack and 30 minutes off for four hours, and they’d call me in a few days with the results. Allllllllllllrighteeeey, then.

So I went home to my knitting and my ice pack and my ignoring customer emails and my Homicide: Life on the Street and my trying not to think about how I’d like to be painting ceramics and my donuts and generally not feeling too bad until OH MY GOD THE TYLENOL WORE OFF. Then I felt like I’d lifted a car off a baby. They told me not to lift my arms over my head (oh, so I’d had to wear a button-down shirt to this, that I also had to sleep in, because no arm lifting for 24 hours), no pulling on heavy things, no pushing heavy things, no lifting laundry baskets or vacuuming (HAH! Have they MET me?) or walking the dogs for 24-48 hours. I tell you the truth, my arms did not even WANT to lift. Not one iota. I took two days off, and then most of a third, and on Friday of that week they called me back and told me that I was totally fine, the tissue was benign, see you for another mammogram in six months.

And finally I could breathe. And move on with other things. And blog about all this.

And that’s it. That’s the story. I’m sure I forgot a few things here and there, small details. Feel free to ask if you have questions. Even if you don’t know me and you’ve found this blog post a year from now, searching for stories to allay your own fears.

Do you know what really surprised me during all of this? That when I did reach out to a few of my friends, the predominant response was “Oh, yeah, that happened to me.” I’ve had SO MANY of my girlfriends say that they have had similar experiences, and I had absolutely no idea. Why isn’t this talked about more? I think I would have been a lot less worried if I’d had my friend’s stories at the beginning. If I’d known what they’d gone through before I went through it. So why don’t we talk about this more? The numbers that media throws at us are numbers of death — but there’s a surprising amount of “not much happens, really” numbers. Why aren’t THOSE the numbers we know more about? Or… do I just have less of a sense of privacy than my friends? Maybe this really is something that should be hush-hush, and nobody should bring it up in polite conversation… but I was just raised in the wild by wolves so I don’t know any better, and bring it up?