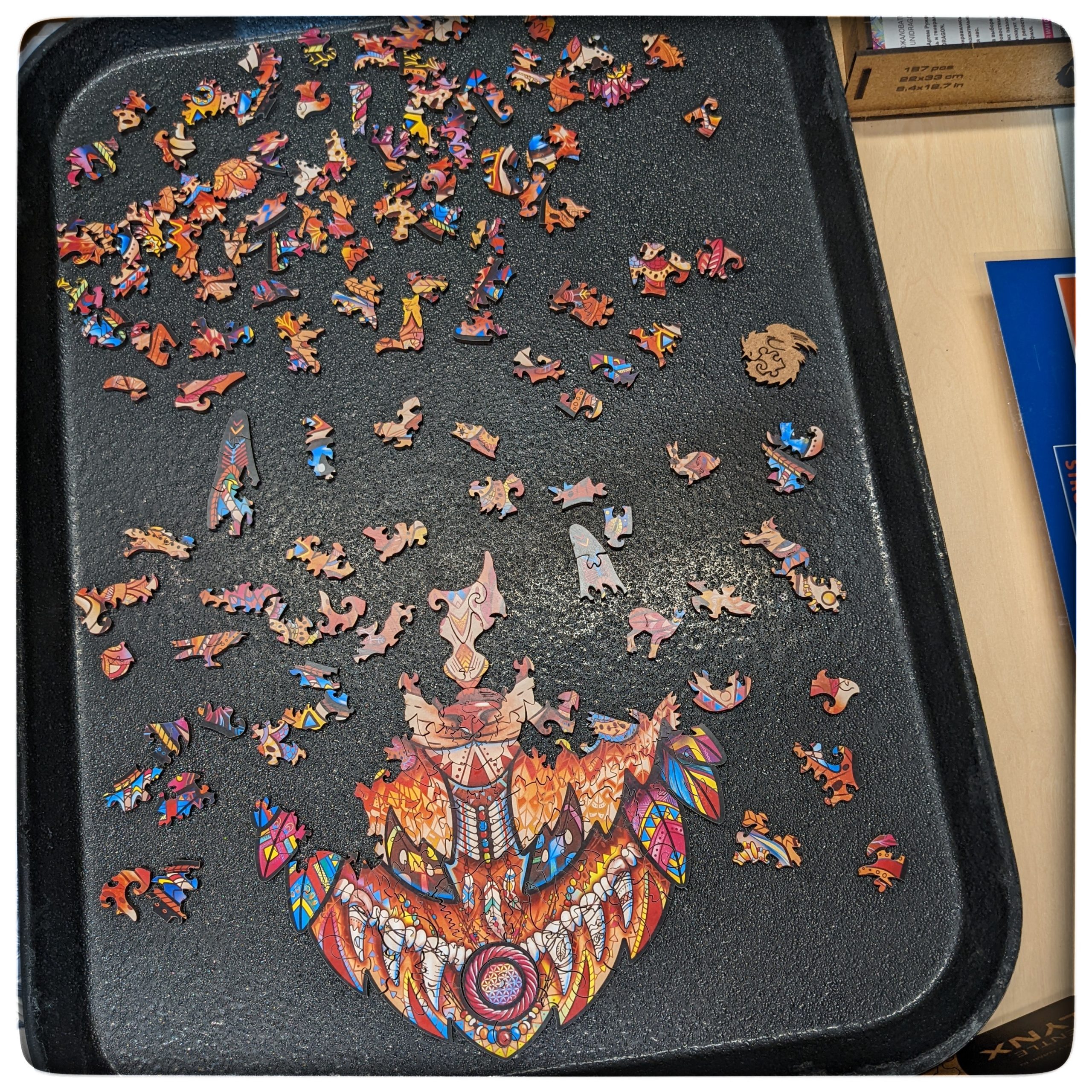 Tim Interrupted
Posted By Lorena
I’m not sure I like the look of this new template I’m trying out, y’all; I mean, I like how the front page looks but in my posts, it’s stripping out all the italics and that’s how I’ve been differentiating between stuff I wrote on the day and stuff I’m writing about the day, now, months later. Grr. I might have to get in there and monkey with the CSS. Just what I have time for! Yay!

It looks like the only thing I wrote on Facebook on the 26th was at the end of the day, about the fudge Santa left me when they came in to clean my house during the day while I was at the hospital. I don’t even have any notes from that day. I do have texts, tho; that was the day that Jenny texted me to tell me she was coming down with two passengers and would be there on the 29th. I can’t believe that I actually said to her, “he should be home by then, so if you all want to stay with us blah blah blah”… HAHAHAHAHAHA what a sweet summer child. 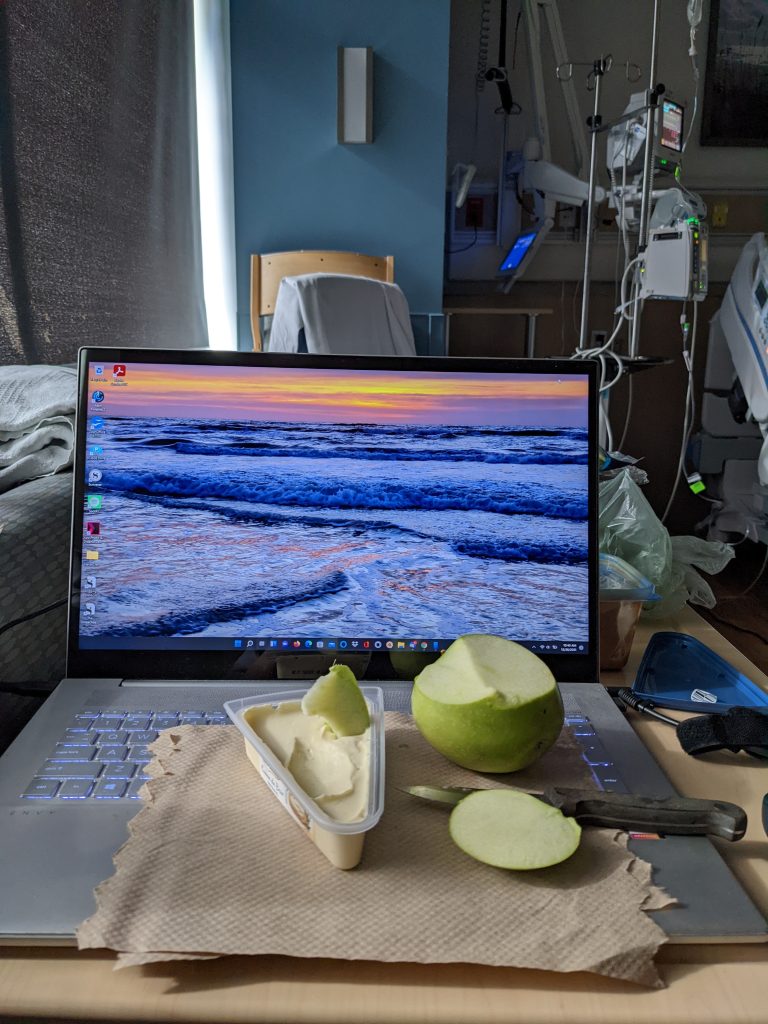 CT scans are back, and nothing — a small spot on his liver that they’ll do another MRI on, as outpatient. They still need to do another ultrasound of the heart and brain, but it sounds like they have absolutley no idea where the clots are coming from. Which fills me with confidence (NOT) and thrills me (NOT) that he’s practically cleared to go home – just as soon as they get those other two tests.

And I don’t like how sleepy he is. I don’t like how much of a headache he has. I don’t like how slow he is to answer questions right now, even simple questions like “are you cold” or “does your head hurt” — he’s overall, much slower even than he was 24 hours ago, closer to the fucking brain surgery. I took the doctor aside when they were just in here and was like, listen, I understand x and y and z but I DO NOT LIKE THIS, and THIS IS SOMETHING I HAVE HISTORY WITH. Sigh. We’ll see if they think I’m just the emotional wife, or if they listen to me.

Here’s what we didn’t know then, and didn’t know for a few more days… he was still having strokes. Most of them were tiny; but he had at least, I think, nine big ones between the 18th and his open heart surgery on January… uh… January 10th. But he had many, many, many micro-strokes. Some were bleeds rather than clots – I’ll get into that more when I talk about something that happened around the 5th or so. Anyway. My previous experience with strokes, in my friends and family, were of full-side paralysis. Most of the micro ones he was having were in the area of the brain that regulate body temperature — remember how, on the three days he was home, he was complaining he was hot all the time? And I had to crank the AC down and put a box fan on him? And in my notes about this day, he was complaining about the heat (which, granted, it was a bit warm in his room but he was really on about it). So. Small strokes in the part of the brain that helps to regulate body temperature. Huh. Who knew. 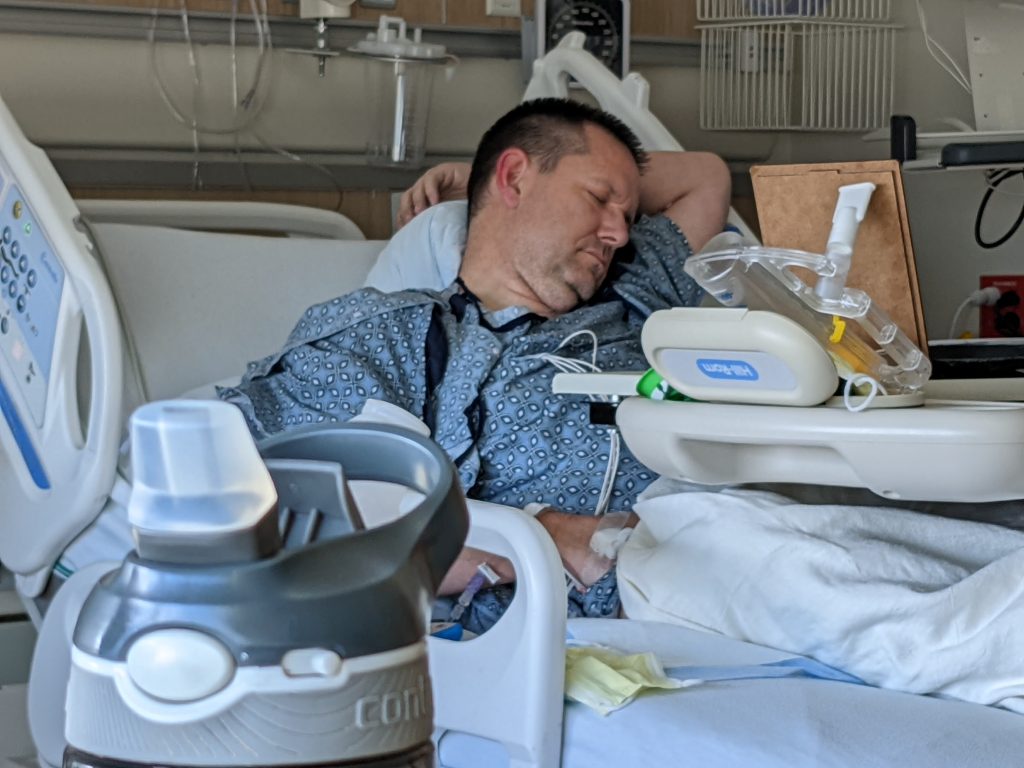 I mean, right now, he’s just napping. They did have him in a chair early yesterday, but moved him to the bed after the MRI in case he was dizzy from the anti-nausea meds. He’s been in the bed ever since, with the exception of two PT outings, walking him up and down the hall, and various “get out of bed into this wheelchair to go get something scanned.”

I think I remember they said yesterday they do want to limit his movement since he’s a fall risk, and now that he’s attached to the heparin — that needs to go everywhere with him even though he can be unhooked from everything else. And they don’t want him falling and busting something open and bleeding all over the place. 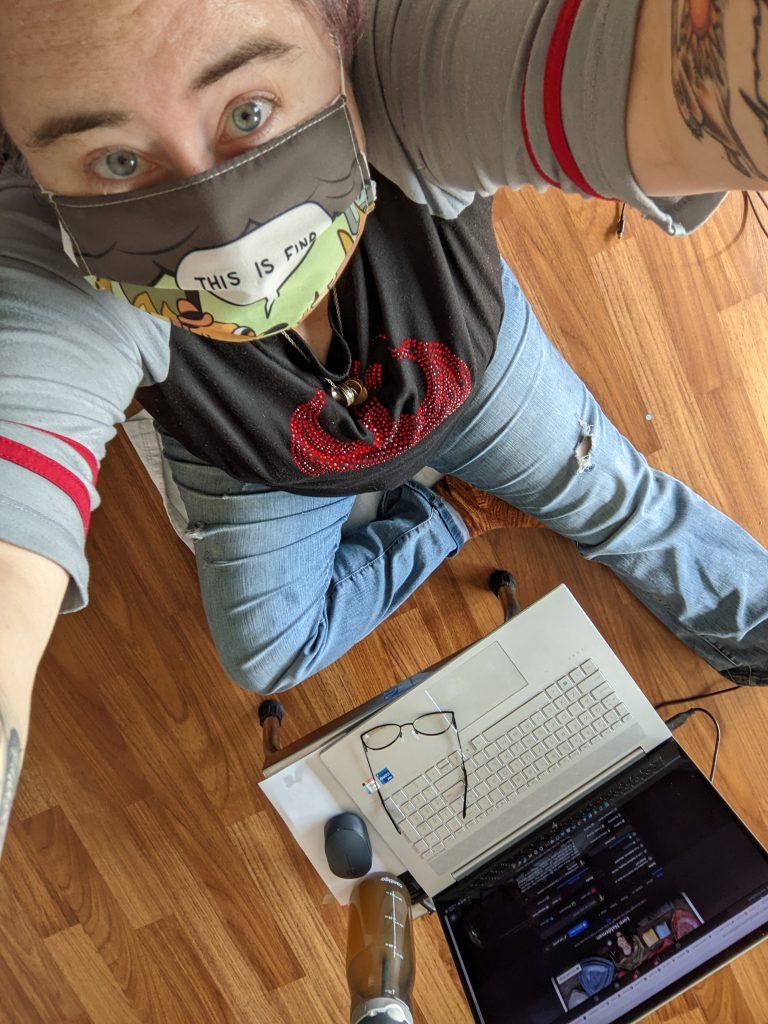 So far today has been pretty slow, other than talking to the doctor a few hours ago. They checked his blood around 12 for the heparin and said he’s doing really well on that dose, and will check him again at 6. I’m trying not to be overly worried about how tired he is (he DID just have a bunch of strokes, after all) and how slow he’s moving (he talks slowly, anyway, when he was tired pre-stroke, so it’s not that this is really unusual as much as maybe me being a worry-wart. Again, he DID just have a few strokes. A friend tells me that swelling is the worst in the first 72 hours after a stroke, and that it will cause headaches and also make him sleepy. She also is vacationing in St. Augustine this week and says that if I need her to drive over and knock some sense into some doctors, doctor-to-doctor, she’s on it. 😉

I didn’t really think about how many health care worker friends I have until my CRNA friend Kris started messaging me for details, and then this other friend, and then I have two friends who are OR nurses (one here at Shands, although she’s off this week but has offered to come up if I need anything), my ex-step-sister who was an ER nurse and has had questions and advice, my cousin and two other friends who are labor & delivery nurses…. I guess I know who I want on my zombie apocalypse team!

Ahh – he’s running a bit of a fever, that might explain why he’s a little sluggish, too. The nurse is going to come check on him, I’ll keep everyone posted.

She doesn’t think it’s much of anything – she’s getting him some Tylenol, and turning on a fan for him. It is a little warm in here — this room is a lot warmer than the one we were in upstairs, when I was freeeeeeeeeeezing.

She also turned the AC down in the room a little, agreeing it was set a little higher than usual. They’ll come and check his temp again in about half an hour

I guess I might go ahead and go home a little early??? He seems a little cranky, and cranky Tim isn’t fun Tim… but he also seems pretty good, much better since the room got colder. For someone who doesn’t like the snow, he sure doesn’t like it when it’s too warm!

Today they were talking like since they can’t figure out where the clots are coming from, they are talking about closing the pfo (it’s a very easy procedure, they say, it looks like a little umbrella that opens up and seals the hole) before they let him leave the hospital this time (remember how North Florida wanted to do that, but outpatient? In about a month, after wearing monitoring equipment?). Also, he will probably be on heavy blood thinners for the rest of his life, so… imma have to watch him around those chainsaws. And sharp kitchen things. And everything, really. Can I just put him in bubble wrap??? 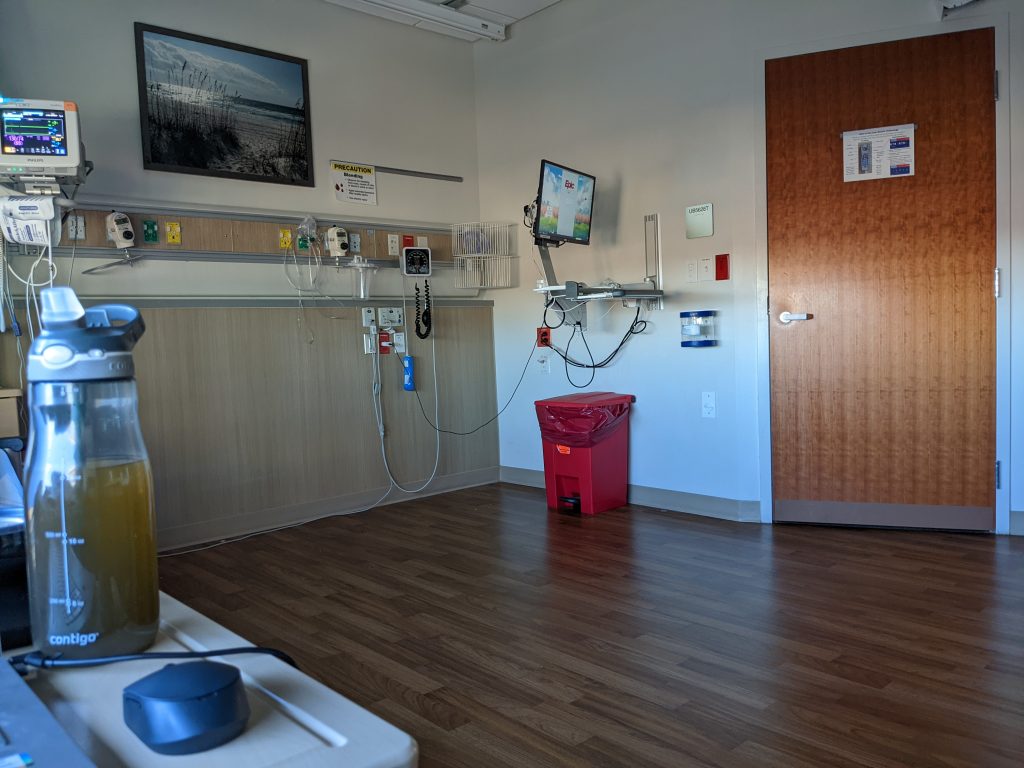 The rooms at Shands are pretty generously sized. At least, that’s what I thought before there was a ton of equipment in there with him a few weeks later…! But the size of the room is really brought home when they would wheel him out in the entire bed, and take him down for scans. Then? Large and Empty. A bit lonely. A little post-apocalypse-y.  The thing I found fascinating, though, was that everything is connected. I could watch his vitals on the monitor in his room even when he was getting scans four floors down.

Meanwhile, I was also texting back and forth with Denise and Tarrant, about stuff I needed to get done before Jenny showed up with Tim’s parents.

I really need that catio put together, but Jenn and Duane said they might be able to come do it. I need to figure out where to fucking put Tulip, too, I don’t want her in the guest room with Tim’s parents, so I need to figure some shit out. I did get some vacuuming done, and I’ll do the rest tonight. When is the 29th? What is today?

And if the house isn’t perfect, if there’s no food, there’s no better people to have that happen with than Tim’s family.

So all I really need to do is vacuum the living room (and my bedroom, Newt knocked over a plant), get Tulip out of the guest room, burn or sanitize or exorcise the bed she’s been sleeping on so it doesn’t smell like cat for Tim’s parents, and laundry everything that smells like cat pee. I hate our cats right now. Want a cat?

I’m good right now, thank you – tbh I think what I’d do is let Tim’s family fuss over Tim, while I go into town and go to Publix. It would make me feel a little normal to do grocery shopping, and I wouldn’t be worried about Tim because his family would be with him. 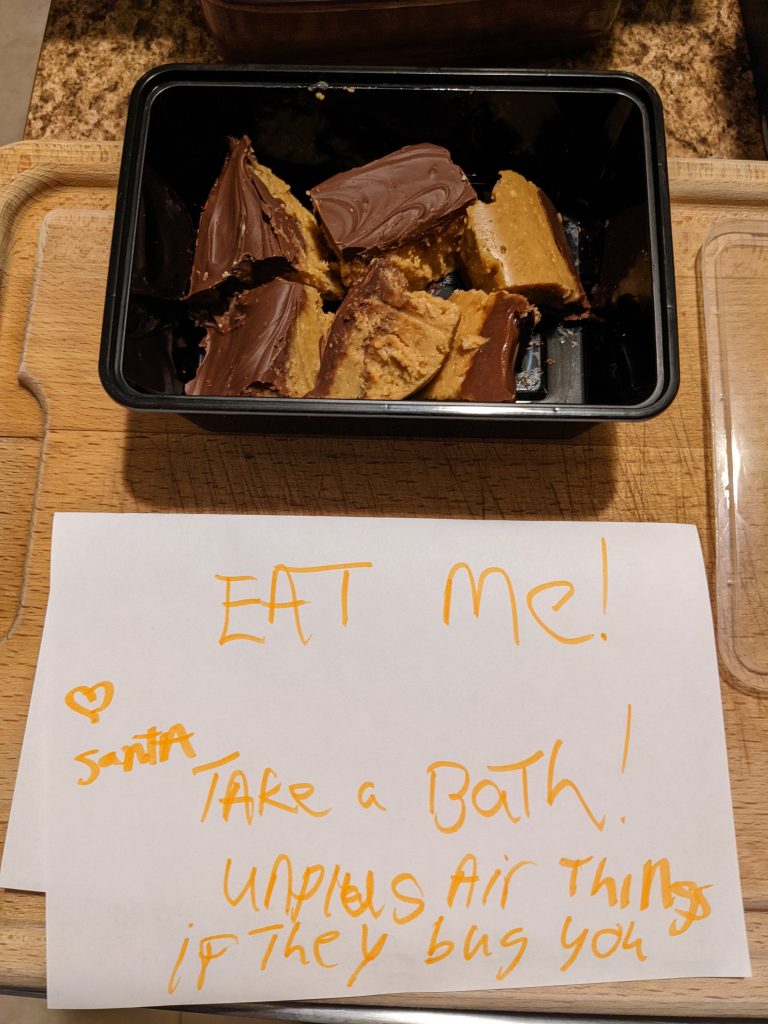 Then, when I got home….? Denise and Tarrant had come into my house while I was at the hospital, done most of the things that I’d mentioned to them plus more, and left me fudge, and a note to take a bath. Well. I tell you what. I’d been holding it together pretty well for the previous ten days but this? This is what finally got me to cry.

Then I took a bath. Newt had a heckin’ concern about that. 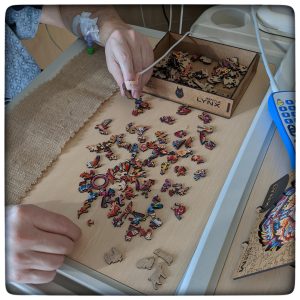 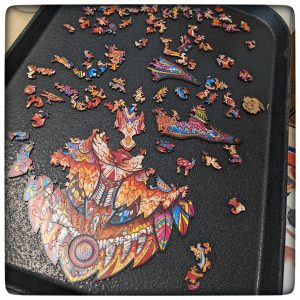