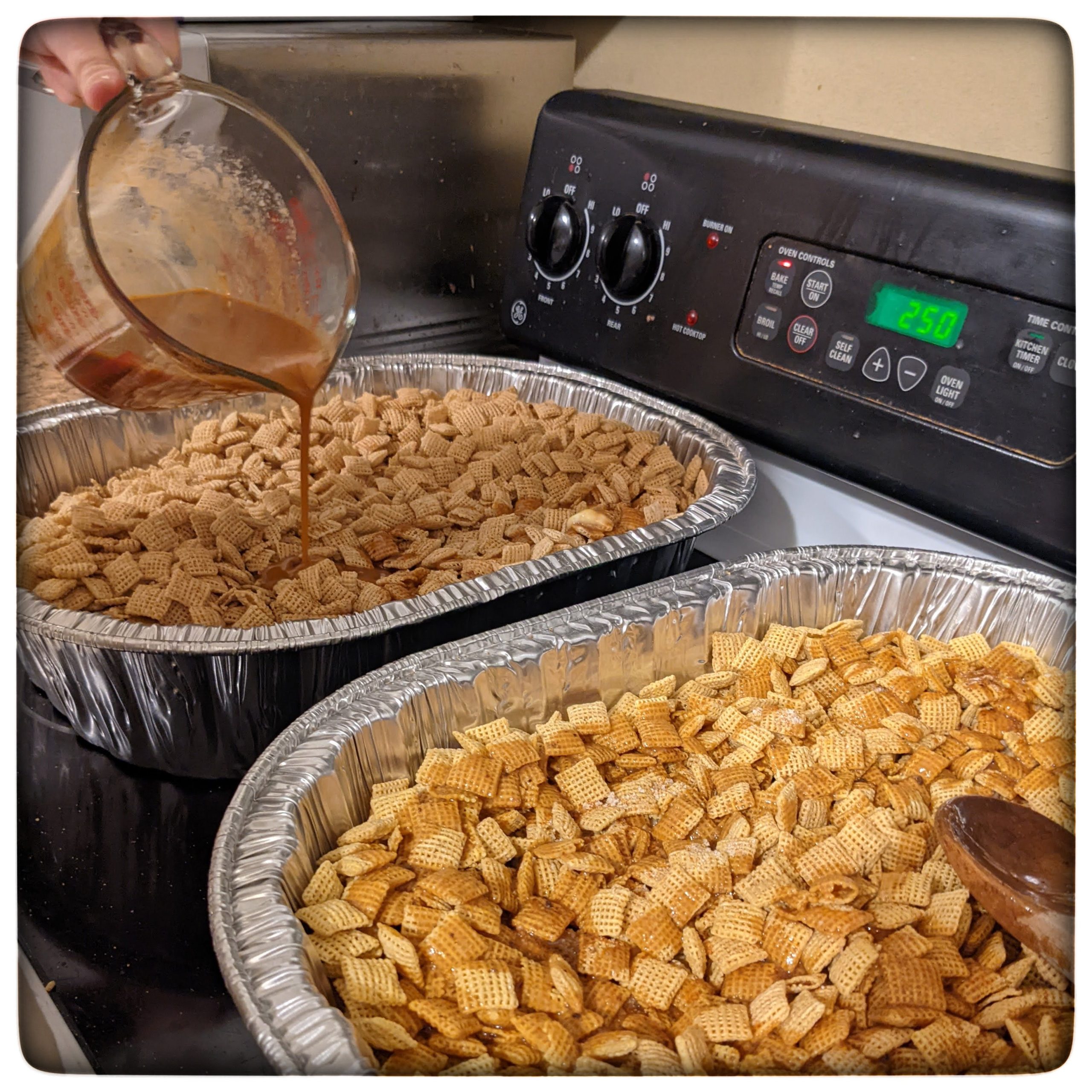 The first thing that happened the first morning Tim was home, is that I’d ground my teeth so much I guess I loosened my crown, and it came off when I took my bite guard out that morning. Good thing I was wearing it, because without it I might have full-on broken another tooth! 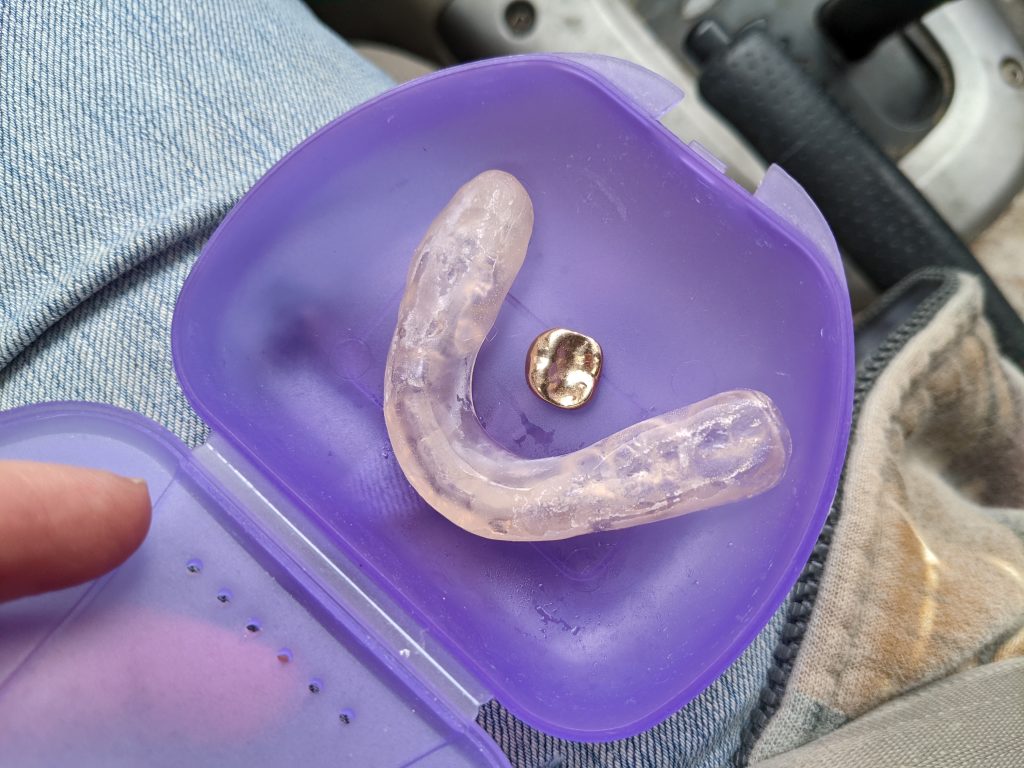 My plan was to drive Tim in to work, go to the emergency appointment I set up with my dentist, and then go by Tim’s work and sit and stare at him until he was ready to go home. However. He insisted on driving himself into work. The doctors, he kept saying, had cleared him to drive, and cleared him to go back to work. So why don’t I just stay home, take myself to the dentist, text him when I’m done with the dentist, and if he’s tired and doesn’t want to drive, he’ll let me take him home.

Then it’s one foot then the other
As you step out onto the road, steppin’ on the road
How much weight? How much?
Then it’s how long? And how far?
And how many times before it’s too late?
Calling all angels
Calling all angels
Walk me through this one
Don’t leave me alone

If we had known, at that point, that every single heartbeat he was having was a chance for him to have another stroke…? I wouldn’t have even let him leave the hospital, let alone let him drive to work and spend the day there.

But we didn’t. So I did. And I got my crown fixed and came home and Tim came home early and that was that. 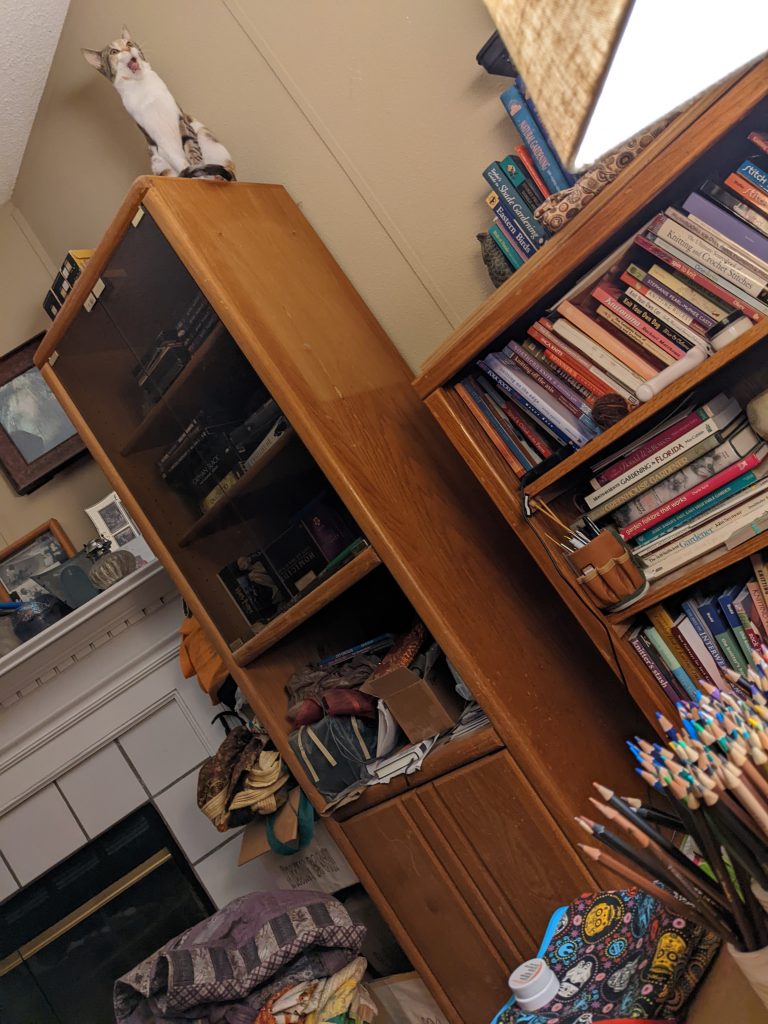 The night before, the night he came home, he fell asleep on the couch almost as soon as coming into the house. I was flipping channels, and O Brother was on, and he woke up long enough when hearing “Damn! We’re in a tight spot!” to ask if we could watch it. I spent the rest of the evening watching it, while he napped on the couch.

I also spent the time wondering. Was he really OK? Was this really like some sort of fluke stroke, and we’d caught it in time, and everything was going to be fine now? But what if it wasn’t fine? What if he had another stroke? Did we totally just dodge a bullet or did we just… get out of the way on that one, but there’s another one coming?

He slept out on the couch that night, I didn’t wake him. I went to bed, but every time I even half woke up, I came out to check on him. He was always still sleeping, and didn’t look troubled, so I would leave him be.

Then I woke up and had that Tooth Emergency. So, like I said, he’d insisted on going to work. I went to the dentist. I came home. He came home early. We spent the rest of the late afternoon and evening talking and watching TV. When he’d come home, I was sitting in his green recliner, reading, and he sat down on the little couch next to me and asked if he could ask me some questions.

Now, I’ve told this story to a couple of people, and I get it. I get that I am a writer, and sometimes downplay some things and stress other things to make a point and tell a story and pull an emotion out of the reader. I get that the people I’ve told have laughed and thought I was pulling their legs. But, no.

And every day you gaze upon the sunset
With such love and intensity
Why it’s almost as if
If you could only crack the code
You’d finally understand what this all means
But if you could
Do you think you would trade it all?
All the pain and suffering?
Ah, but then you’d have miss
The beauty of the light upon this earth
And the sweetness of the leaving

Tim started asking me about what feelings feel like. He was having these thoughts, these … he thought maybe they were emotions? What is it when you feel this kind of heaviness about not having done something you’ve wanted to do for a long time? Regret, Tim. That’s regret. Regret that you have not done a thing, and maybe tinged with fear that you’ll never have the time to do the thing.

OK, then, so what is this feeling of expectation, like when you’re at a restaurant and you’re waiting for your food to be brought to the table, only you’re just in the middle of your day and you’re not expecting anything? But it feels like you are? Uhm…. Tim, are you talking about excitement of starting a new thing, or of finally getting to do a thing you’ve wanted to do for a long time? Of the elation you feel right before starting an adventure?

Well then, what is this feeling, it’s almost like what I feel when playing with the dog, only it comes up when I think about people? Well, Tim, I’m pretty sure that would be affection, or love. If you are feeling tender towards someone, as if you want to keep them out of harm’s way, and celebrate everything about them that makes you smile? Yeah, that would be caring about your fellow peoples.

OK, he would say, we have to stop talking about this now, I don’t know why but I feel like I’m going to cry, so I’m going to go into the other room. Thanks for your time.

We had variations of that conversation a couple of times a day, on the 21st, 22nd, and 23rd. Something about the stroke he had, had apparently, instead of locking something up like I had seen in other friends and family who had strokes… it knocked something loose.

But then, also, from my point of view….. who had I been married to? Granted, I’d only seen him cry once (when he was telling me that Billy was at the firehouse when they got the 911 call and it was for their dad, that time the scaffolding had collapsed underneath him… Tim was so proud of his older brother, and the people Billy saves on a daily basis, but also so sorry that Billy had to take that call, and saddened at how scared Billy must have been, and Tim hadn’t been there to help). So I knew he wasn’t a deep “feeler” (unlike me, lordt, I am ALWAYS deep in my feelings!) … but what, then, had he meant all the times he’d said he loved me? What did love feel like, for him?

Anyway. Emotions. We talked a lot about them in those three days. The whole time, though, me being afraid he might still have another stroke. Afraid I’d come out to the living room in the morning and he’d be dead, or worse, incapacitated, on the couch. Afraid this ordeal wasn’t over yet. So every day, every time we had a conversation like this, I tried to tell myself… at least we have this. If things happen, if things change and go badly, at least we’ve had this day, these two days, these three days, for him to learn what most people learn years, decades before.

On the 22nd, I made Chex Mix. This will be important later in the month and on through January, as I didn’t have time to put it in individual containers and mail it out to my loved ones like usual. I wound up with this being my primary diet for pretty much most of January. Good thing I like my own Chex Mix! 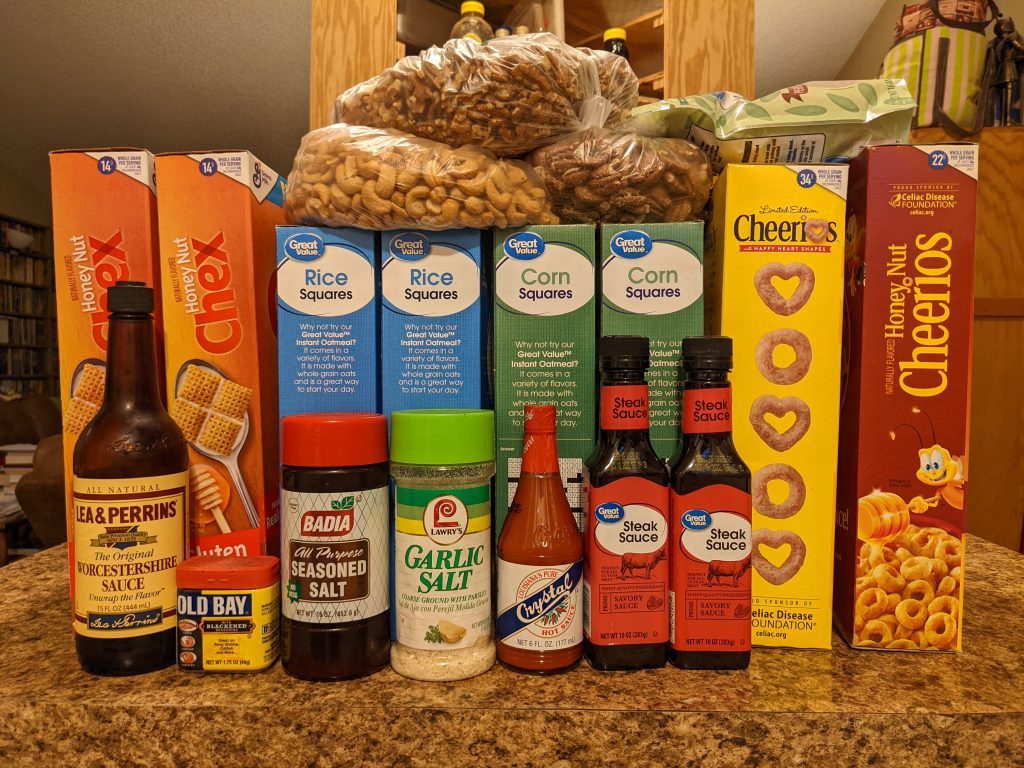 On the morning of the 23rd, Amy texted me to say she was going to be in Gainesville, and was there anything that Tim and I needed out at the property?

No, I said, but your stupid brother is at work, and I bet you that if you went by there and give him a hug, you could get him to cry. Having never seen her brother cry, that thought made Amy cry. She went by to hug him, and after, said that yes, indeed, he had been struggling not to cry.

I knew this, because he had called me from work. Amy had come to see him, he said (I hadn’t texted him to tell him she was coming), and he didn’t understand why he couldn’t stop crying after she left. Was there something wrong with him? No. No, Tim, there’s something RIGHT. What you’re feeling is a combination of love for family, awe that the little sister who you called “Hey, Kid” for most of her life still loved YOU enough to just come by and hug you after your health scare, and relief that you’re CAPABLE of hugging someone and not laying unresponsive and paralyzed in a hospital bed. These are all perfectly normal emotions to be having right now.

Who doesn’t have emotions??? I mean, I know we always joked the guy was Data, but… damn.

Then, on the evening of the 23rd, I wrote this on Facebook –

Thank you, everyone, for your love and support, and those of you who have been asking about him (Chris and Sharon, he giggled at the Lego set!). Here’s a quick update!

He’s doing really, really well. Like, *really* well. Like, he’s going into work, well. (I KNOW). If you didn’t know he had two strokes on Saturday, you would honestly just think he was a little tired. And he does get tired easily… as if he couldn’t already nap, anywhere, any time, now he’s REALLY into napping. Is competitive napping an Olympic event? He’d win.

When he’s very tired, he moves a little slow, he has to reach for words, but that happens to almost everyone when they’re extremely tired, and he’s been getting extremely tired pretty quickly. That’s just his body’s way of saying “slow the fuck down, my dude.”

He already has follow-up appointments set with both a cardiologist and the Stroke Institute, so he’s not slacking on continued care.

And his kitten can’t take her eyes off him. ❤

The next morning, everything changed. 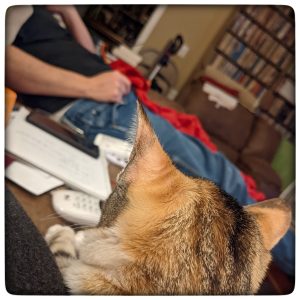 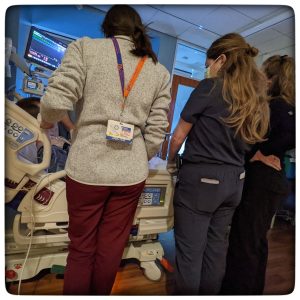