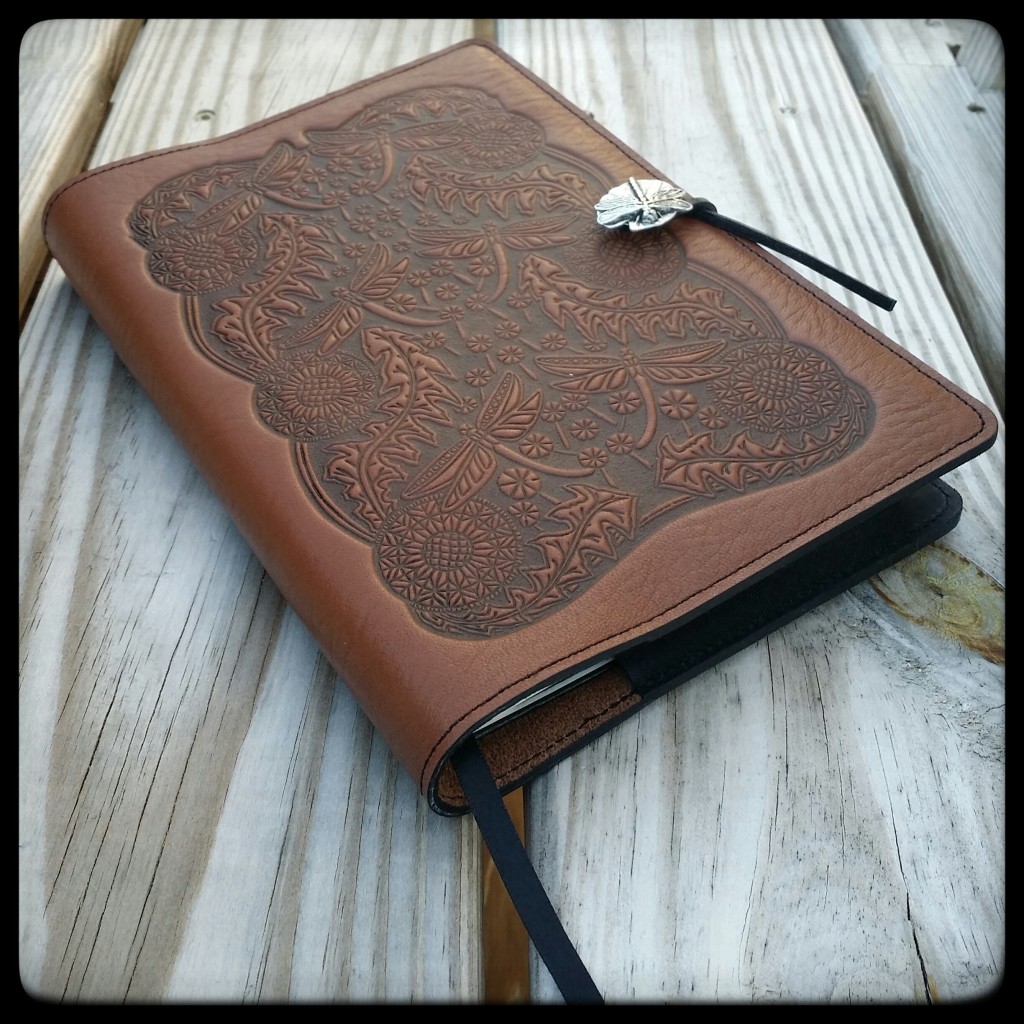 I really liked the hound one (#1 in the picture of the last post) but when I was ordering the planner cover, I also already had a quiver on order that would wrap around the front cover and hold pens; it was just barely a different shade of brown, and I wanted the two leathers to be as close in color as possible. So, while I liked the intricate design – it totally looked like a sweater I would knit – I didn’t choose that one. (Side note, the company I was ordering the quiver from suddenly stopped making them or something, and my order was cancelled. WHOOPS.)

I really, really liked the tree (#3 in the picture from the last post) and I loved the celtic knots around it (again, knitted cables!). But I felt there was too much blank space above and below, with it being a square design on a rectangular book. And again, I had that quiver on order; if it hadn’t been cancelled, and I’d used it, it would have been covering about a quarter to a third of the cover of the book — so to start with an image that wasn’t covering the whole front already, and to think about losing some of it to the pen holder? That was a really hard choice, though, because I really dug that tree.

I was enchanted by #4, the grapes, but although it was the right color (for my now-non-existent pen quiver, hahahahah sob), it wasn’t “celtic-y” enough. No celtic knots/cables. I think that would be better for, say, someone keeping a wine journal, or something. I liked it, and kept coming back to it, but it just didn’t really grab me when I thought about how I’d feel buying it instead of the others.

So – clearly, from the photo at the top – I went with #2, the dragonflies and dandelions. When, as a kid, I would go fishing with my G-ma, she always told me dragonflies were good luck. (Years later it occurred to me that maybe she was only telling me that because I would be quiet when they were around so I didn’t scare them off, and maybe “good luck” really meant “shut the hell up, kid.” Hahahahaha. Oh, grandparents.) But I’ve still always thought of them as good luck, and I love seeing them here on our property in the summer, all fat and languid and humming around. A few of you who guessed noted that I wrap my HaldeCraft soap in dragonfly wrapping paper, and that the majority of my guest soaps are in a dragonfly design. That’s not by accident! Now… Dandelions? Dandelion was the rabbit in Watership Down who helped saved the day at the end. He was the was one of the original Sandleford Warren rabbits, and was the resident storyteller in the group. He was also the fastest runner (hopper?), and was instrumental at the end of the war with Efrafa in bringing the dog up from the farm. (Don’t know what I’m talking about? Go read Watership Down! It’s not just “that book about the bunnies.” Trust me. It’s my stuck-on-a-desert-island book.)

So, that’s the one I chose, and I love it, and it smells lovely, and it fits my journal perfectly — oh, a note on that! They sell different sizes of journals, and they talk a little bit about the different sizes and what journals can go with it. I got what they call the “original” journal size, which is actually thicker than the “large” journal size. The original is supposed to fit a 1.5-inch thick journal, and the large, a .75-inch one… which is what I have. But the cover of the planner I have was juuuuuuuust a titch longer, like, .25-inch longer than the one they gave dimensions for on both sizes. So I went with the larger, thicker cover, hoping that less spine thickness on my planner would make up for the slightly longer cover… and I guessed right. My planner is snug as a bug in a rug! In fact, why am I typing all this out when I could be in the other room, running my fingers over it and huffing leather fumes?

But don’t think I’m not trying to come up with an excuse to buy something of theirs with a tree on it. Now I know why, when searching for Oberon Design on Instagram, I saw so many people who had more than one thing.