I’ve decided that I like my current planning system (a hardcover notebook) well enough that it deserves a nicer cover. I use a Peter Pauper Press Essentials A5 journal, grid-lined, that I found out about while looking over the #bulletjounal photos on Instagram. One person I looked at did a pen and paper review, and this notebook got her seal of approval for no pen leak-through… and it’s only like $10 and so far one seems to be lasting me about six months. The problem? Well, I save them when they’re used up, because many times I need to go back a few months and look something up – dye notes, when did I make something, what colors did I use, yadda yadda. And they all look the same, so sometimes at the end of the day I *think* I’ve picked up my current planner but it’s really one from last year. D’oh!

So I’ve decided I like it enough to invest in a nice cover for it, a refillable cover that I can slip my current planner into and out of as needed.

Who’s surprised that I’m super picky about what I want?

I want something with a pen loop. The only drawback I’ve found about the Peter Pauper planner is that it doesn’t come with a pen loop… so I have to buy one. I’ve bought one from Midori (I think it was about $12, which was more than I wanted to spend for a pen loop, but it’s reusable, so it had that going for it) and what with that metal part that slips on and off, you’d think that would be great, right? Because it’s reusable? Except that the smaller side of the clip has a lip that tips up — so if it’s between the back of the book and the page you’re writing on, you have a small hill in your paper. And if it’s on the back of the book, between the back cover and the desk, the whole side of the planner tips up. So, simple? Reusable? Yes. But designed by an engineer who never actually used it. There’s another one by … oh, gosh, I can never spell it right… Leci… Leuchi…. Leuchtturm! Gosh, why can’t I spell that right? HAHAHAH. Anyway, they make a nifty little pen loop that’s got a flat sticky part that you press to the back of the planner — much better design than the one by Midori, but it’s not reusable, and it’s almost the same cost as the planner (IIRC it was about $8). So every time I buy a new planner, I have to buy a new pen loop, if I stay with that option. I also found a thing called a “quiver” that is part leather, part elastic, and it goes around the front cover of your planner, elastic on the inside, and the leather “quiver” part holds a pen or two on the outside of the front cover. I thought that might work, and I actually ordered one – but then that was the week the company stopped making them, and my purchase was refunded. Derp. SO. If I’m getting a reusable cover, I want a pen loop.

I would prefer leather, because it’s easier to clean cat hurk off it, should I leave my planner somewhere a cat might be and suddenly need to hurk. A cloth cover is just begging to be thrown up upon.

A closure would be nice, so that if I toss it in my purse or my knitting bag, it doesn’t fall open and get things stuck inside it (I’ve broken knitting needles that way).

Etsy and Instagram to the rescue! I’ve scoured both of them, looking at planner covers that people have chosen for their planners, and seen some that I liked, some that were … let’s just say, “not my style”… and a few that I loved.

Turns out I have an affinity for leather planner covers with Celtic designs on them, WHO KNEW. (Wait, I bet you knew.)

I found a company I was thinking about buying from, but the RenFaire was coming up so I held off on ordering until I could see if anyone had anything at the faire that I just had to have. And it turns out there were a lot of options at the faire that I wasn’t expecting! But nothing that really, super-duper grabbed me. If I liked the cover, it didn’t have a pen loop. If it had a pen loop, the cover didn’t do much for me. Most of them didn’t have clasps, and the ones that did looked like weapons you could put an eye out with. There was a really adorable one of a tree, that had a little – WORKING – fairy door at the bottom of it… holy shit, it’s a good thing that was like $250 or I would have come home with it (my cut-off price for what I want is much lower than $250, because in addition to being super picky I am also incredibly cheap. Er, financially conscious).

So after the faire, I got back online, and looked up the company I was pretty sure I’d decided to go with, Oberon Design. They’re a small company out of the Pacific Northwest who started off at faires and primarily does Celtic-style items. Bonus, they sell on Shopify, the same host I use for my shop! It was fate. But oh… decisions! I narrowed it down to nine…. then to five… then to four… 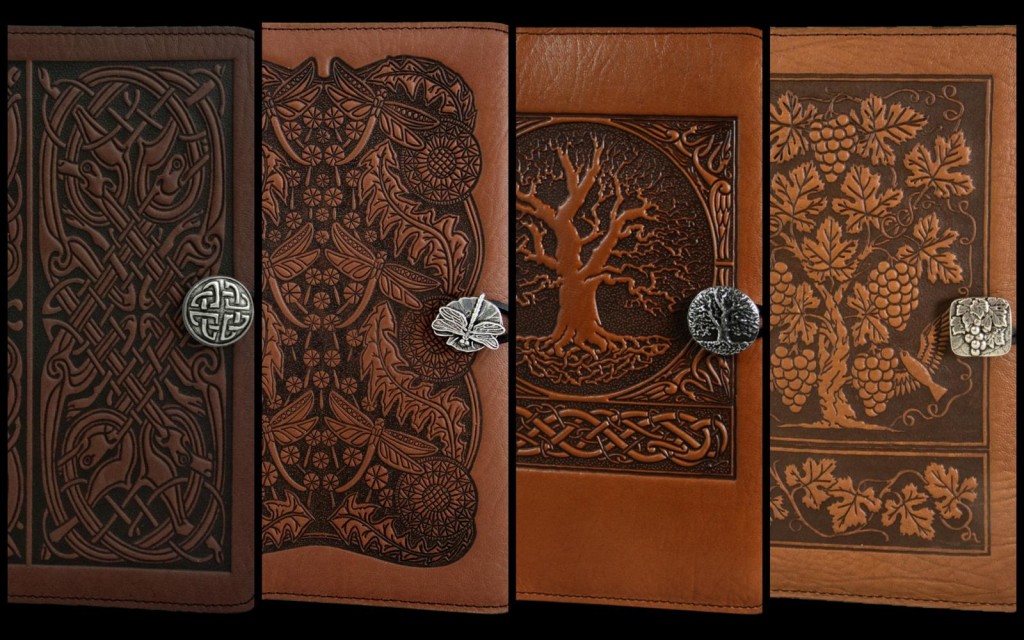 … and then I thought about it for a few more days. Was this really who I wanted to go with? Was that the dollar amount I was willing to go up to? Which one would I have regretted most not buying, if I bought a different one? If I was spending so much time thinking about it, looking them up online to find satisfied (or unsatisfied, of which I found ZERO) customers, searching on Instagram and Pinterest to see pictures of their covers taken by normal people not trying to sell me something…. if I was spending all that time doing that, I should go ahead and buy one if I’m not unhappy when I think about buying from them.

I finally went ahead and ordered the one that called to me the most (but don’t think I’m not trying to find an excuse to buy a checkbook cover, or a phone cover in another style!) and it should be here any day now. Yep. Any day. Nope, not stalking the mail lady AT ALL. Nope. Waiting patiently. Yep.

So. Which one do you think I chose? You won’t win anything, mind you, just the satisfaction of being right. Go ahead! Guess!

(By the way; if you are interested in reading a bit more about my planning system and how, as a working artist and business owner, I use my planner like an administrative assistant, you can check out the Bullet Journal posts I’ve been writing on my work blog.)