I’m not going to apologize for this blog being so silent lately; life is what it is, and I hate reading sporadically updated blogs who always start off each sporadic post with “OMG, I’m like so totally sorry it’s been three years since I updated!”. You guys all know the year I had last year. I’m doing the best I can.

So, if I’d had the time to blog in December, what would I have told you about? GLAM, and dog fights.

GLAM! My favorite craft show was a little different this year, but just as awesome (at least for me, anyway). It was held in downtown Gainesville, so we got a lot of foot traffic, and it was held in a larger location which meant a lot more vendors – many of which, including myself, were outside. And food trucks! And a kids play area, which I overheard many parents thanking lucky stars for, because it meant they could walk around with a beer (a local brewery also had a tent) and look at things while their kids had some playtime.

As I said, I was outside; about fifteen or so vendors were outside, along with the food trucks, beer tent, and other small food stations (oh my gosh, the pretzels! They were so good!). Then there were about another 60 or so vendors inside, in the warehouse.

The vibe was the same, but different… does that make sense? Previously, people have come to GLAM specifically to buy things — there’s been a small entry fee, and even though it was only like $3, people aren’t going to pay that unless they’re coming to purchase. This time there was no entry fee, and I definitely saw more people who were just looking… but at the same time, I did within $100 of what I did last year, so I’m not complaining! I talked with a lot of people, about 75% repeat customers, and gave a lot of business cards away to new customers and people who were just looking. All in all it was a good – if windy – day. 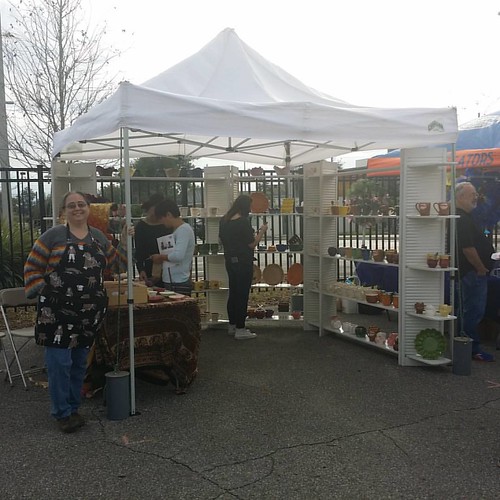 The dogs had a couple more fights in December. One was early in the morning, when Tim was in the shower. Poor man had to hop out of the shower and come separate the dogs, because I was surprised out of sleep by the fight and all I could do was cower in the bed and cry. Seriously, I’m so over these fights. The next fight was a week or so later, when I was home alone, at the tail end of a walk — we were almost to the door of the studio inside Tim’s workshop portion, and they started sniffing where a critter had been overnight. They both couldn’t get to the same sniff spot so they started fighting over it — fortunately there was a furniture dolly right there, so I wedged it between their bodies as they were fighting. Then they couldn’t reach each other except around the head, and they were snout-locked — both of them biting the other dog’s snouts, and neither would let go. They finally separated, and while both were all-over blood, it was just from torn lips. Neither dog was seriously injured, and I kept them separated in different houses the rest of the day.

Which brings me to our new separation rule!

The dogs are only allowed to be together when Tim is home and in the same building with them, or when he is home and they are in the back yard.

So after he leaves for work in the morning, I separate them. Usually I put Corwin in the bedroom, and Lindy has the rest of the house, after I give Corwin her Prozac. Then I take a shower, safely knowing they can’t get at each other. While Corwin is still in the bedroom, I’ll then walk Lindy over to the studio. I come back and let Corwin in the back yard for a few minutes. Then I put her back in the bedroom, where she sleeps most of the morning while Lindy has the run of the studio with me. Before I go back to the house for lunch, I give Lindy a quick walk so she can do her business, then I put her in a crate in the studio. I let Corwin out in the back yard while I have lunch, and then I take her for a little walk around the yard before I bring her over to the studio. Then they’re both in there with me, but Lindy is in the crate while Corwin has the run of the studio. When Tim gets home, he walks both dogs, and then brings them to the house with him, while I wrap things up at work.

This might sound complicated, but really, it’s not. Having the excuse of needing to go get Corwin from the house halfway through my work day is a good reminder to actually eat lunch. And Lindy loves her crate, so her being in there for four hours isn’t much of a big deal – mostly, she sleeps or chews on her rope… or falls asleep after chewing on her rope… and Corwin has normally slept most of the morning, so leaving her in the bedroom where she sleeps isn’t a bad deal for her, either. Between walks, and back yard time in the evening, they’re still both getting enough exercise and time outside to be doggies. And the major bonus is that I’m muuuuuuuuuuuch more relaxed, knowing they can’t get at one another. My biggest anxiety about the dog fights (besides the worry that one of them will kill the other one) is that it happens randomly with no provocation that I can see, and I never know when it’s going to happen. Keeping them separated when I’m alone is calming me down, as well as negating situations where they may fight. The less anxious I am, the less the dogs will pick up on my anxiety and be anxious themselves.

Maybe this new routine will be forever. Maybe it’ll just be for a few months, until I’m not jumping at every sound that sounds like it might be a dog growling… I don’t know. I just don’t know. But I can’t handle these dog fights, I just can’t. So this is helping.

Gah, I have missed you, little blog. It seems like, in times of stress and busy-ness, the things that are best for us (like blogging, telling my far-flung friends about my day, brain-dumping) are the first things to go. Work consumed me from November through January, but I want to punch it back a little and make a spot of room for blogging again.