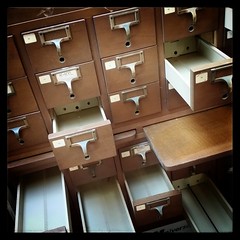 The first thing I did was one of the two things I least wanted to do: tackle the cassette tapes. I have a card catalog full of them. Well; had. I mean, I still have the card catalog – it’s just empty now as I write this.

Dream, if you will, not a courtyard but a card catalog with 30 drawers. Each drawer full of cassette tapes. About 20 tapes fill a drawer. That’s a lot of tapes. *Someone* in this house likes music. What is that, 500 tapes? 600? MATH.

Over the course of six days, I whittled that down to two and a half drawers, and the “half drawer” are tapes that I’ve put the CDs for on my Amazon wishlist, with the thought of picking up one per month and tossing out the CD when I do. Yes, I buy things off my own wish list, don’t you judge me, Earl. The rest of the tapes are mix tapes made for me by friends and/or are things I can’t replace (like the tapes my mom made for me of Alice in Wonderland and Through the Looking Glass, off of albums I used to listen to incessantly when I was a child). Book on ALBUM! What are albums? Go ask your parents, kids.

I’m surprised it only took me six days. I was going to give myself ten; three drawers a day. It was easier than I thought, though, once I got going. It turns out that the majority of them were from days when I drove a lot more than I do now; when I lived in Reston but worked in Alexandria, or lived out at The Farm but worked in Gainesville. Most of the tapes were ones I made off of CDs when I had a car that didn’t have a CD player, so that I could still listen to my music as I drove. Then because I could no longer listen to music in the house after my tape player was stolen (and I got a replacement CD player, but it didn’t have a tape function), I bought some of the tapes again in CD form if I didn’t already have them. There are probably a couple of cases where I had the album, bought the tape when I got a car with a tape player, and then bought it in CD when those became the dominant life form. Now I’ve burned most of that music into MP3s on my computer. This may make music the thing I have most spent money on, other than food and books, over the span of my lifetime. Interesting.

Anyway. I would say that about 75% of the tapes were ones I made off CDs to listen to in the car; I already have the music in CD/MP3 so I pitched them without remorse. Then a handful were ones that The Training Husband left behind (do I feel guilty about throwing out his White Lion and Def Leppard? NOT AT ALL. If he’d wanted them in the last 15 years he coulda called me.). Another handful were ones that I do want to replace; I made a list on Amazon and kept them to remind me – then as I buy them in CD form I’ll pitch those, too. A small handful were ones that I don’t even know why I had. (Seriously? Who are The Lightning Seeds? Why do I have two of their tapes? I don’t remember them at all, and listening to a sample of an MP3 brought back nada.). Another handful were ones that I had apparently bought just to get one song, and as I was making a list as I threw things away, I’ve already gone ahead and bought those 17 singles as MP3s and downloaded them to my computer. And then, like I said, I plan on keeping about two drawers worth, although the majority of those tapes are mix tapes made for me by friends, and I’m willing to bet I have most of that music on MP3 as well, so I could always just make a play folder for them. But they were made for me. I know, getting rid of the tape isn’t getting rid of the friend; I get that. But.

Probably the comics; that’s the other thing I most least wanted to do (“most least”? Whatevs, you know what I mean.). Best to do those things first, rather than worry over them until the last.

Previous post Dear Coffee; it’s not you, it’s me