Recently someone said to me, “as long as you don’t start shaving your pits, then I wouldn’t know you!” and I had to just blink and keep my mouth shut, because it’s my LEGS I forget to shave. I’m definitely a pit shaver and always have been. TMI? Possibly. Also kind of funny, see “then I wouldn’t know you.” Uh, clearly, you don’t.

We were at a girly get-together, and I’d made a joke that my girlfriends who got me into this Jamberry nail thing are turning me into such a girl that the next thing you know I’ll start shaving my legs. The first time I heard these nail wrap things mentioned, was back in March. I overheard Sharon talking about it to Lala, and on the way home That Poor Man was all, “did you hear Sharon talking about some sort of nail thing?” and I was all, “yeah, and thank GOD she wasn’t talking to me because my hands are way too busy to get into nail polish stuff.”

I used to be into nail polish. Starting in my teens, and going until about mid-twenties. But it chips, and it stinks, and I was always out of nail polish remover, and it’s messy, and blah blah blah. Eventually I quit wearing it on my nails when I got a job in a document production department and was typing for hours a day; it would just chip right off so what was the point? I think I kept doing my toenails for about another four or five years until I realized nobody ever SAW my toenails except for me and Tim, and it didn’t seem like the kind of thing he noticed… and so then the last time I was out of nail polish remover I just let it wear off and never put it back on.

Aaaaaaaaand then. And then Sharon had one of those online parties. The kind of party that the women at the Engineering company used to have all the time, in person, like Pampered Chef and Candlelight and all that crap that really, please, just give me the catalog and tell me how much you need me to order and leave the the fuck alone. Don’t make me come to your stupid party and play stupid games and get lectured on how my life would be so much better if I bought a cucumber scented automatic potato dicer. This party that Sharon had was online, and it was even suggested that you wear your pajamas and be drunk for it, and hey, those are two things I’m good at!

So I went to the online party from the safety of my couch, and Sharon’s friend, a Jamberry rep, sent me some free samples when I said that yeah, a lot of the designs are neat and stuff I would have totally been into years ago, but now I use my fingers way too much in way too many dirty things (clay, dye, soap, more clay) and there was no way some plastic thing glued to my fingernail was going to hold up to that. I had kind of assumed it was some sort of polish deal, because my Pinterest feed is full of friends pinning fancy-ass stuff to do with your nails that involve three jars of paint, a toothpick, and scotch tape. Turns out these are heat-activated wraps; thicker than scotch tape but not as thick as a band-aid, and you heat it to set it and trim it around your nail.

Here are the samples after about ten days in clay, and heavy handwashing in hot water – 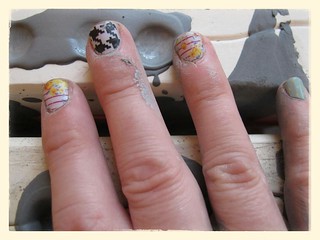 While the samples weren’t my “style” (do I even HAVE a style?) I decided to give them a shot. Especially since our friend Lala became a rep for them (a link to her store is a few paragraphs up). Since then, I’ve tried… 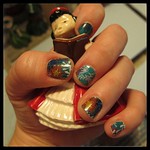 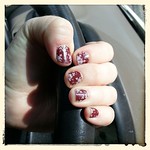 Under the Sea; Queen Anne 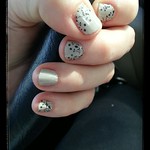 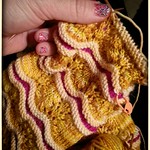 So. I’m not hooked, by any means — at the gathering I mentioned above I was probably the one with the least number of sets to her name. But I like them. I can see that I would use them more than nail polish, that’s for sure. They come in enough funky styles that the ones I would be likely to get (IE, not the French Tip things) would match a variety of my moods. I would recommend them to my friends, if Sharon hadn’t recommended them to all my friends already! (We have a large number of mutual friends, go figure.)

If you’re reading this and you haven’t tried Jamberry and you’re curious, feel free to ask any questions. This post isn’t about trying to get you to buy them, though, it’s more about “shit I’ve been doing in what spare time I do have”. Because I have a few spare minutes to write a blog post! Who am I!?