File this under “things you shouldn’t see on a computer you bought five months ago”: 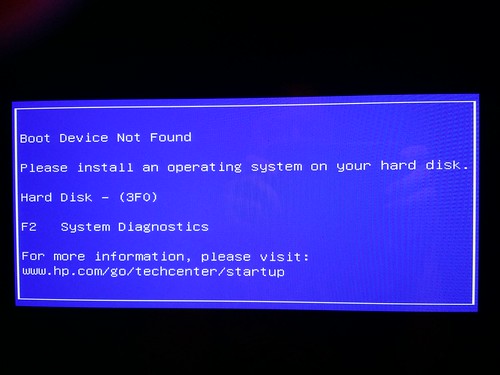 I think that was… last Tuesday or Wednesday. Now, I backup everything to an external hard drive once a week, but on some Facebook recommendations I went ahead and signed up for Carbonite and left my computer running (and Carbonite back-upping) until we left for the convention on Friday. Sunday night when we got home, I got the same message when I turned my computer on. Restarting it booted it up correctly (just like it had the previous week), but it is clearly going to go at any second… and I was worried mostly only because of two things I needed the hard drive for — Quarterly sales tax, and yarn club.

So Monday I didn’t do what was on my to-do list, but did my quarterly sales tax instead. Yarn isn’t completely wound yet or I would have tried to send all that out early, too… instead I just did sales tax and then turned the computer off and took it back to Best Buy. Where of course it booted up fiiiiiiiiine the three times he turned it on while I was standing right there. Of course it did. Fucker.

I was thinking they might need it a week to replace the hard drive; turns out that since it’s under warranty, Best Buy has to send it back to HP, and it might be 2-3 weeks until it comes back to me (or never, it’s HP’s call – if they trash it, though, they give me a voucher for a new one).

Now, I should be grateful. I have a backup desktop computer that I’ve been using as external backup for about eight years now. Occasionally I turn it on, save things to a shared folder on the network, and turn it back off again. I haven’t actually USED it since about the time we opened the yarn store. The poor dear is so old, a rotary phone might have more processing power. Seriously. The first thing I got when I turned it on was a pop-up saying that this version of Windows is no longer supported. It takes almost a minute to switch between tabs on Chrome, say, if I want to switch from writing this blog post to my email for a moment. Last night I was trying to email my mother with about five links in it; That Poor Man came in when I was starting the email, said he was going to exercise, walked SIX MILES, and when he came back I was finally finishing the email. It took that long to copy and paste links.

I should be grateful that most of what I do is either online (Ravelry, blogging) or done on the cloud (Evernote, photos from my phone automagically backed up to Dropbox). Because, for my business, I need information to be accessible anywhere I am in case customers ask me questions and I’m at, say, an event, for the last few years I have tended towards using things (programs/apps) that I can get to and edit on my desktop and/or on my phone and/or on a tablet. So between Evernote and Dropbox and Carbonite and a few other things, I am not inconvenienced by not being able to get to or edit work information.

I am, however, really super duper inconvenienced by being on a computer that’s so slow that clicking on a button to tell it to do something results in ten to fifteen minutes of me walking around the house doing other things while the computer decides it wants to do what I want it to do. Especially when that thing is, oh, yes, please install Evernote. And I feel like a whiny bitch for saying that — I should be grateful I’d never thrown out this desktop even at its advanced age. I should be grateful that technology has allowed me to not lose the last five months of business work, or the last five months of photos. I should be grateful that I live in a house with electricity and Internet at all, right?! Instead, I am beating my head against the desk, fearful that it’ll take me forever to type in and print out the mailing labels for yarn club, and wondering if I should start on that today because if it takes as long as everything else has taken…….

Computer: Prithee, kind lady, what arst thou about?
Me: I just want you to print something.
Computer: Your wish is my command! But I see not the printer I last used in 2005.
Me: I have a new wireless printer. Here’s the—
Computer: MAGIC! TRICKERY!
Me: No, it’s easy, you just connect to the netw–
Computer: HARLOT! WITCH! BLACK MAGIC!
Me: Ok, ok, calm down, look, I found an old USB co–
Computer: WAVE NOT THAT MAGIC WAND AT ME, HEATHEN WOMAN! GET BACK!
Me: … it’s going to be a long, long 2-3 weeks.

Hahahahahahahaah ::sob:: I did find a cord that came with the printer, just for older computers, and while that did result in about 90 minutes of finding and downloading a driver for it, for a computer running Windows XP – so long that the customer I was going to meet with what they had purchased, didn’t come with an invoice, because I didn’t have time to keep trying to get the computer to install the software. I left the house on step one of six, and it just finished when I got back home. Sorry, customer, hope the emailed invoice was enough!

I might have good news, though, depending on how nit-picky Best Buy wants to be. My mom, Benefactor of the Arts, invested in HaldeCraft last night (thank you, mom!!!) by saying it was ridiculous that I should be trying to run a business on a computer that takes me an hour to answer emails, and after they open this morning there should be a laptop waiting for me at Best Buy (in her name, but our first and last names are the same, so hopefully there won’t be too many questions). So by this afternoon, all of the frustration of the last 24 hours should just be an uproarious blog post, and I should have a laptop that I can dedicate to work for the next 2-3 weeks, and then when I get my desktop back (or replaced) I will continue to use the laptop for portable work, weekends away, etc, and use the desktop as my workhorse and storage, finally sending this poor thing I’m on now off to the happy hunting grounds. And if I have to replace the desktop, I’m not getting another goddamn touchscreen monitor, because whatever sadist invented that for desktop computers didn’t have cats who can rearrange all your icons with one flip of the tail.

What are YOU up to this week?