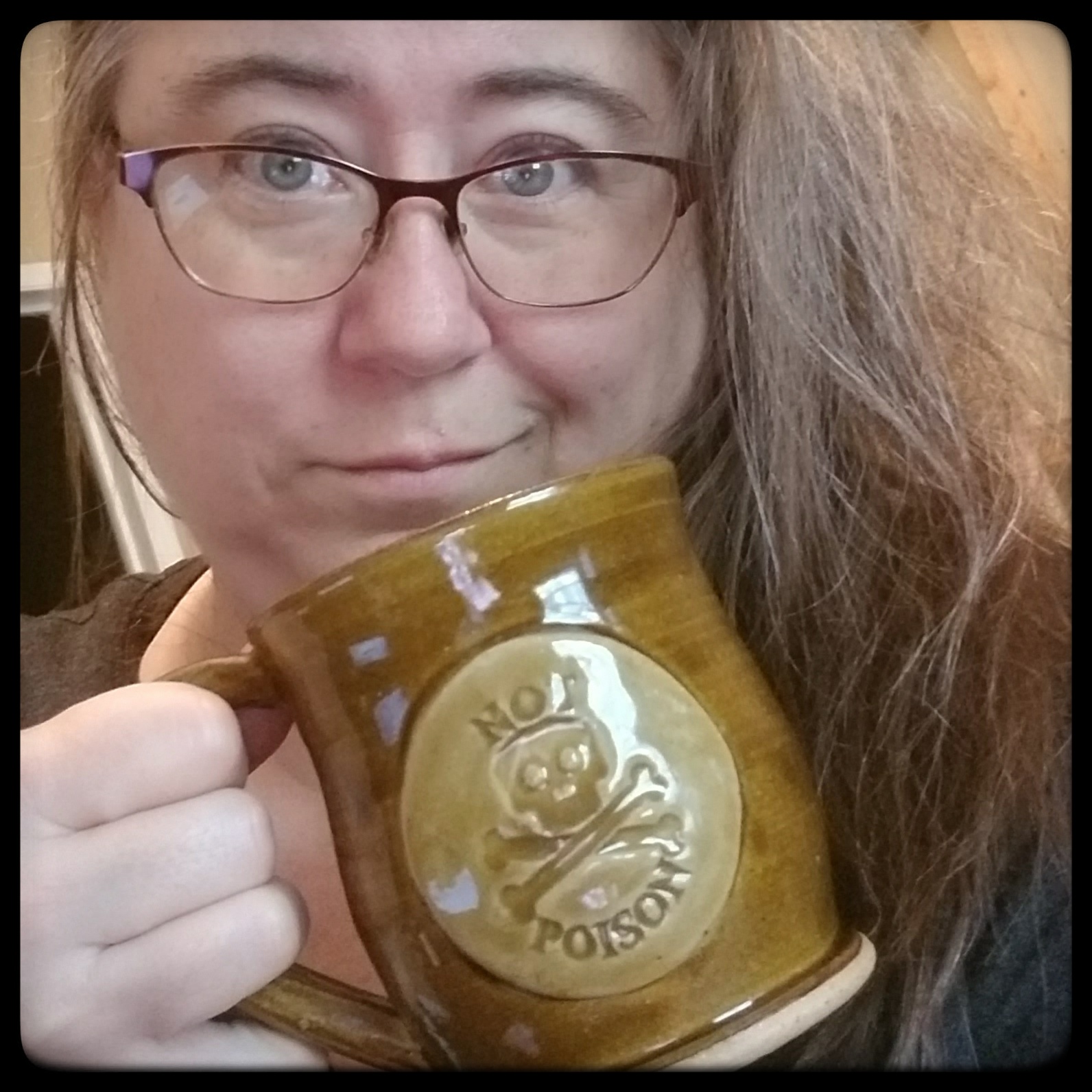 It may surprise you to learn that I’m not independently wealthy. I KNOW. How can a woman who makes baby head mugs and writes serialized science fiction not be RAKING IN THE DOUGH?! It’s true. You don’t choose this way of life to get rich quick. Because I ask people to give me money for things I can’t not make, I love to give other people money for the things that they are also on fire about making (or trade for – the barter system is alive and well in the Maker community).

This is my second Lobster Rose Pottery mug. Yes, the other one I have also says “NOT POISON”… if she’d had them in brown when I first saw them, I would have snatched it up – but this way, I have a brown one now and a blue one… one for the house, one for the studio!

I met Gretchen last year when I went to ICON with Aunt Gay and Uncle Joe. I mean, of course I gravitate towards the one potter in a room full of book and game sellers, right? We hit it off just gabbing at her table, and became Facebook friends, and y’all, she’s awesome and you should check out her stuff. If you know and like me as a person, you would probably like her as well, because we seem to think in a lot of the same ways.

Another potter I’ll happily spend my hard-earned dosh on is Dancing Pig Pots. While she primarily sells at RenFairs around the States (including the Maryland Renaissance Festival, where a lot of my DC area friends spend a whole lot of time), lately she’s also been doing a line of what she calls “Rage Mugs” and y’all, this is definitely something I can get behind.

And if you follow my personal Facebook account, you already know that I just donated to the Kickstarter campaign of an artist I’ve been following on Instagram for a couple of years – Lyndsey Green. She’s doing an enamel pin set inspired by Watership Down, and y’all know how much I love me some Watership Down. I’d bought her print a year or so ago and I’m excited to add these pins to my collection.

OK, that’s all I have time to gush about this morning… plus, I’ve probably just made you spend most of your paycheck, haha. And this barely scratches the surface of the other Makers I like to support! What about y’all? Who do you like that you think I might never have heard about?

I have more than a couple thing saved in Feedly….

The Art of Neil Gaiman

31 Essential Science Fiction Terms And Where They Came From

Candid Videos Of Astronauts Being Dorks In Space Are Just Adorable (OK, this one’s not fiction)

What Are The Actual Greatest Moments In Science Fiction And Fantasy?

New List Of The 250 Greatest Moments in Sci-Fi, Horror, & Fantasy Is Sure To Cause Some Arguments

The Greatest Friendships From Science Fiction And Fantasy Television

What’s The Greatest Speech In Science Fiction And Fantasy History?

10 Science Fiction Tropes We Will Never Get Tired Of

Odd Details From The Matrix We Didn’t Notice Until Today

67 Science Fiction And Fantasy Movies To Watch Out For In 2015!

The Ultimate Guide To 2015’s Science Fiction And Fantasy TV

How Product Placement Took Over Science Fiction, From E.T. To Star Trek

The Most Deadly Drinks in Science Fiction

Every Time Travel Movie, Ever, Ranked

Clearly I need to do these on a more regular basis, this is a little out of control!

I have so many things saved in Feedly it’s getting embarrassing. Here are a few things I’ve been meaning to share but have just never gotten around to…

The Secret Life Of Sally Ride, The First American Woman In Space

50 Female-Directed Movies You Should Watch, Part 1: The Mainstream

50 Female-Directed Movies You Should Watch, Part 4: The Kitchen Sink

If You Want To Get Angry, Watch This “Women In Refrigerators” Supercut

Geek Guys: This Is Exactly How You Hassle Geek Girls, So Stop It

The Greatest Black Women In Superhero Comics (Who Aren’t Storm)

“Strong Women Characters” Who Made Mistakes (And Learned From Them)

Most feminist moments in sci-fi history

GeekDad speaks out about Gamergate

Who Wrote Women Better, Davies Or Moffat? Neither, Says One Professor

10 Female-Directed Movies to Look Forward to in 2015

“It’s [Not] Okay”: How Women Die In Comic Book Movies

Hermione Granger and the Goddamn Patriarchy: A Feminist Re-Imagining of Harry Potter

Holy shitballs, y’all — I knew I had a few links, but not this many! Feel free to bookmark this post and come back to it over the next, oh, month, for lunchtime reading.