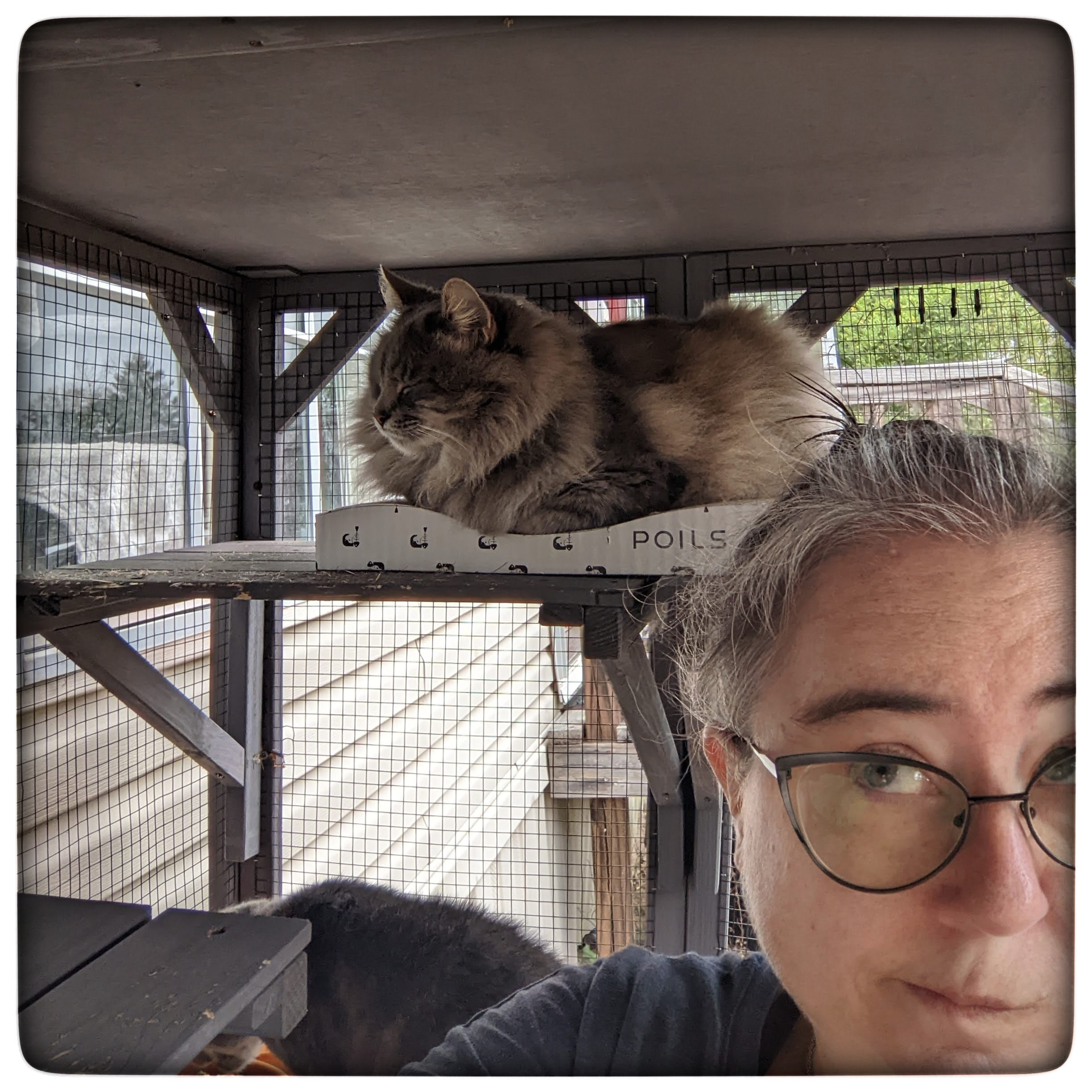 This was… not a great day. At this point I had sort of stopped asking the universe “what else” or “is that all you got” because every time I jokingly said something like that… shit got worse. So I stopped even jokingly saying it. And yet… shit still kept getting worse. What the fuck.

In the blink of an eye I saw you bleed,
Through the thunder I could hear you scream,
Solid to the air I breathe,
Open-eyed and fast asleep.
Falling softly as the rain,
No footsteps ringing in your ears.
Ragged down worn to the skin
Warrior raging, have no fear.

Well, Tim had a more exciting morning than I would have wanted him to have. About ten minutes before I left this morning, I got a MyChart update and I checked it so I’d know what was going on when I got in, and what was going on was that Tim was having some air trapped on the right side of his lung, which collapsed that side, causing a pneumothorax, a fancy and scary name for a collapsed lung (from Doctor Google: “Pneumothorax is air around or outside the lung. It may result from chest trauma, excess pressure on the lungs or a lung disease, such as chronic obstructive pulmonary disease (COPD), asthma, cystic fibrosis, tuberculosis or whooping cough. In some cases, the cause is unclear.”). You’ve probably seen this happen on, like, every episode of ER ever, but it’s really not nearly that dramatic. Or unexpected, according to the doctors, who went out of their way to reassure me that this is not an unexpected event… it’s just, like, one of the three things Tim hasn’t checked off his bucket list yet, right up there with UTI (hasn’t had one yet) and… and … well, I’m sure there’s at least one more thing he hasn’t done yet.

I waited around at home because I was pretty sure they’d be calling me about this one, but they didn’t call in 15 minutes so I went ahead and started driving into town. I was a little over halfway in when they called, but at a convenient somewhat-abandoned looking building that I was able to pull off in front of and talk to the doctor for a few minutes. They needed verbal permission to do a chest tube (again, from Doctor Google: “A chest tube is a hollow, flexible tube placed into the chest. It acts as a drain. Chest tubes drain blood, fluid, or air from around your lungs, heart, or esophagus. The tube around your lung is placed between your ribs and into the space between the inner lining and the outer lining of your chest cavity.”). I didn’t want to wait to give permission in person or sign something, since I was still about 15 minutes out, not counting parking (which took about another 20, good lord, THIS PLACE) so I gave permission over the phone, and by the time I was able to get parked and get up here, they were just wrapping up and he was coming out from under sedation. 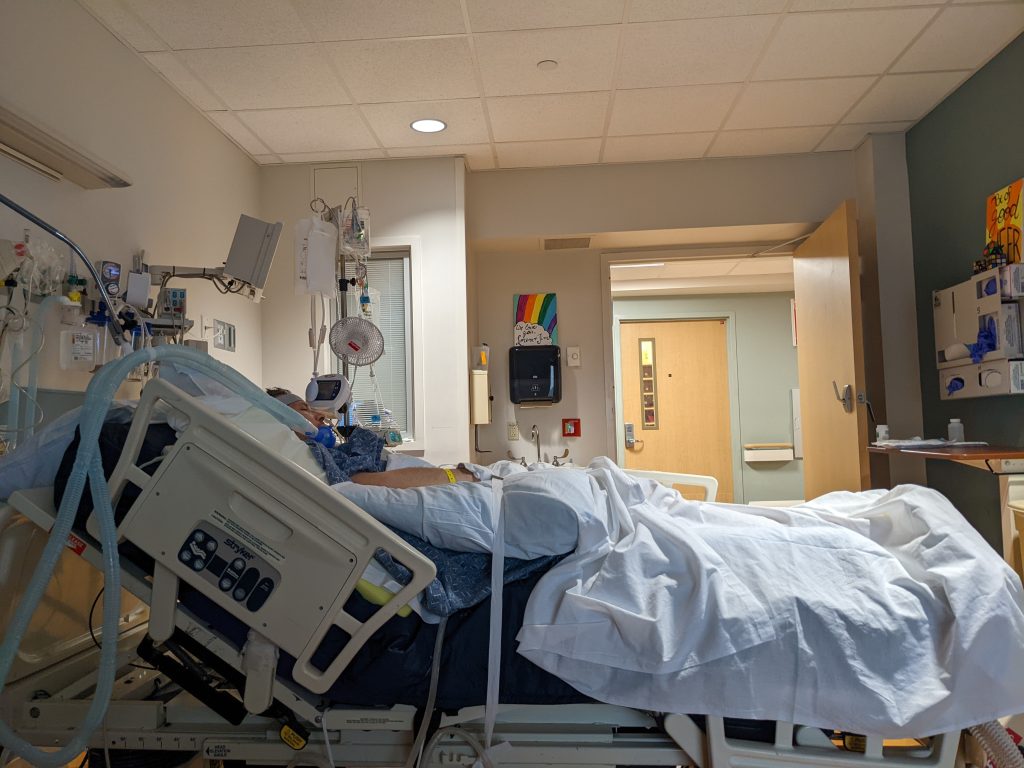 Secure yourself to heaven.
Hold on tight, the night has come
Fasten up your earthly burdens,
You have just begun.

He’s pretty sleepy now, although he still doesn’t want me to turn off the news. But he’s pretty much just sleeping. I know from previous push sedation that yeah, the sedation leaves his body pretty quickly but it does make him pretty tired for the rest of the day.

It sounds like they’re not going to do any therapies with him today, because of all this. Also, Delgado just came in and talked with me for a little bit (every day he looks a little more sorry and a little more afraid of me, and you know what? HE FUCKING SHOULD. Pardon my French). Tim’s Creatinine numbers for his kidneys are still rising (from Doctor Google: “Creatinine is a waste product made by your muscles as part of regular, everyday activity. Normally, your kidneys filter creatinine from your blood and send it out of the body in your urine. If there is a problem with your kidneys, creatinine can build up in the blood and less will be released in urine. Generally speaking, high levels of creatinine can indicate that your kidneys aren’t working well. There are many possible causes of high creatinine, some of which may be a one-time occurrence. Examples can include things such as dehydration or intake of large amounts of protein or the supplement creatine.”). Creatinine levels “For adult men, 0.74 to 1.35 mg/dL” and his has been climbing over the last four days from 3 to 5 and now up to 9. So they’re going to need to start temporary dialysis. Are you tired of Doctor Google yet? “Hemodialysis is a treatment in which blood is filtered through a dialyzer, also known as an “artificial kidney.” While the blood flows through the filter, fluid is removed and the blood is subsequently returned to the body. Dialysis can temporarily serve the same function as kidneys until your own kidneys repair themselves and begin to work on their own again.” I just had a long talk with the kidney doctor’s PA about temporary vs. permanent dialysis, and I’m feeling a lot better about it than I was a couple of days ago when Delgado first floated the idea. It sounds like he’ll get two hours tomorrow, three on Wednesday, a full four hour treatment on Thursday, and Friday off. Then start again on Saturday. They’ll check his numbers every day, before and after dialysis, to evaluate how it’s working and how long they might have to keep him on it.

Kneeling down with broken prayers,
Hearts and bones from days of youth,
Restless with an angel’s wing,
I dig a grave to bury you.
No feet to fall,
You need no ground,
Allowed to glide right through the sun,
Released from circles guarded tight,
Now we all are chosen ones.

Anything else….? I got nuthin’ else, y’all. Stick a fork in me, I’m done like dinner. Yesterday I walked around the property a little bit, and Troublesome came to find me, worried about me being out in the wilds on my own.

I wish… I wish they had talked in a more frightening way about the dialysis. I wish that they had told me that once we started with it… that was it. Maybe they didn’t know? Maybe they thought so, but didn’t want to say anything because they weren’t certain? I wish… I wish I had been more negative, more afraid of the dialysis than I had been. Also, dialysis was nothing like what I thought it was. But more on that when we get there.

Secure yourself to heaven.
Hold on tight, the night has come
Fasten up your earthly burdens,
You have just begun. 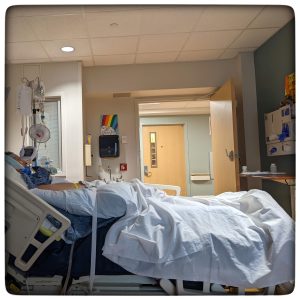 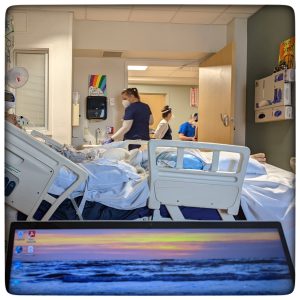