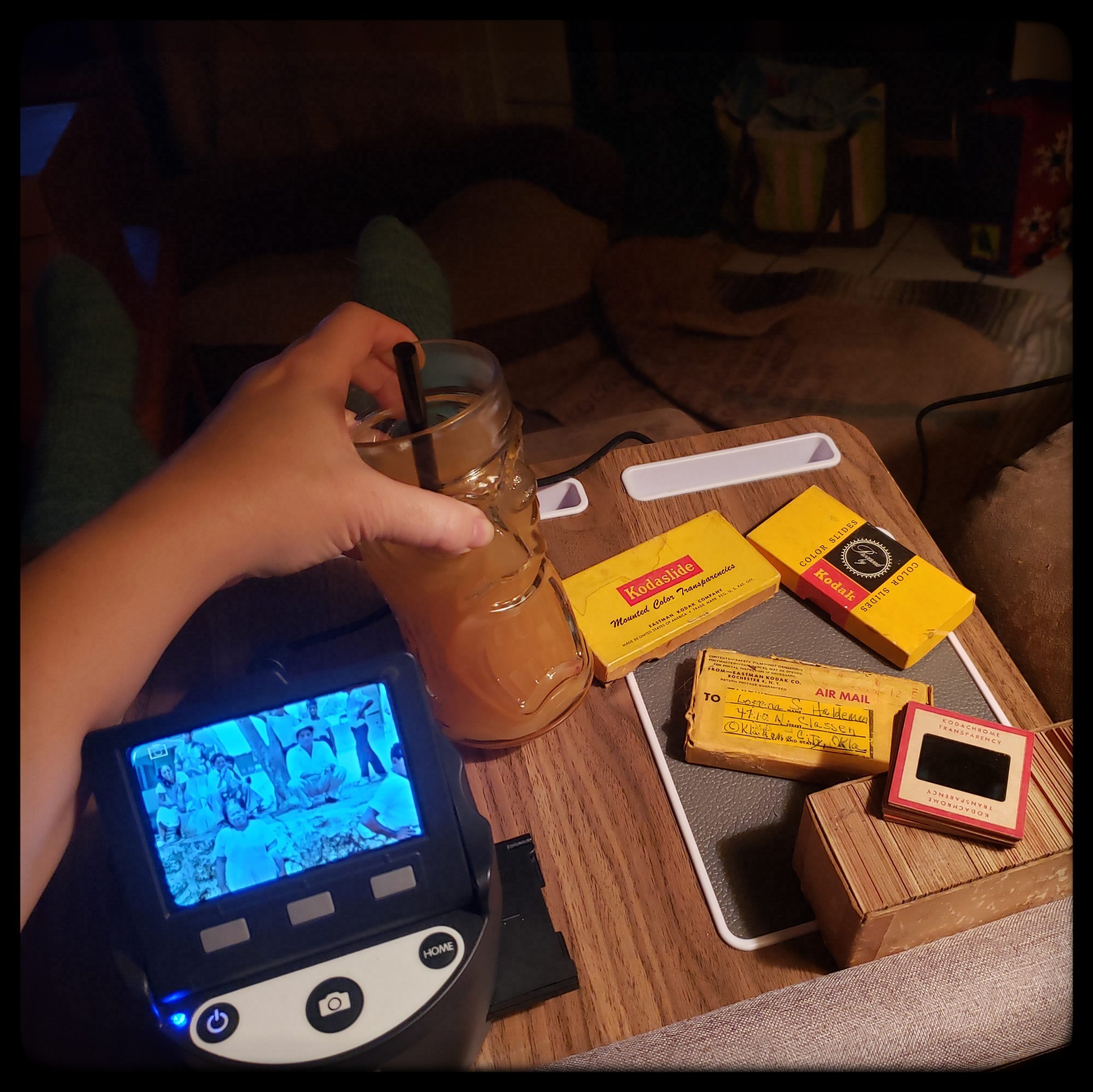 I thought, with yesterday’s scare of thinking I’d lost all the slides I’d just scanned in, that I’d write a little bit about the process I’m going through to scan.

I mean, it seems pretty easy, right? Hook the scanner up to the computer? Scan the things?

Let me start by saying that in spite of everything I’m about to bitch about, I really like this scanner. It was about $50 more than I wanted to spend, but I’m really happy with it overall.

I started scanning these in… February or March. On track with my goals for the year. Then we had this little *waves arms wildly* thing happen. And right at the beginning of the lockdown (and the dystopian science fiction reader in me still can not believe that “lockdown” is a daily word that comes up in casual conversation right now) my laptop died. Well, sort of. The casing broke – if I shut it, there’s no way I can get it open again without risking breaking the screen.

I run my business off the computer, so, I decided to order one online. Our state had just, maybe the day before, gone into lockdown and I didn’t know if Best Buy was considered “essential” or not, but I didn’t want to drive an hour to find out, and then put my fingers all over display laptops that who knows how many other people had touched. So I ordered one online.

I don’t know if I’ve ever bitched about this part of the story, but they sent me the wrong laptop. After about a week of back and forth – I mean, I needed a fucking computer that works! – they gave me a small refund and I quit yelling at them. I mean, it was essentially the same computer, but with 500 g instead of a Terabyte of memory. So I did have to buy an external hard drive to make up the space I needed. I carry the laptop back and forth from the house to the studio and in the house from the couch to my office, and I needed that hard drive space, so I also bought some velcro and attached it to the outside of my (sadly still sticker-less) computer. (I didn’t buy any stickers at first because I wasn’t sure if they were giving me a refund or if I was supposed to send it back and they send me another one, and I didn’t want to adorn it if I was sending it back. Since then I just haven’t had the energy to pick out new stickers and order them.)

Oh – and this is foreshadowing, but – the new laptop has three USB ports, and an HDMI port, one of those tiny worthless SD mini (?) ports, and for some reason, a USB C port (?). But not a disk drive, and not something I can put a regular SD card into. Like the SD card that the scanner I bought needs in order to work, because it has no internal memory of its own.

But, good news, everyone! I have a weird little converter thing that I can put my SD card into, and it’s got a USB connector, so I can just put it into one of the three USB ports in my laptop! I mean, I’m only using two of the three, right? One for the external memory (which I need to save the card info to, because there’s not enough room on the laptop – I can’t even transfer to the laptop and then to the external drive. I need to transfer directly from the card to the external drive. But I have to plug them both into my laptop to get them to see each other. Yay? Are you confused yet? Anyway, so, I’ll just plug that in.

Oh. Whoops. Guess that converter isn’t going to be able to fit into the port that’s right next to the one for the external hard drive. That’s OK, there’s one on the other side, and although I use that one for my mouse (because I hate trackpads with the fire of a thousand suns) I can unplug it and use the trackpad long enough to get everything transferred over.

Oh. Well, look what won’t fit with the power cord plugged in? HAHAHAHA.

Because I also need a plug available for the scanner, when I’m using the scanner. It needs two things to be able to work; a power source, and a memory card.

Now, I can, if I want to, use the HDMI cable to attach to the TV, if I wanted to do, say, a slideshow. Or the little …. round plug things. I can’t even remember what those are called, it’s been so long since I’ve used one. AV cables?

I can allegedly also do some kind of magic between the HDMI cable and one or two of those plug looking things in the upper right corner in the photo above, if I want to plug the scanner into a wall socket. Which I can’t do without an extension cord because of where the couch is and where the wall plug is (but then if I do that, there’s a good chance the dogs are going to trip over and/or pull it out of the wall). So plugging it into the computer with the USB cord is easier. If only the USB cord would also work as a transfer cable from the scanner to the computer! Then I could maybe save things directly to the external hard drive! Alas, the scanner is built to save to one thing and one thing only – the memory card (that you have to buy separately).

But wait! Don’t you still have the laptop that works fine except that you can’t close it? Yes! Yes I do! It even has a reader for the SD card! So why don’t you move it over to where you’re scanning things on the couch in the evening? And plug the scanner into it, and then every evening when you’re done scanning, put the card in and transfer everything over? Well, that’s what I *was* doing, before it broke.

But now there’s there’s one thing I can’t do with this laptop… close it. There’s not a good place near the couch for me to have a laptop that’s open that is also not on my lap. I can balance it on the very small side table, but it’s easily knocked over by an excited dog or a fast-moving cat (or god forbid they knock my tea over onto it). And we have one cat who loves her a heat source, and will lay on the keyboard of any unattended laptop. I have tried keeping this open (so that it’s on, and charging the scanner) and next to me and it just does not work if I can’t close it halfway. If the laptop is not on my lap (which it can’t be if I’m scanning photos, because I need the scanner on my lap to put things in and take things out) it needs to be halfway closed. I can’t close the old laptop halfway. I have to leave it all the way open or close it and maybe never get it open again. I can only close the new laptop halfway. But it doesn’t have a card reader slot.

So. So what I do is sit on the couch, scanner and slides on my lap, new laptop next to me, precariously balanced on a very small table and halfway closed so that it’s open enough to be “on” and powering the scanner, but closed enough that Moya won’t hop on it to use it as a heating pad.

And you know what? Other than yesterday’s fright of the card deciding it didn’t want to be read, this works for me. You may be thinking of a thousand different ways that I could do this. You might be about ready to start typing me a long comment, telling me how I can fix this problem. You know what? Let’s pretend that you did, and I said thank you, but you don’t actually have to load me up with unsolicited advice that I don’t have the emotional energy to explain to you why that won’t work and I know it won’t because I’ve already tried it and it didn’t work so that’s why I haven’t mentioned it above. K? Thanks!

And that’s the story of how I’m doing all this scanning. Which I think I’m going to take a break from tonight, because it’s been a long weekend and I’ve been fighting a migraine all day and I’m just … done. I need a whiskey and a dumb farming game on my phone. Maybe even just the whiskey – I don’t even know if I have the energy to pay attention to my farm. My poor little farm. 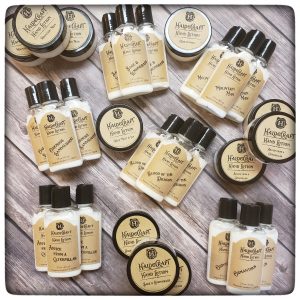 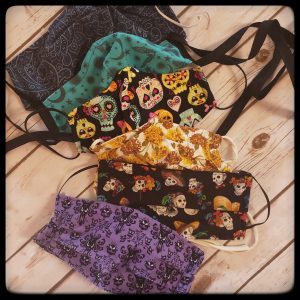