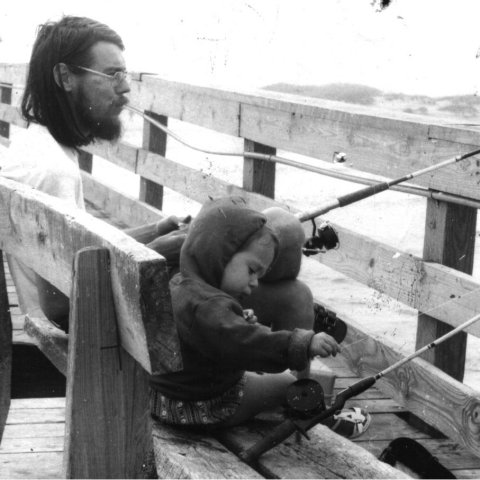 I don’t know why this year in particular – what makes this year any different than the last sixteen – but I’m having a hard time with Father’s Day this year.

I’ve never run a campaign like that because not having a dad any more, and with so many friends whose fathers have also already left the party, I know that sometimes an email like that is a slap in the face. “Ten gifts for the hard-to-shop-for Dad”… are the first nine of those “being alive” and the last one “sexy redhead”? Because if not, feck off.

My dad was a flawed man, but he tried to be a good dad and for a long time he was also a pretty decent mom. He taught me that listening to people’s stories is more important than telling your own… that storyteller songwriters like John Prine, Steve Goodman, and Kris Kristofferson have much to offer… one of his biggest regrets in life was that he wasn’t allowed in the room when I was being born… he was sad that he wasn’t the first person I told when I got my first period… when I wanted to drop out of college he told me that if I didn’t finish at least with a rudimentary degree he would make my life hell for the rest of my life, but that if I at least got an AA degree he would never say anything else to me for the rest of my life (and he didn’t, but I know he was proud when I went back ten years later and got a Bachelor’s, even if I am still paying that shit off AND never use it)… it freaked him out to try to teach me to drive and he decided he couldn’t do it, but he did buy me my first car… and the most important holiday to him was my birthday.

For Father’s Day, we used to binge-watch movies. We’d make a list of all the new summer movies, and see how many we could fit into a day. Sometimes we’d break for lunch or dinner, but some years it’s was just popcorn and soda all day. It was usually around three or four movies, but one year the stars lined up and we were able to cram in six, if I remember correctly. I remember one of them that banner year was the third Raider’s movie, and one of them also might have been the third Alien movie but I could be thinking about a different year (I’d have to check release dates and I’m way too lazy for that). It was fun, though, and sometimes ticket takers would sort of look at us, like, “weren’t you here about four hours ago….?”

Anyway. So for some reason, this year all the Father’s Day stuff is bothering me. It doesn’t always. But… you know, the thing people never try to tell – or at least can’t articulate well – to new grievers is that grief never really goes away. You just get numb to carrying it around all the time, some days so numb to it that you don’t even feel it any more and you laugh and remember and smile and feel like a human. But then like banging your shin at night in the bathroom on that damn counter AGAIN, one day something will happen and grief will grab you by the heart like the very first moment you felt it and all you can do is lean over and gasp for air and hope the feeling passes before anyone really notices.