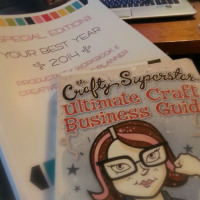 This year was going to be amazing. Back in January, in spite of being worried about Lenny the Boob Pea, I had such plans for HaldeCraft this year.

Part of those plans included expansion, and by that I mean actual physical space expansion (not necessarily product expansion, although that would have organically followed had I had the room to do it). Those plans have still not come to fruition and I feel like a bird in a cage that’s only a little bit bigger than I am. I can’t spread my wings. I’m too cramped. I also feel like I was handed a gift-wrapped package at the beginning of the year of awesome good things for my business and that I never did open the box. I’m not sure whether I didn’t open it because I was waiting until I had more room, or because I was afraid of committing to the next step. It’s easier to say I didn’t have room, but I feel like maybe I’m hiding behind that because saying that I was afraid to jump into the pool with both feet seems a little … ungrateful to that well of creativity that keeps. giving. me. IDEAS.

Have you ever heard of The Artist’s Way, by Julia Cameron? Great book. I loved it, and I feel like doing that 12-week course was what both brought me back to and opened me up to more as far as ceramics goes. I did the book years and years ago, because I heard it was good for writers, and although I started it in order to open myself up to writing, by the end of the book I had started to fiercely come back to ceramics after only dabbling here and there for a few years. I’d had a dream as a child to have a ceramic studio like my G-ma did, only I put it aside because I loved working in bookstores and got sidetracked by the dangling idea of working my way up the corporate B&N ladder to maybe become a buyer for their Science Fiction line (lesson learned: large corporations suck a bag of dicks and I would rather work for myself and be hungry than work for one of them and be eating stress). Hey, guess who now owns a ceramic studio? IN YOUR FACE, BIG BOX STORE.

Anyway. Recently I read Julia Cameron’s biography, and I sort of wish I hadn’t. She’s kind of a loon (albeit a very sweet and caring one). It’s hard for me now to separate how the Julia Cameron of The Artist’s Way, who seems selfless and a conduit to that bottomless wellspring of creativity … can also be so hard on herself, can have punished herself so much with drugs and alcohol and anxiety disorders and bouts of downright dis-association.

And then I think about how I had such plans at the beginning of the year and how I’ve told them to shut up while we wait to see if/when we’re going to move, and I’ve basically sabotaged my own creative output by not committing to it and instead punishing it for being there while I waited on other people to make a decision for me. Maybe what I didn’t like about Julia Cameron’s biography was that I didn’t want to see parallels of myself, although where she was using oodles of drugs to silence herself, I’ve been using the timetable of other people (people whom I love, but still).

Sales have been really, really down this year. They started dipping about the time I made the announcement that we were looking into moving, and they’ve been going down ever since. Yarn Club is really the only thing that’s been selling since the Spring, and while it pays enough to cover itself and more yarn to restock what’s been selling, it doesn’t pay well enough to do that and cover my cell phone, my online shop fees, my advertising budget, and a paycheck. Did sales dip because I wasn’t committing to new things (“I shouldn’t get involved in new things right now, I don’t have the space”), wasn’t committing to restocking (“do I really want to be pouring a lot of ceramics right now? What if we move soon, and I don’t have time to clean and fire everything, and we wind up having to move a lot of delicate greenware?”, wasn’t committing to regular shop updates (no point in updating if I haven’t made or restocked anything), wasn’t committing to offers of more work (“Sorry I can’t take on your special/custom/wholesale order, I can’t guarantee there won’t be a six-week delay if we move in the middle of producing what you want”)? Or did sales dip because some years sales just dip and I’m really reading more into it than there needs to be?

Either way, I am tired of not committing. I need to take responsibility for my own inaction, and instead of putting my energy into waiting, I need to put my energy into producing. After all, I’m a firm believer in what you put out is what you get back, and if what I’m putting out is sitting and waiting, that’s what the universe is going to give me… more sitting, and more waiting. What I’d really rather be getting is more sales, so what I need to put out there is that I have stuff for sale, and it’s awesome stuff, stuff that people need to have.

Now if you’ll excuse me, I’m going to sign off and go move a lot of stuff that’s not selling on HaldeCraft over to Etsy, because while Etsy drives me crazy, it does seem to produce faster first-time sales than HaldeCraft at certain points of the year, and Autumn is one of them. I need sales, so I’m going to go get some.