Now is the time on Sprockets where we talk about three decisions I need to make for my business, but I don’t know which road to take for any of them; or, rather, I probably do, but need to process by writing. Internal HaldeCraft neep ahead. Never mind; I broke it up into three parts, it was getting JUST THAT LONG. 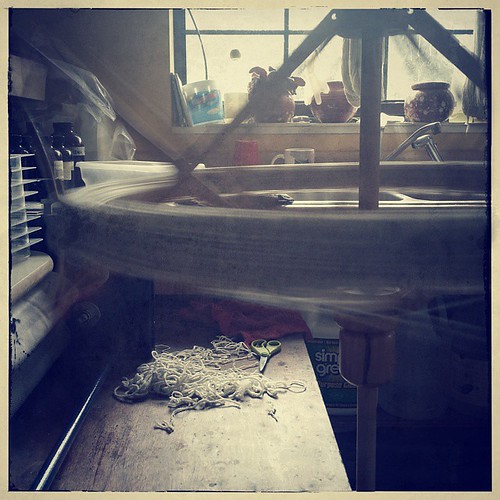 Three things about my yarn line are causing me consternation right now.

1. I feel the need to either change the name of or discontinue my best-selling base yarn.
2. I either need to put a cap on yarn club, or consider stop offering the swag version.
3. I’ve got too many regular colorways for too many base yarns. But I want more colors. And more base yarns.

I feel the need to either change the name of or discontinue my best-selling base yarn. You might or might not know (depending on whether your one of my yarnies or not) but I name my base yarns after my favorite science fiction authors. This isn’t terribly obvious because for the most part I use generic first names, names which many other yarn dyers have used for their yarns because most of my favorite authors are women, and women’s names are popular for base yarns.

However, the name of one of my most popular base yarns is the name of a writer who, although now deceased, is a name that is garnering some controversy around it. I’m not going to mention the name; it’s enough to say that the type of controversy is not one that I want to be associated with. It gives me a sick feeling in my stomach to even dye the yarn, which is stupid, because the author doesn’t have a thing to do with my yarn other than I used her name.

So… change the name of the yarn? OR…. as this is also proving a yarn hard to keep in stock because of distributor issues, do I … discontinue the yarn? I may have a line on a comparable base that actually has a higher yardage, higher weight, and higher luxury fiber content.

I would rather discontinue than rename; if I rename, I’m always going to have to answer “why did I rename it”, and the purpose of renaming would be to distance myself from the controversy (no, I don’t have to answer people, but I’ll get the question just the same). I have other reasons for wanting to discontinue, too, that involve times I have money to buy the base yarn vs. times when that base yarn is actually available for me to purchase (I’ll get more into this in Point 3). And like I said, I may have already found a replacement yarn; higher luxury fiber content, more yardage, tighter ply so not as pilly when worked up.

I’m leaning towards (SPOILER ALERT) using this new yarn as the luxury yarn in my next yarn club, and then bringing it in as a new base and phasing the current one out. BUT… change is scary. Discontinue my most popular base? Am I crazy?

Overall: If I didn’t have to answer to anyone and knew nobody would ask me questions or give me shit, I’d discontinue it and get a new base yarn.

Come back tomorrow for Point Two.