Our Gainesville house is at that awkward, in-between stage where we’ve moved out, but there’s still some crap sitting around for Tim to take to the dump, and small renovations have begun but nothing major has happened yet.

Who wants a walk-through of a messy, kind of depressing place? 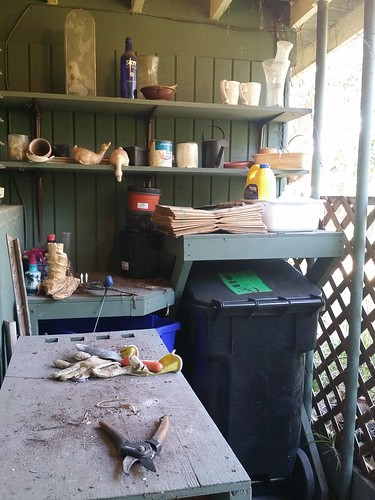 Standing with my back to the front door, here’s the tiniest front porch in the world. We’re going to leave the unit we built that’s directly across from me (that has a bunch of stuff on it that can be thrown out), but take the mobile gardening cart that’s just to my left. 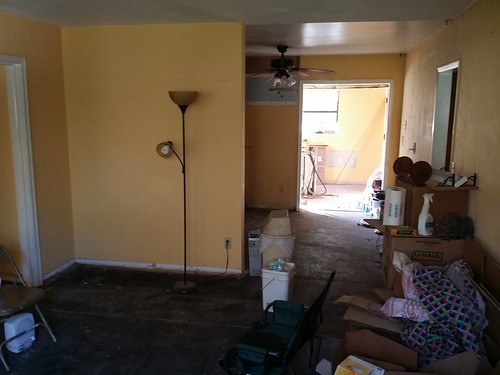 Here’s just inside the front door; living room in front of me, kitchen behind that, dining room and door to the back porch behind that. To my left is a hallway and the bedrooms and bathroom, and to my right is my old office, a couple of small rooms, and the laundry room/bathroom. 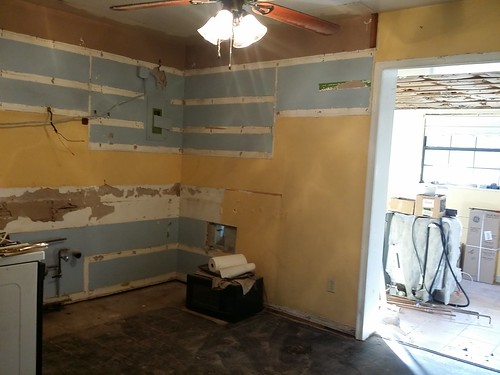 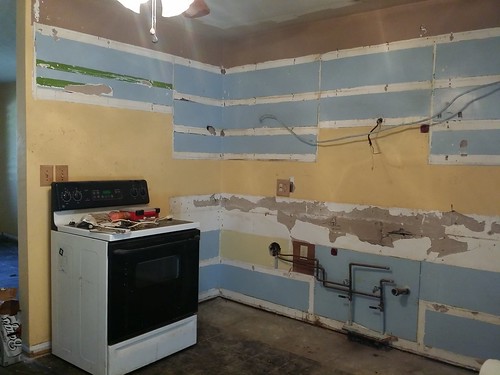 Let’s start with the kitchen! Tentative plans are to turn the wall the stove is on, into a half wall; the stove will still be there, but then above it will be a pass-through to the living room. We’re going to get new cabinets, a new sink, new appliances. 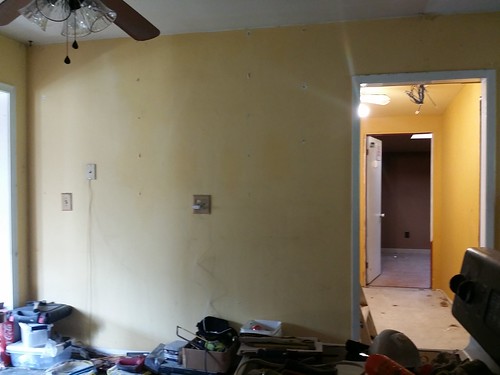 The fridge (again, tentatively), will go against that wall. There’s a weird jog in the wall on the other side that you can’t see from here, and it looks like we could set that whole wall back about 14 inches without disturbing much of the small room on the other side, so we’re probably going to do that, and by doing that gain a lot of kitchen room for more cabinet and counter space. 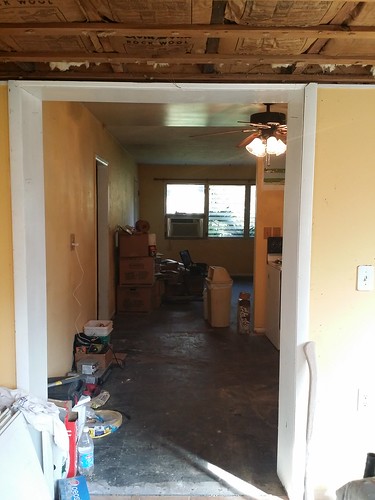 Here’s the dining room, facing the living room and the front door and window. It used to have those popcorn tile things on the ceiling, and Tim’s going to give it proper drywall and make it look nicer. 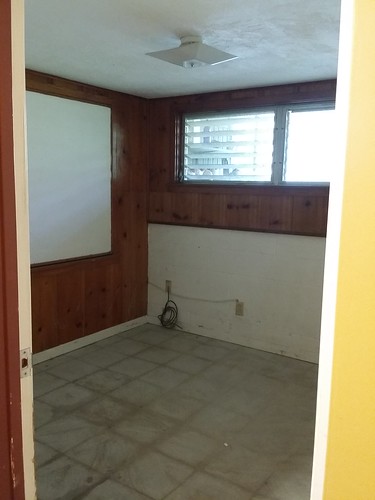 OK, it looks like I forgot to take a picture of the small room just off the kitchen, that we used as a storeroom for a while, and then a library; this is the room that was off of that room (I don’t know if I’ve mentioned, but the house itself is a pretty good size – 1575 square feet or so… but it’s got, like, fourteen tiny rooms. A couple walls could probably come down and make some rooms larger, but… we’ll leave that to the next owner. There’s only so much work we can take, ya know? ANYWAY, this is a small room off the small room. It’s legally not a bedroom because there’s no closet, and if I remember correctly, the people I bought it from told me it had originally been a dining room (they kept adding on weirdly, a la the Winchester House) and the door opened into the living room – the small room I forgot to photograph was a porch that eventually got sucked into the house proper, and another porch added on. 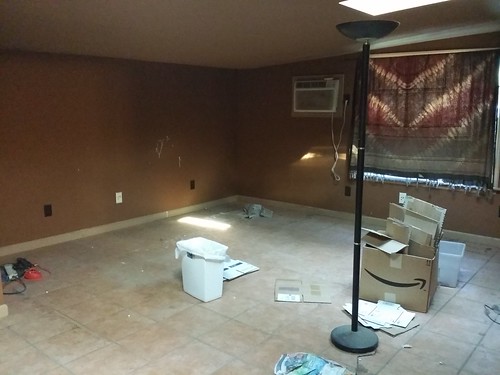 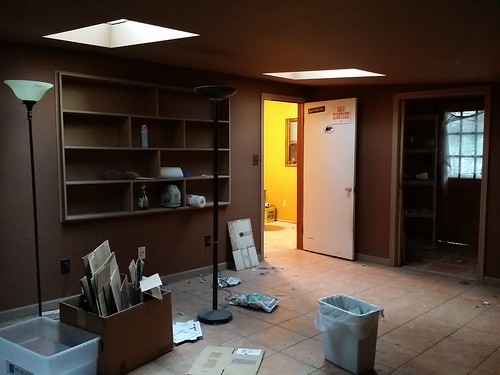 My favorite room in the house! Skylights, and a built-in bookshelf. I didn’t much care for the house when we looked at it, but this room made the purchase tolerable. It’s been a TV/living room, my bedroom for a few years when I rented out part of the house, my rentor’s bedroom when I needed to rent it out again, and my office. I won’t miss much about this house, but I’ll miss this room. 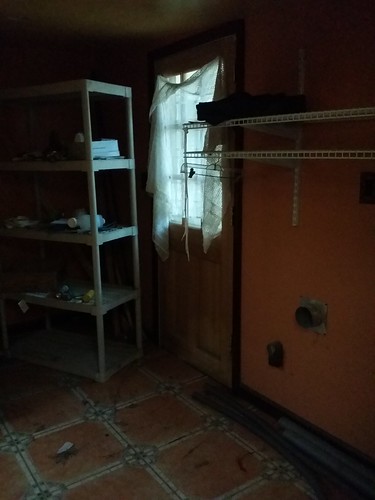 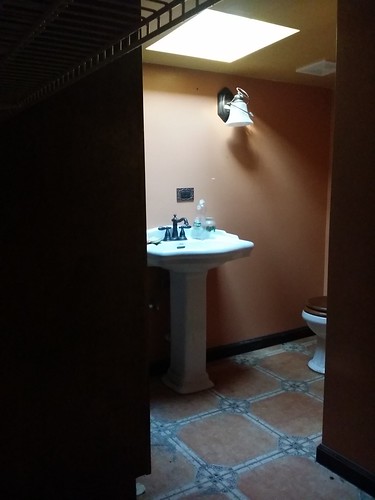 Off that room is the laundry room and half-bath. It was originally two rooms, but when Tim renovated that side of the house, he knocked down the wall between them and opened up the space. The people I bought the house from say there was a shower in what was the half-bath, but as the wall used to be right near the end of the sink, I don’t know where the shower was. Maybe you had to stand in the toilet…? We won’t be putting a shower in, although I always had a dream of adding a claw-footed bathtub on the side of the wall where the shelf is, just past the back door. We’ll let the next owners decide if they want to do that work. 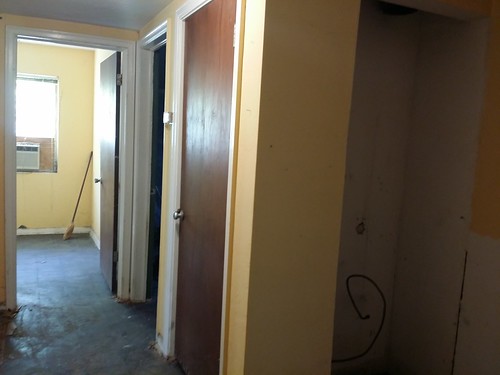 Heading back through the living room, here’s the hallway that leads to the bathroom and bedrooms. That empty space there just to the right is where the old oil heater was. Tim’s going to massively renovate the bathroom including this empty space and the small closet across the hall from it, because we’re getting heat/AC put in and the blower has to go in that hall. He also needs to demolish the ceiling in the hallway so the AC guy can add vents going into all the bedrooms. As I was telling my mom, it really chaps my ass that we’re getting heat and AC put in there after I lived without it for so long (the oil heater and window AC units, and space heaters after Tim moved in and wouldn’t let me use the oil heater any more — sigh… firefighter’s kids!). But you can’t sell a house in Florida without AC (the laws have changed since I bought the house in ’95) so we’re getting it done. It’s a few thousand less than my cut-off “TOO EXPENSIVE! TIME TO PANIC!” price, sooooo…. anyway. 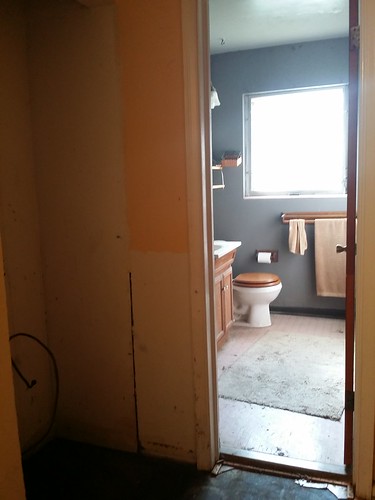 Master bathroom. Again, Tim’s going to gut it, make it about twice the size it is, and the hot water closet (with AC blower) will be in there somewhere. Say goodbye, pink 1950s tile! 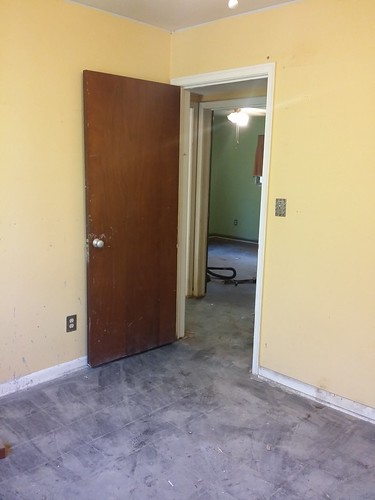 First of three bedrooms (one of the two smaller ones). Has alternately been a guest bedroom, my office, briefly my bedroom during the divorce, a storage room, my office again, a cat room, and my ceramic pouring room. 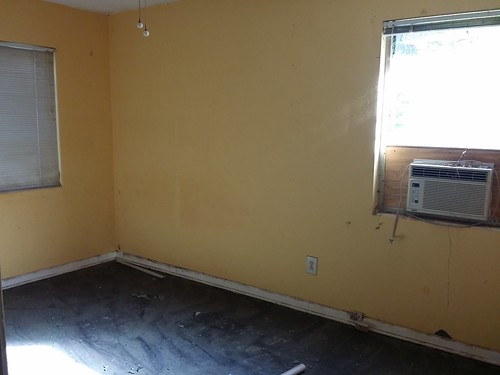 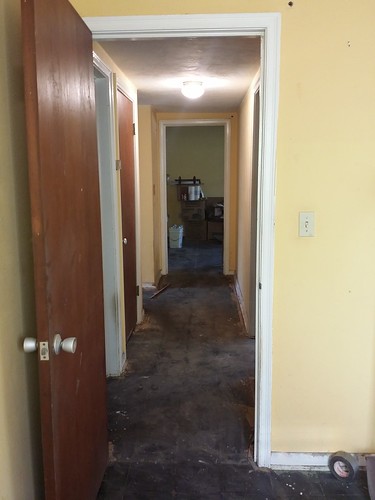 The second of three bedrooms (the other smaller one). Has been my first husband’s office, a shared office for the two of us, a library/reading room, a guest bedroom, a room used as a bonus living room slash office when I rented part of the house out, and my second husband’s office. The second picture is me standing in front of the window with the AC unit in it, looking back down the hallway to the living room. 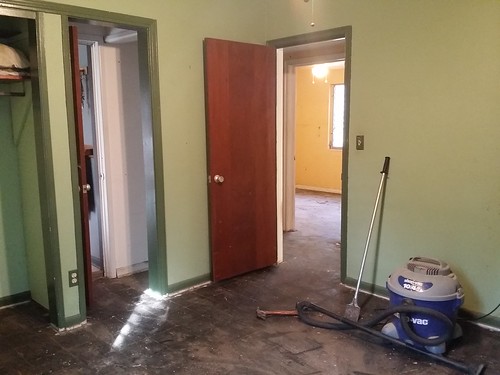 Master bedroom. The people I bought the house from cut the closet in half and put in a door to the bathroom… that might go away again depending on Tim’s bathroom renovations.

Aaaaaaaaaaaaaaaand, that’s all the photos I took when I stopped by there the other day. One day I’ll photograph the yard, and the back porch, but until then…. whew. We have our work cut out for us, prettying this up and putting it out there!