What to do when you work alone but need to bounce ideas off someone? BLOG! 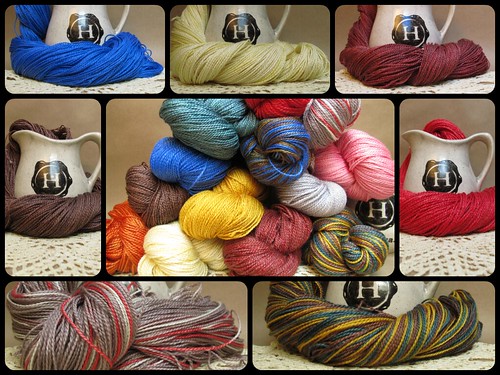 I’ve got too many regular colorways for too many base yarns. But I want more colors. And more base yarns. Oh, the drama of loving color and texture! Right now I have 13 regular base yarns, another four that I use for club-only(ish), and two limited that I won’t be restocking when they’re sold out, and I want to bring in at least one new one next year. Oh, and I have three spinning fiber bases. And I have 22 regular colorways. I want to bring in another two next year. I have … I think, 16 bins of yarn, and they are all full, because I don’t like to be out of anything and do the best I can to keep everything in stock. I have a lot of money in stock. A lot. If this house catches on fire, I might just throw myself into the flames rather than deal with the stock loss.

If I was going to be harsh with myself, I would say that I need to narrow it down to two bases per weight of yarn, one standard and one luxury base. Between sock, sport, DK, and worsted, that would bring me down to eight base yarns — almost half of what I have now. And in thinking of sales and “when was the last time I dyed that, anyway” there are easily five colors I could discontinue. Eight, if I didn’t mind breaking up my “decade” yarns. Which of course I don’t want to do. And I have five or six sock yarn bases that are all pretty good sellers, so it would be hard to get that down to two.

Maybe instead of trying to keep everything in stock, all the time, I should let things sell as they sell and update every three months, instead. Instead of trying to dye yarn once a month (plus any yarn club), stick to my in-place dyeing schedule for yarn club (or new or the occasional limited edition colorway) but then have other base yarns updated once a quarter (buying replacement base yarns when I am placing an order for yarn club yarns). I have a pretty good stock of undyed base yarns right now – close to a bag of everything except a few things my distributor doesn’t have in stock. I can’t see running out of anything that I’m not already close to being out of (but can’t buy more of as it’s not in stock) in the next two months, and I could fold a stock base yarn order into my next club yarn order… and plan on doing that going on (rather than buy yarn for club, and six weeks later, base yarn for restocks, and two months after that, yarn for club, and six weeks after that… you get the idea).

Here’s another thing – I don’t know any other dyers who dye like I do; dyers who have a constant and consistent stock of the same repeatable colorways, dyers who strive to always keep all things “ready to ship”. Being out of stock in some things never seems to bother them or hurt their business. And I don’t think being out of something has ever HURT my business – I am lucky in that I have repeat customers who know how to stalk me, know that custom work can happen faster than regular restocks, and know that I have an option on my website to be notified when something out of stock comes back in stock. So maybe I just need to fucking relax on trying to have EVERYTHING in stock ALL THE TIME, and move towards more of a “you guys are going to be so excited about my next update” model.

Speaking of buying base yarn… it’s starting to feel like kind of a crap shoot these days. I have one company I buy most of my yarn from, another company that I occasionally buy from but they only sell cones (which I don’t like) or double-sized skeins (which don’t sell very well), and a third company that I’ve not bought a whole lot from but they seem to have a good supply of base yarns that are both similar and different from what I have now.

I really like Company A, but it seems I can’t reliably shop there with a plan – many times in the last year I’ve gone to buy specific yarns but they’ve been out of stock. There is a way to get what you want, guaranteed in spaces throughout the year, but it involves buying a minimum of ten kilos at one time of each yarn you want to be guaranteed to get, which I can’t afford. I’m in that weird middle land… I need more than two bags, but less than six.

Company B is ridiculously easy to buy from, but I don’t like winding yarn off of cones, and the double-sized skeins don’t seem to sell well for me.

Company C has some things that are similar to what I’m buying from Company A (which could work as replacement if I can’t get something from A) and also some things that are different that may fill in a hole in my line (for instance, they are where I get my spinning fiber), and they have a yarn that might make a good replacement for the luxury yarn I discuss in Point 1. But they’re not the quickest, shipping-wise, and I’ve heard from other yarn dyers that the company is great to use as long as you’re not on a deadline (which, with yarn club, I am).

Overall: I have too many options for me to keep up with keeping everything in stock all the time. I either need to limit colors, limit base yarns, or come to be OK with not having everything in stock all the time, ready to ship. But I like colors, I like base yarns, and I like being able to just mail stuff off when people want it. But, more and more, the union in that Venn diagram is growing farther and farther apart…. never the three shall meet, so I need to pick which of the two of them is the most important out of the three. I need to at least pick one. A decision I was hoping I’d come to by the time I finished writing this, but, hahahahhaha. Nope.