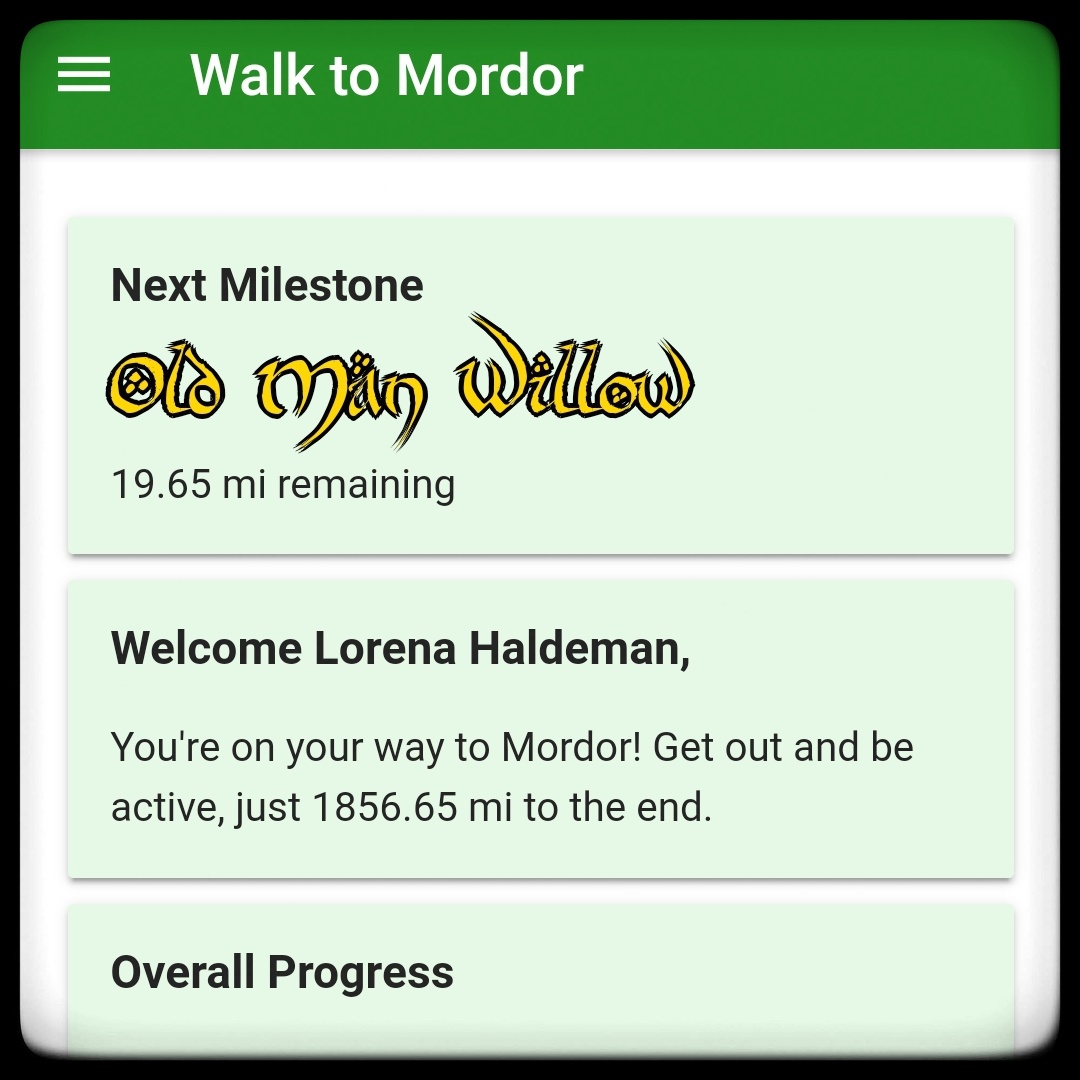 It’s gonna take me a while, though.

(I actually took that screenshot a couple of days ago; I’ve gone another 9 miles since then and am only 10 miles away from Old Man Willow.) Only 1800 miles to go! Yay! Those Hobbits sure were a lot faster than me, though.

It is a fun, nerdy way to stay motivated. Especially when I have friends who are doing it too, and we compare notes on how far we’re getting. Book nerds FTW!

The other day I was letting the dogs out into the back yard and I saw some movement in the tall grass. A flapping noise, and…

… Back Yard Hawk! He may have been going for a mole – Lindy got very excited where he’d been, in the grass, and started digging. She didn’t come up with anything, though, so either Back Yard Hawk had already gotten it and eaten it and was looking for more, or the little digger was lucky enough to evade two predators.

Let’s see… what else is going on?

There was just a massive update to the silly farming game I play (Hay Day). An update the developers had been working on all Spring. They’d been delaying making other updates to the game to focus on this expansion. They’ve been teasing it, hinting at it, giving us little out-of-context videos… and finally this week, they released it. And it is as if a hundred thousand souls cried out at once and were silenced. Did the developers actually…. play the expansion? Before they released it? Because it is… universally terrible. At best, people are saying “well, I really WANT to like it, but…”. The only thing we can think of is that they rushed the release because of the new Harry Potter game that’s sucking everyone (except me) into it and the expansion wasn’t truly ready yet. Ugh.

Speaking of Harry Potter… I understand Rowling has been in the news lately, and not for a good reason, which makes me sad. Not sad for myself, because while I enjoyed the movies, the universe didn’t make as deep as impression on my soul as, say, reading The Lord of the Rings when I was nine, or even The Deeds of Paksennarion when I was 18…. but it makes me really, really sad for all the “kids” (and I use that term loosely to mean anyone 15+ years younger than I am) who grew up on the books and are now having to reconcile the writer turning out to be kind of a garbage human. Sort of like how I felt about Mists of Avalon after discovering what Marion Zimmer Bradley was like in her personal life. I hope my friends for whom the books mean so much are able to separate the art from the artist and not lose their love of the universe they grew up in, even if they lose their love of the artist.

Which also means that artists speaking out about their personal beliefs is really on my mind this week, between that and my beloved Ravelry making the news so much this week. I’m hearing a lot of people say that silence is complicity, and yo, I get that, I really do (“First they came for the…”)…. but sometimes, just maybe, consider… silence is only the pause for breath while you’re searching for the right words. Words that won’t be misinterpreted. Words that won’t sound angry and aggressive but will still make a stand. Words that will say what’s in your heart without attacking anyone and getting their back so quickly up against the wall that they don’t listen to what you say, that anger and knee-jerk reactions make them unable to hear you. Words that are well-thought-out, well-crafted, well-spoken. Words that can’t be taken one way when you mean it another. Words that leave no doubt about who you are and what you believe in, but that also… give shelter to those that feel the same, words that support the downtrodden and marginalized, words that include and protect and shine a light in the darkness. Not words that can be used as weapons against yourself later when taken out of context.

Sometimes silence is just the pause before the soul speaks.