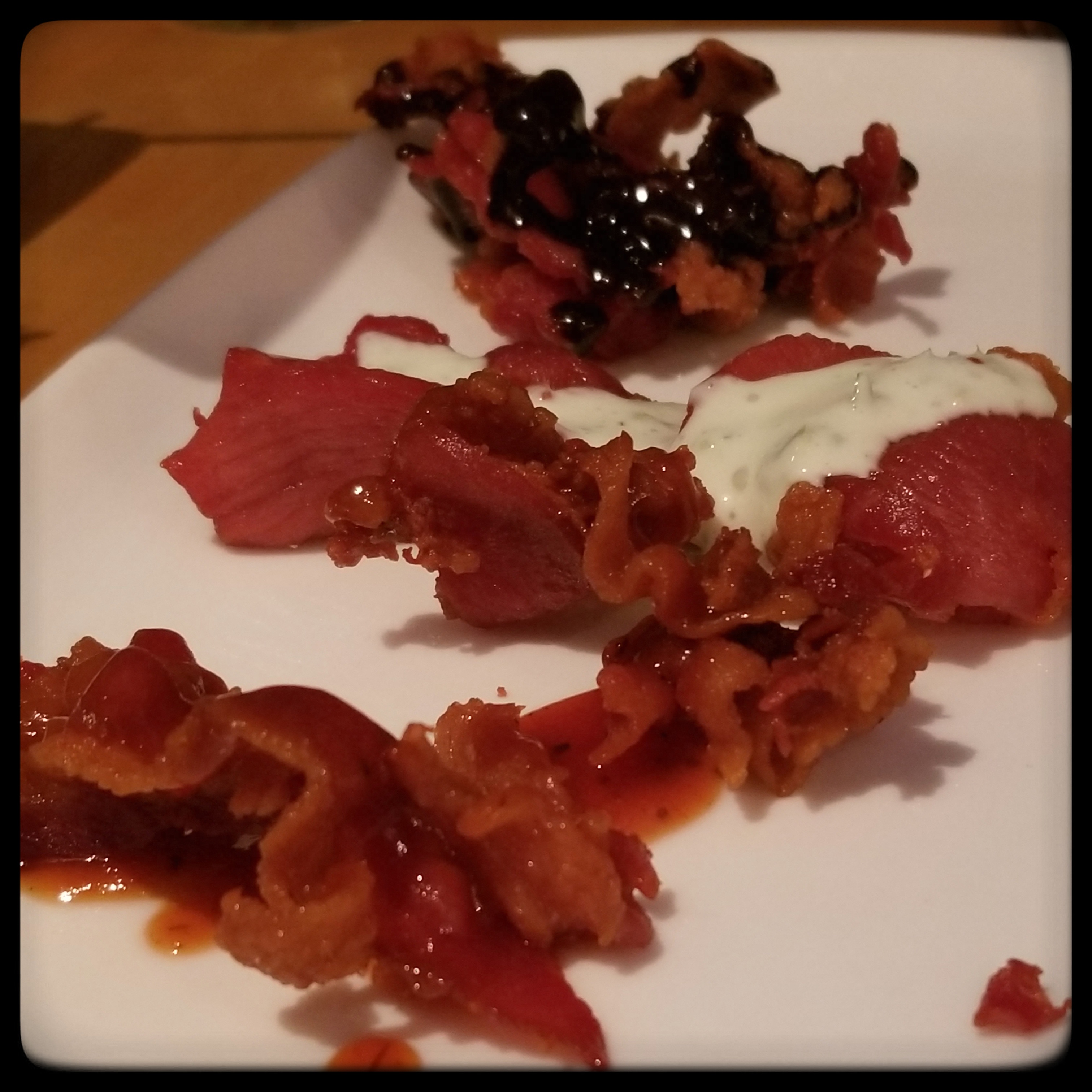 I mean, it was fine bacon. Cooked well, interesting sauces (really dug that hot pepper ranch dressing)… and although yes, it was free, it was not unlimited as we had heard. Clearly. More the opposite, since we had to ask for it, and the waitress seemed a little surprised, and it’s not like this is an impressive display of bacon prowess. Overall, Mojo doesn’t have to worry about losing my business. For one thing, we both thought about leaving before our initial drink order was taken, because it took so long to get our initial drink order. Not get… order. It was probably 15 minutes before we were asked if we could be brought anything. “No, no, we’re just sitting here at a table in the back with no menus because we wanted to come inside and get a good view of all the OTHER people eating and drinking. YES WE’D LIKE TO PLACE AN ORDER FFS.”

The drinks were fine, if unremarkable, once they came out. After the food was already brought to our table. The charcuterie board was pretty good, and they had lots of things on the menu that looked interesting. The whiskey on tap thing is apparently a … club? Or you buy a card for it? Or something? There was a little write-up on the menu but none of the servers we had (we had three, at different times, although two were a team as one was being trained… and she was already better at it than her trainer) explained anything to us about the tap options and/or club or card or whatever.

In other words… yeah. Mojo BBQ doesn’t have anything to worry about, it won’t be losing any of my business to Original American Kitchen. I can forgive really shitty service if it’s a place I’ve been to a lot, because hey, everyone has their off days and we’re all human and don’t judge a place by one experience. However. If that’s my first experience? It’s going to take someone else really wanting to go there and me wanting to hang out with that person to get me back.

On the other hand, on the walk back to the car, I saw a mushroom cluster growing out of a tree that was so huge and amazeballs I had to squat down and get a picture of it, to the great amusement of people eating dinner in that windowed side of Harry’s. BUT COME ON. Just look at this!

I know it’s hard to judge for scale but it starts near the base of the tree and came up almost to my knees. What a thing of beauty! Totally worth getting giggled at by people to take this picture.