This One Hit Wonder in Carolyn is already on her w

I can't wait to see how this looks post-firing. I

Justice is not nearly as thrilled to be weighed as 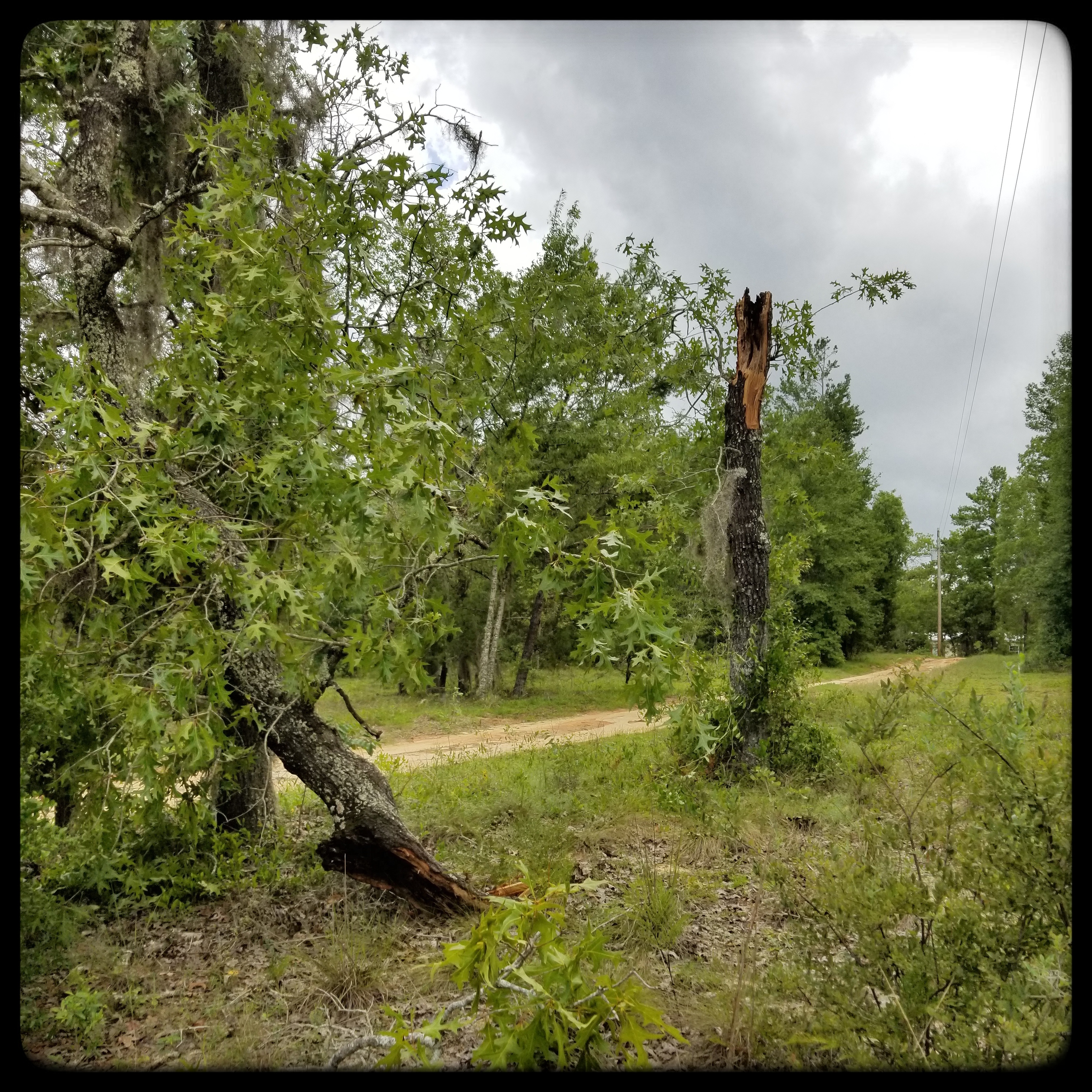 I was in our driveway yesterday, heading to the post office, when something caught my eye. Something just didn’t look right…. You know how you see something all the time and somehow some time it just looks different and you can’t put your finger on it….? It took me a minute….

The top two thirds of the tree on the right broke off and blew into the tree on the left. I tried to get a good picture of what’s going on there, from the other side, but you can’t really see what with all the leaves, because both trees were alive. But now on the left, there, we have a tree… and then we have the top 20 or so feet of another tree leaning right up against it.

So glad it went that way, and not the other way, because that would have taken out those power lines you see there. You can’t really tell in the photo but it blew about twice as far into the other tree as the distance between it and the power lines, so… hey, thank you, Lady Luck! Must have happened in that big storm that blew through crazily on Wednesday – the one that made me wonder if I’d missed a Tropical Storm warning.

We also had a big storm yesterday, which blew in while I was driving back from the post office. My kingdom for an awning over my front door so I don’t have to get soaked trying to unlock it and get inside! I spent about ten minutes sitting in my car waiting for it to blow over, since it had come in so fast… I thought maybe it would leave fast, too. Hahaha. Not so much. I got soaked.

Yeah. So. How’s the weather where you are? Weather and technology… about the only two things I talk about these days. Or this week, anyway.

OK; early wrapup for me this morning. Jenn and I are going out to see our friend Bill again today (did I tell you my idea to bring Lindy, my three-legged dog, to the rehab center with me some time to visit him? They allow dogs, and I think if anything would make anyone in a rehab center smile, it would be a three-legged dog that’s so stinkin’ happy to be alive it’s almost embarrassing… although they did warn me at the desk that it may take me a while to get back to Bill’s room with her because a lot of the patients there love dogs and don’t get to see them often. That’s a price I’ll pay.) (btw, you know I mean rehab like nursing home/care center, right? Not rehab like drying out. He’s recovering from a stroke.). Today is not the day to bring the dog, though, because afterwards Jenn and I are going to go check out this restaurant I’ve heard about that (a) has whiskey on tap and (b) on Fridays brings unlimited bacon to your table, like peanuts or chips and salsa in other places. Whiskey and bacon? I may not come home!