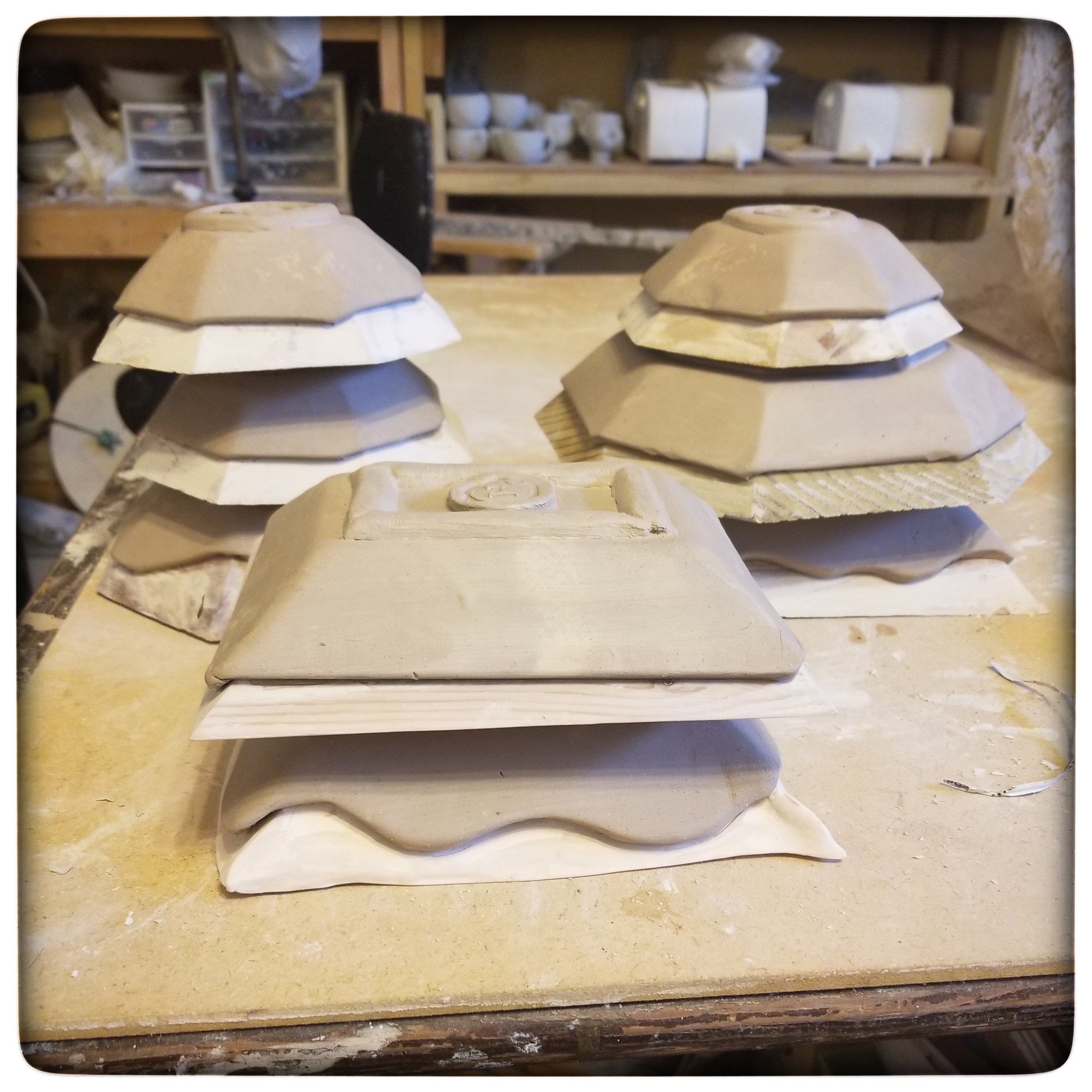 I started this post on … I don’t know… Monday? And keep getting sidetracked. Clay and texture is in the other room, whispering to me.

It’s pretty tough to take a picture of your phone, so instead of showing off my new battery case (looks just like a regular case, only a little thicker, and has an extra battery in it), here’s a picture of some tings I did in the studio yesterday, drying. Dry faster! I want to fire you and glaze you!

Anyway, I think the battery case is the perfect answer for craft show weekends. Since I have to hand my phone to everyone who pays with a credit card, for their signature, I didn’t want something either attached to a bunch of cords or something I’d have to constantly unplug and plug back in. This is just a little heavier than the phone itself, and just as compact, so it’s the perfect answer.

I also looked and they make one for That Poor Man’s ancient phone… so if he doesn’t want a new phone, maybe I can at least get him a battery case.

What’s better than a box? A box, next to another box, INSIDE A THIRD BOX. He does not care that he barely fits… he still sits. He may look a little grumpy about it… if I was a GOOD cat mom, I’d make this more comfortable for him. But he’ll tolerate it.

Oh – in other tech news, pCloud seems to be the answer for my file-sharing issues. Suck it, Dropbox! Now I patiently await the day a few years from now when pCloud makes so many changes that I decide to look for something else. Sigh. Isn’t that the way? Change is the only constant.

I’ve been through… four blog hosts, I think, since I started Snarkland. I keep trying small companies that do just what I want (small personal blog hosting) and stay with them through some growth and changes, until they are touting being the answer for “the big guys” so much that they either no longer do what I wanted (simple personal blog hosting) or they make it so complicated that I just nope out. I lost a lot of blog posts because of things like that, in 2007 and again in… maybe 2011? The last time I moved, I went to Laughing Squid blog hosting, though, and so far, still perfect.

And now I’m on my … second? third? email client for HaldeCraft. All the business gurus tell you that email is the way to go – that emailing newsletters is where it’s at, those are your people… and that’s fine, until your email client breaks up with your shop host, and then you have to struggle to find another email client. Sigh. But I switched from Mailchimp, when they broke up with Shopify a few months ago, to a group called Seguno, and I gotta tell you… I like it a lot better. It’s even run through the back end of my website, so the UI is the same as my shop. Heckin’ easy to use.

OK; I just wanted to catch y’all up on the tech rambling. Now I can’t resist the siren call of making some ceramics, so I am outta here!