So, Tuesday night, about the time Tim and I were watching our last TV show of the evening, I was like, “Holy wow, what is that NOISE???”…. we paused the TV and listened to the longest rumble of thunder I’ve ever heard. It must have gone on straight for about a minute. That was at about… I don’t know, 9:45 or so? I looked at the weather app on my phone and saw a large band of red, followed by thick green and yellow, was headed our way… it looked like it was sweeping across the northern half of the state.

Then about half an hour later, I’d just settled into bed to read a few pages before going to sleep (Babylon’s Ashes, the latest book in the Expanse series by James S.A. Corey). I was maybe three pages in when it started to rain, and the wind and rain were hitting the side of the house pretty hard – harder on the west side of the house than the east. There was a little bit of thunder, not much … when the power just… poof. Gone. Not even during a lighting/thunder combo, just… gone. Out. Well, it was 10:30 anyway, and while Cetty and I did a little texting back and forth of the “we’re ok are you ok/did you call Clay Electric yet”, mostly I was tired already so I thought I’d just go to sleep and the power would be back on in the morning.

The power was NOT in fact back up in the morning. Tim texted me from the bottom of our road, that a power line was down but a crew was coming in, so it shouldn’t be too long without power. One hour. Cetty brought me some coffee since they were running their RV off their generator. Two hours. Joe took Cetty to Physical Therapy (she got a knee replacement back in November, if I haven’t mentioned that) and when he came back, he asked if I’d seen the damage.

It looks like a tornado started over at the lake, plowed through some houses, jumped over 100, and came right up our road. It’s a mess. It’ll be at least day before it’s fixed, probably; they’re not even working on our road yet. 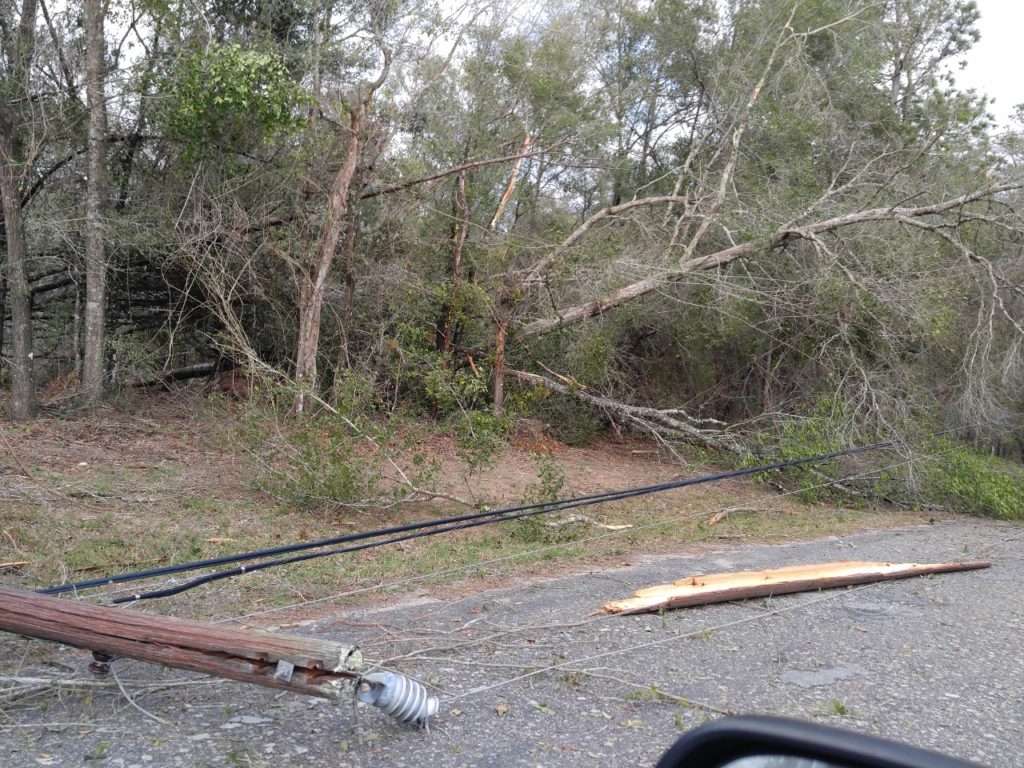 A crew had come down our road, sure; to turn anything off that wasn’t already off, for safety. But there were places out on 100 that were worse off, and supplying electricity (er, or not) to more houses than ours, so they got help first.

I drove down 100 to survey the damage, and… whoa. 60, 80-foot pine trees twisted and snapped like pencils. Trees through a house. Trees close to houses. Piles of trees in driveways and yards. Back on our road, a house maybe five down from us with part of their roof missing. A tumble of trees dropped like pickup sticks in the driveway of the house for sale right next to them. And of course, no power.

If I’d known that’s what I was sleeping through that night I would have been a lot more stressed out!

So Joe got our fridge hooked up to his generator, so we wouldn’t lose any food. The power feed wasn’t right to hook up the pump, so we didn’t have any running water, but I’d been dyeing yarn the day before and hadn’t dumped out the pots yet so was able to refill toilets from that, and we always have a lot of bottled water. The circuit the fridge was on also had an outlet, so I was able to use my coffee pot, and charge my phone.

Mostly I sat around on Wednesday and read. About mid-day, I thought, hey, why not work on a project I’ve been putting off for like, I don’t know how many years….? As an only child, I am the recipient of all the family photos. I started off with my own photos, added photos I’d snagged from relatives growing up (my family was very into multiple copies of photos), and when my grandmother died in the early 90s I inherited most of her photos. I’d gotten boxes and labeled them by decade (everything pre 1950 has just one mixed box) and started sorting things out. Then when my father died and I got his photos, I just never got around to sorting.

Guess what I’ve been doing the last two days?! I’ve sorted through five plastic bins, and five out of six cardboard boxes. I just have one cardboard box to go through, but it looks like a doozy – many decades all mixed in together… so it’ll take some sorting time. But I feel like a weight has lifted off me, having finally gotten most of it done!

Wednesday night was spent, after going out to eat, sitting and reading by candle and lamplight. Thursday was spent much like Wednesday, although with more guilt for not getting work done. I’d wanted to fire the kiln Wednesday, and I had been in the middle of dyeing yarn. And I had some social media things to upload… and a blog post or two to write… etc, etc, etc. None of which I could do without electricity. So, photo sorting and staring off into space it was, then!

Yesterday late afternoon we finally broke, and asked our friends across town if we could come shower at their house, because we were starting to feel pretty gross. Cetty and Joe were running low on their reserve tank of water, too, so when we went to Denise and Tarrant’s, we filled up two big trash cans with water – one for Cetty and Joe’s reserve tank and one to refill our toilets.

But those folks at Clay Electric were still at it, and by the time we got home (all clean, hooray, I can’t TELL you what my hair felt like after two days!) we had electricity again.

So today will be spent in a flurry of “what the heck was I working on?!”. I’ve already started the kiln, and I’m about ready to go fill the dye pots so they can start warming up while I take a shower and eat breakfast. Then I have soooooooooooo very much to catch up on. 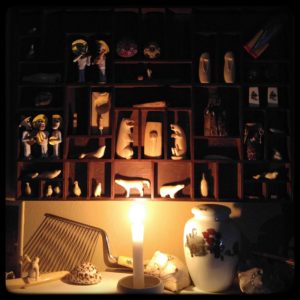