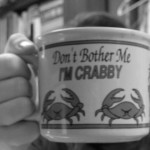 I’m cranky and haven’t slept well the last couple of nights, so feel free to not even read this Ranty McRantyPants post.

We walk the dog at least six times a day, but Tim usually does the first walk without me (I do the next four or five by myself, then we walk them together on the last one). So let’s say I walk them five times a day, and the walks are 10-15 minutes each. That’s about an hour and a quarter spent walking the dogs.

Since I haven’t had much new products lately, and sales have been down, I’m spending at least two hours a day writing blog posts, making graphics for future blog posts, posting on social media, and answering emails and comments on my posts. This is all so I can keep HaldeCraft in people’s views, keep them seeing my name, so that when I do have restocks and new items, they remember me. Honestly that’s more like three hours a day.

I also spend about an hour a day reworking old listings; changing the copy, writing new things, or even taking new photos.

So far we’re up to… almost eight hours.

Let’s put another hour and a half in there for making, eating, and cleaning up after breakfast, lunch, and dinner. Breakfast is usually at my desk while I’m answering email, lunch is usually pretty quick, but dinners are more leisurely. Well, I don’t know about LEISURELY, but slower than the other two meals.

I like to sleep. I haven’t been sleeping very well lately, but according to my FitBit I’ve averaged about seven hours of sleep a night for the last month (some days more, some days less).

I also like to read. I try to read for about an hour before I go to bed. Sometimes more if the book grabs me, sometimes less if I’m exhausted, but about an hour.

How much time would you say you spend in the bathroom every day? Let’s say about an hour and a quarter, and I’m counting time in the bath or shower as most of that.

I also need to work; like I said, sales the last couple months have not been the best. Now that I’m out of the cast, I need to start making things and restocking and getting new things out there, because how shitty am I going to feel if I have to go out and get some kind of office job RIGHT after buying property with an art studio for my business? Pretty darn shitty, I can tell you. It’s hard for me to put an exact time on it because at least twice a day I have to walk from the studio back to the house to do something on the computer (that’ll fade once my office is set up over there) but I’d say over the last two weeks I’ve been trying to average four to five hours of work, at least. Sometimes that’s unpacking and organizing, but sometimes it’s actually making things.

That’s also not counting watching about an hour of TV at night (during which I do some of those PT exercises), any household chores like laundry and cat box cleaning, going to the grocery store or post office or getting gas for the car, and it’s also not counting the two days a week I drive into Gainesville for physical therapy. PT goes for about an hour, and they usually see me pretty much at my start time; that means I like to get there early to be safe, and it’s about a 45 minute drive from our house to the parking lot. If I’m driving into Gainesville I’m also going to try to run Gainesville errands – running out to Butler Plaza or dropping off yarn club or swinging by the old house and picking something up that we haven’t moved yet. So, an hour at PT. 90 minutes for the drive (counting both ways). I usually add at least another hour onto that with errands. So those two days a week, I have to not do 3 1/2 hours worth of something. That something is usually divided between work and my daily physical therapy exercises. I’m down to getting x-rays about once every three weeks now, so that is about an hour less that I have to worry about on PT days (it’s usually 55 minutes of waiting, and five minutes of an x-ray and a “you’re looking great!”) And they just told me at the office that if I have anything else vaguely medical that day (a dentist appointment, a chiropractic appointment) Blue Cross has been known to deny payment to one of those things. I guess they don’t like it when you bundle all your medical into one day? So now I can’t schedule any chiropractic visits on the same day that I have hand therapy, which means that some weeks there are THREE days a week I need about 3 hours to go into Gainesville and get some things done. Or I just don’t go to the chiropractor. Or I don’t go to physical therapy one time that week.

I’m starting to feel like I’m falling behind. I’m not doing PT exercises six times a day. I can’t, there’s just not the time. I’m only doing one contrast bath per day. I’m not getting as much work done as I want, and I have unanswered email and messages, and some of my listings I look at and think “well no wonder nobody’s bought this, the photos are crappy and the copy is dull” and yet I don’t have or make the time to do anything about it. I’m convinced I’m a hack artist and nobody will ever buy my things again (I’m sure this will pass in a few days, almost every single artist/writer I’ve ever met has felt this way at some point).  I’m waking up at 2 AM wondering what I’m going to wear to my interview for an office job (or going over the nightmare scenario of not having a caterer for Aunt Gay and Uncle Joe’s wedding reception – I’m also convinced that there will be no food there and I’ll have 75 angry, hungry guests).

Now, if you’ll excuse me, I have to go pre-write a blog post for my work blog for tomorrow, as I have PT in Gainesville in the morning and them am going to do something wild and crazy like meet my husband for lunch (after which I’ll run a bunch of errands, then come home and walk the dogs, not leaving me time to write a Friday Five post for work).