Halloo, all! I’m in town today at the old house, stealing some Internet… wait, is it really stealing if I’m the one paying for it? Stealing some time for the Internet, how about that…?

ANYWAY, I just wanted to pass on a couple of studio photos, to give you an update of how everything is shaking out after the bulk of the move (yes, just “the bulk”… we’re still not completely finished… it’s a long story and comes with a two-drink minimum). 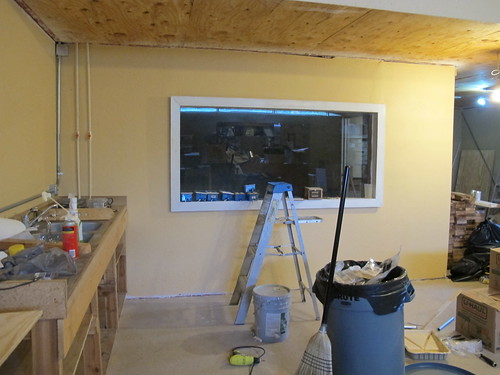 I forget if I mentioned, but when we took down the boards they’d left on the two walls (so my shelves could sit flush), they hadn’t painted underneath… and the previous color of paint was a red worthy of a basement room in the Amityville Horror house. So that meant repainting! Yay! Just what I wanted to do! Hahahahaha. 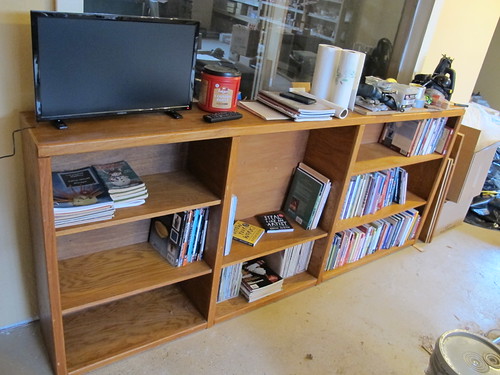 That section of wall with the office window on it has now been repainted, and a bookshelf put in front of it (on the studio side… we haven’t even started working on the office side yet). Once I was able to unpack some of my books I started to feel so much more at home! This will house all my knitting and my ceramic reference books and magazines. The TV has already been moved -we tried getting a wireless thingy (official term) but it won’t reach as far away from the house as the studio is, so… no TV in there for me after all… unless I get a cheap DVD player and watch all my DVDs of Homicide: Life on the Street and Farscape and Twin Peaks. Which I could watch and rewatch, so, that’s tempting! 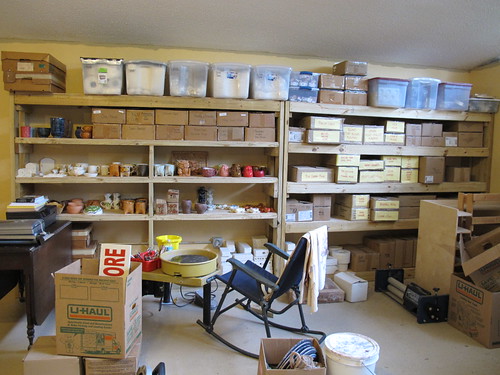 Eventually these shelves will house molds (most of which are still at the old house) and greenware, and another one that has yet to be built to the left will hold bisque. Right now, though, so I can get everything unpacked, it’s a catch-all for molds and finished ceramics (and some bisque). That Poor Man left enough room at the top for me to put big but light things (like yarn blanks, etc.). 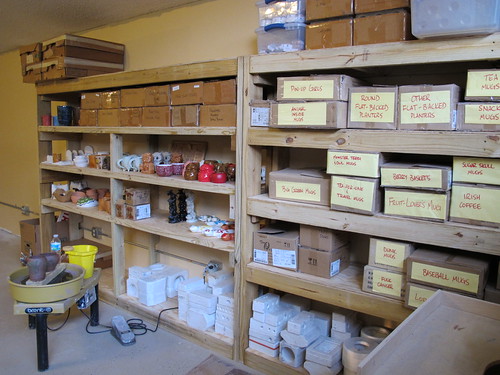 Here’s another shot of that same wall, and you can see where the next set of shelves will go. 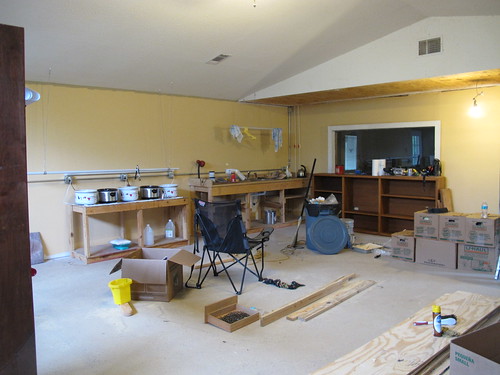 Here’s the dye bar setup; the sink is where it’s going to be (and the water from that will eventually run into a small pond/waterfall we’re going to install, that will filter and clean the water) and eventually I’ll have a longer table in there for the dye pots. That table will run from the sink to the door – I just realized the door is out of sight in this photo, but it’s just out of the frame to the left.

A friend last night said that it looked like everything was coming along great – I just sort of raised an eyebrow and was like, “if you say so!”. It doesn’t feel, to me, that things are moving quickly. Maybe because I’m in it all the time? But my friend swears that seeing photos as I progress makes it look like things are moving well and fast.

And that’s it for right now. Did you see yesterday’s newsletter? Don’t forget to check it out if you want a 15% off discount code!