If you read this post, about a month ago, you know that the water was an issue/non-issue (in that it wasn’t on the first time we had the place inspected, so he didn’t inspect the water, and then the first appraisal was deemed “materially insufficient” because the water wasn’t tested, so they sent out another inspector, who deemed it fine, and everything was hunky dory). HAHAHAHAHAHA sob.

So, let’s see…. obviously we had to get the electricity turned on, and we thought they would fix a leaning guy (guide?) wire (no such luck, turns out that is our responsibility). They turned the electric on (or, over to our name, as it was already on)… uh… Monday, the 23rd, I think. We went out that night (or was it Tuesday? Everything is blending together now) and turned everything on. I was especially excited to see how the new AC unit worked. And it seemed… loud. Like, really loud. Like, we won’t be able to hear the TV when that thing is running. And while I’m walking around trying to figure out why that sound would be coming from near the closet with the hot water heater (maybe there’s some sort of air exchange thing happening?), Tim is walking around trying out all the faucets and bemoaning the fact that the water pressure is terrible.

It may be obvious to you, reading this, what was happening, but it took us about ten or fifteen minutes to figure it out.

When Tim decided to walk outside to see if there was a vent or something, having issues, he discovered water pouring out from underneath the house.

It was getting late, so we decided the best thing we could do was turn off the water at the pump, turn off the electricity at the main breaker, and come back tomorrow. We didn’t even have a flashlight with us, so it wouldn’t have done any good for Tim to crawl around under the house in the dark. Tomorrow, then!

So the next day, Tim crawled under the house and tore down the insulation that was now super-gross and wet from yesterday’s excitement. Under that he found some gray pipe that had been chewed through; a simple enough fix, although he didn’t have any repair things with him (not knowing what the problem was until you see it, well, that makes it hard to buy fix-it stuff in advance). Here’s a (much-later-taken) photo of The Plan. The Plan was to cut out the chewed section of the gray hose, and replace it with – since they don’t make the gray hose stuff any more – the white PEX you see here. PEX, clampy things, cutting, crimping, voila. Magic. HAHAHAHA sob. 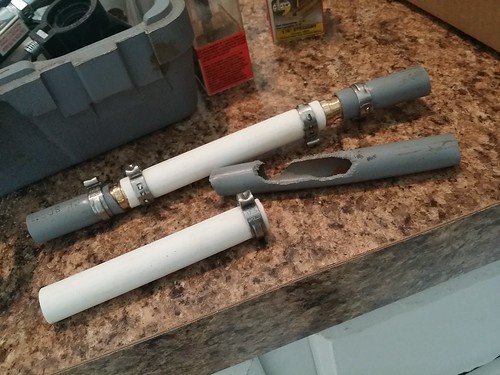 The next day, Tim went out by himself and I stayed home. What day was this? Wednesday, maybe? Did I tell you how this is all blurring together? If it weren’t for automagic dates on pictures, I’d be done for. There was one day Tim went out by himself, thinking he’d fix it. He cut out the chewed section of gray, replaced with white, clamped, crimped, whatnot. Lovely. Then he went to turn the water on again. Water pressure? Better, in the house. But there’s still a noise. Not as bad a noise, mind you, but… still. So he goes back under the house. While this first thing he fixed was between the hot water heater and the first bathroom, there was another leak… under the second bathroom. He didn’t have enough stuff to fix the second leak, and also now he was covered in water and sand and sandy mud and now couldn’t even take a shower in the new house because leak.

The next day, which I think is also the day we brought out the hutches (because we always have to bring something! That’s the rule!), he crawled under and repeated the actions of the previous day, and fixed the second leak. Huzzah! He turned the water on and the angels sang! Or more like he turned the water on and the angels giggled, because when he crawled under to check… do you see, in that picture above, the gold connector things between the gray and the white? Those were both leaking. On both fixes.

Turns out that the gray – wait, Tim told me… polybutylene – and PEX aren’t 100% compatible. Things that Tim has learned in the last four days include:
– these things are not compatible.
– that you can buy a $6 kit that will make them compatible.
– that he might need to buy a $60 uni-tasker tool (on top of the $40 uni-tasker he already bought) to make that work.
– that for about the same $60, he could buy enough PEX to re-do all of the pipes under the entire house.

He didn’t work on this on Saturday, because Saturday we brought Aunt Gay and Uncle Joe and Barbara out to see the place – finally! And Sunday we had Chris and Sharon and Dan and Jenn out, for drinkies and snacks, which was absolutely wonderful. Monday… what happened Monday? Oh! Monday, my mom and Dave came up in the morning, and spent the afternoon at the property, and a little while after they left, Tim’s Aunt Cetty and Uncle Joe got into town, and they came out to see the place (with their adorable dog, Max).

So.. what the fuck is today? OK, so, yesterday, Tuesday, the plan was for Tim to fix the pipes (because he’s got a fix now, so he wants me to make sure to mention that you don’t have to comment here with fixes — he’s good now! He swears!). BUT, instead, he and Joe drove around the property with a chainsaw, like a couple of twelve-year-olds, cutting down limbs and entire trees that would interfere with Joe getting the RV in here Friday. They’re staying at a campground up the road for a few days, because — and this is another long story — we thought we’d need to get the driveway re-graveled before they could get in. The concrete guy stood us up, though, so we just cut down a couple of young trees near the driveway, and Joe’s going to balance on the grass and the better half of the driveway. We also took out one tree that he might hit if he swings wide with the RV, and right after that, HAHAHAHAHAHAH sob, the chainsaw slipped its chain. So Tim’s got to fix that before Friday, so he can get a couple more limbs down.

Today! Wednesday! It is Wednesday, right? Today we are going out there to fix the plumbing, FOR REALS. I will flush that toilet. And then I will flush it a few more times, BECAUSE I CAN. Tomorrow, Lowes is delivering our deck. Well, the materials for the deck… Tim will have to put it together, like a jigsaw puzzle. Friday Joe and Cetty will come out in the RV and set up. Saturday we are going to buy a stove and a fridge, and bring those out there. Sunday… I can’t plan that far in advance. But at least I will have working toilets. I hope.