One thing I was ecstatic to see the first time we went out to look at the property was that there were gopher tortoise holes. I’ve been a fan of gopher tortoises since I lived on the farm; we had them out there. I just love the slow, steady, “ah-yup” feel to them. They are terrestrial (land-living, as opposed to water-living) tortoises whose ancestors go back more than 60 million years. I feel like a babe in the woods compared to them, and love them for a lot of the same reasons I love alligators. Well, I love alligators from a safe distance.

So like I said, I was glad to see burrows; gopher tortoises are unique in that they build large burrows which go down for anywhere from 6 to 10 feet below the surface and while usually the runs are about 15 feet long they can go as long as 40+. You can tell if the burrow is a tortoise one because the entrance will be shaped, well, like a tortoise. Some people call them bread-shaped. 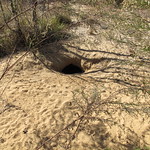 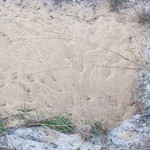 I was also glad to see that some of these looked like shared burrows, in that there was more than one kind of animal track at the head. Gopher tortoises are what’s called a “keystone species“. That means that they’re a species that while they take up little space and resources, they’re so important to the ecosystem of their location that without them, the ecosystem might change or even cease to exist. They share their burrows with up to 350 different species of animals (not all at once). This can include rabbits, burrowing owls, and foxes – and we have seen both fox prints and scat out at the property, which just makes me squee with delight.

They’re also a Threatened Species. That means that there are all sorts of permits that must be obtained before doing construction work, and if you plan to relocate them, there are permits for that, too. We don’t plan to relocate ours — in fact, we’ve reigned in some dog fence plans we had just to give the tortoises more room! I think I read that one male tortoise can have up to 10 burrows over about 7 acres, and a female, up to about 5 over 3 or 4 acres. They are solitary and tend to live one to a burrow, for all that they’ll sometimes move from burrow to burrow and also share with other mammals and reptiles. I guess they just don’t like each other, heh.

Speaking of liking each other, their breeding season is March through October, and they only lay one clutch of eggs (about six eggs on average). I’ve read that predation is high on those eggs, so you can bet when our little babies start to hatch, I’ll be guarding them like they were my own! Plus, any survivors won’t be sexually mature for anywhere between nine and 25 years… so, population is slooooow growing.

They eat wiregrass and prickly pear cactus, of which we have a lot on the property. They also eat blackberries (they’ll have to share with me) and beauty berry (we have some of that growing here at the house, but I haven’t seen any out on the property). We plan to research what else they eat, and try make sure that we don’t fence off access to their food (when putting in the dog fence), to promote a tortoise-friendly atmosphere. If we have to, we’ll transplant some plants to outside the dog run and closer to the burrows… in a “you’re threatened, let me help you” kind of way, not in a “Cowslip’s warren from Watership Down” kind of way. Plus, of course, they will deposit seeds of their natural diet in their scat as they move about their range so over time they’ll be just fine.

I do hear they are good eats, which is why I’ve been getting worried that we haven’t actually laid eyes on one yet, and that the active burrows we saw when we starting looking at the property aren’t active any more. I was worried they’d been scared off by all the activity around the house, or worse, hunted by something and eaten.

And then earlier this week when we went out there, we saw this – 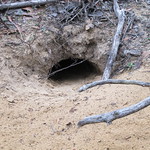 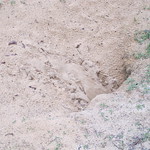 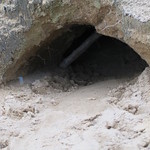 New active burrows! So many that we lost count! We were walking the property line, trying to get the lay of the land, and walked through an area we haven’t really gone through yet… and counted at least seven active burrows. I tried to stay a respectful distance away and use the zoom on my camera to take pictures, but we did get close to a few, wanting to make sure we could count them as active. We want to document their stability and health as they are a Threatened species… and of course I want photos of them, but we also don’t want to let them get too familiar with humans or desensitized to us. We want to be good neighbors.