Did I tell you I took off from work not one but TWO weekends? I KNOW. Who am I?! OK, so one of those weekends was the Florida Fiber-In, and it was work related, BUT STILL. 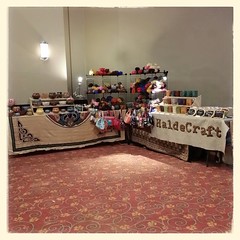 Rhea and I went to the Florida Fiber-In, which of course was a ton of fun. And so! much! busier! than last year! We were on our toes the whole time, which didn’t leave a whole lot of room for being social, which makes me glad that our table is over by the spinning circle because it means that when we did get a minute to sit down, people were right there and ready to chat. In spite of the dead car battery at the end of the weekend, we had a really good time (and didn’t have nearly the nightmare experience with the hotel that some of our friends did). 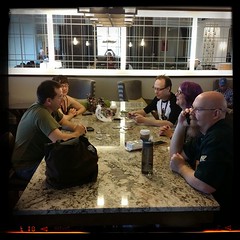 Two weeks after that we went to NecronomiCon, where we hung out with friends we hadn’t seen in more years than I care to say out loud, and I made a right idiot out of myself in front of someone whose blog I’ve been reading for years — OK, maybe I didn’t COMPLETELY embarrass myself, I think I used at least one word more than two syllables long, but I did have a bit of a fan-girl moment in front of him and his lovely fiance (who looks SO familiar to me, and she says she’s been going to Necro since the 90s, so maybe I’ve seen her there before). FUNNY STORY: I noticed her before I noticed him, and it was while we were all checking into the con. The whole time I’m telling the check-in guy my last name and getting my tag, and he’s going on and on about how I’m science fiction royalty (as he knows my father‘s and my uncle‘s books) I’m trying to listen in to see if they really were the couple I thought they were. Fame is relative. Which is going to make this next sentence fucking hilarious: we’re going to Necro for sure again next year because Uncle Joe is the Guest of Honor. I say again: fame is relative.

I also say again: It was so wonderful to see CarolAndEric after so many years of not going to Necro. Us, not them; they go every year. It felt completely natural to look up across the table and see them, as if we had just seen them last week. 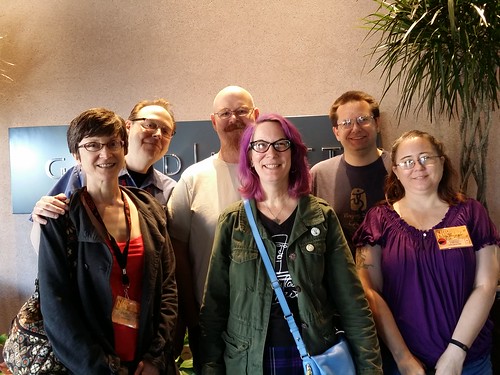 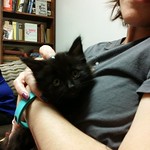 I’ve also still been going to knit night, craft night, Wayward Stitches, whatever you want to call it, on Thursday nights. Lately it’s been knitting-and-kitten night, because the girlfriend of the guy who owns the store has been fostering four baby kittens. OH THE CUTE. Tim is lucky I don’t want another set of cats right now. 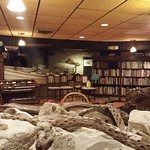 It was also my birthday last week, which means it was also Aunt Gay’s birthday, and for the first time in a while we spent it together. As an aside: I was thinking we hadn’t spent it together since they started teaching at MIT in the 80s, but that’s because I’d blocked out spending my 40th birthday with her, when Uncle Joe was in the hospital. So it hasn’t been that long, but this year was decidedly better. 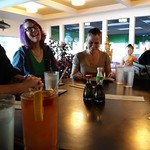 We wound up doing two birthday dinners rather than a party somewhere with a large group. Friday night we went to The Yearling restaurant, and I can’t believe I’d never been there! What an amazing slice of Floridana. Then Saturday we went to Chopstix with more people, and I love that Aunt Gay was able to catch up with Sharon and Jenn, who are both sort of my adopted heart-sisters. I love that they both call her Aunt Gay.

ANYWAY. Lots of social time lately, with people I love, and I am reminded of how insanely lucky I am to have had these amazing people walk in through the doors in my heart and that they share their lives with me. Life is good.