I’m always on the lookout for things I want to do that combine/add to/compliment things I’m already doing. Sometimes those are things that work, like making soap dishes when I already make soap. Sometimes they are ideas that don’t pan out, like making gift sets of soap/lotion/lip balms in complimentary flavors and fragrances. Sometimes they are ideas for swag for my yarn club, like a round tape measure with my logo on it, that will fit inside a travel tool kit. For a long, long time I’ve had in the back of my head the idea of stitch markers, since I also dye yarn.

There have been a couple of times when I’ve done stitch markers as swag in yarn clubs. I think maybe only twice, because I don’t like to do the same thing all the time; maybe once at Hanks and once since taking it over for HaldeCraft. Both times I’ve had them made – who has time to make those yourself, right? When you already make ALL THE THINGS? 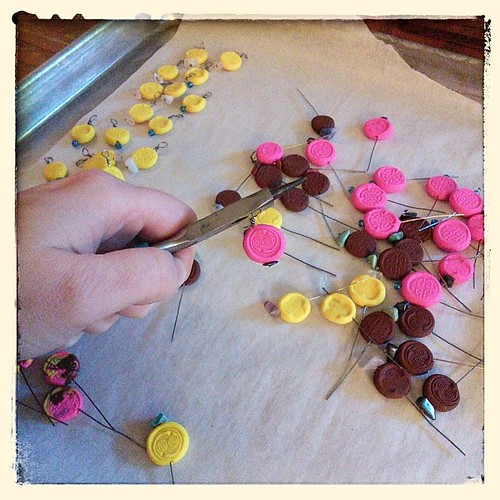 Yes; this is me, teaching myself how to make polymer clay stitch markers last week.

This first batch is mighty wonky; while I did make really basic beaded jewelry one summer while working at a Renaissance Festival, not only was it about a million years ago (OK, 24 or 25) but it was really just stringing beads my boss bought on wire long enough to make a bracelet – absolutely nothing to write home about. So this was my first time doing any sort of wire wrapping and while I found it easy to do  (physically) I can tell there’s going to be a learning curve as far as getting them uniform and pretty. I already had a lot of respect for a couple of my friends who make professional-quality, stunning jewelry, but whoa, last week made me mentally tip my hat to them again.

I guess where I’m going with this is that this first batch won’t wind up being for sale (I may give some away as thank-you’s in large yarn orders, although how “thankful” the customer might be is sort of up in the air), and I can tell you right now that future yarn club members are going to be test subjects for my new obsession.

And this also may play out into a new way to do buttons that I might be a lot happier with… so stay tuned on that as well!