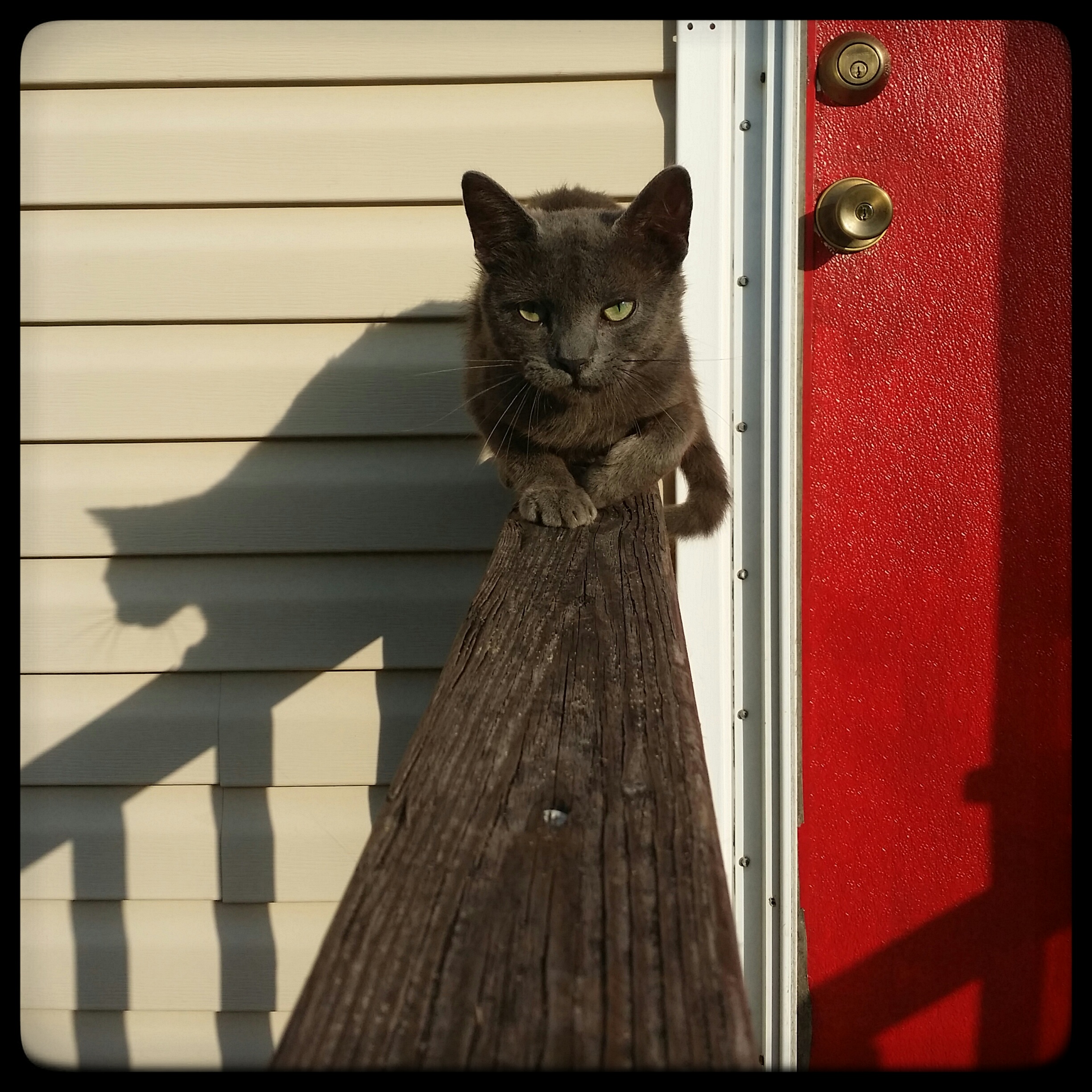 You might be surprised, but living out here in the country, there are a lot of stray cats. I KNOW. Who would have thought it?

We saw the first cat the first time we came out here, I think. Maybe the first week we were here. Big orange cat, he walked through the yard in the front of the house, stopped, watched us, pooped, and kept walking. We knew what he thought about us! I think I got a picture of him, hold on… ah – here we go. April 5th, 2015… 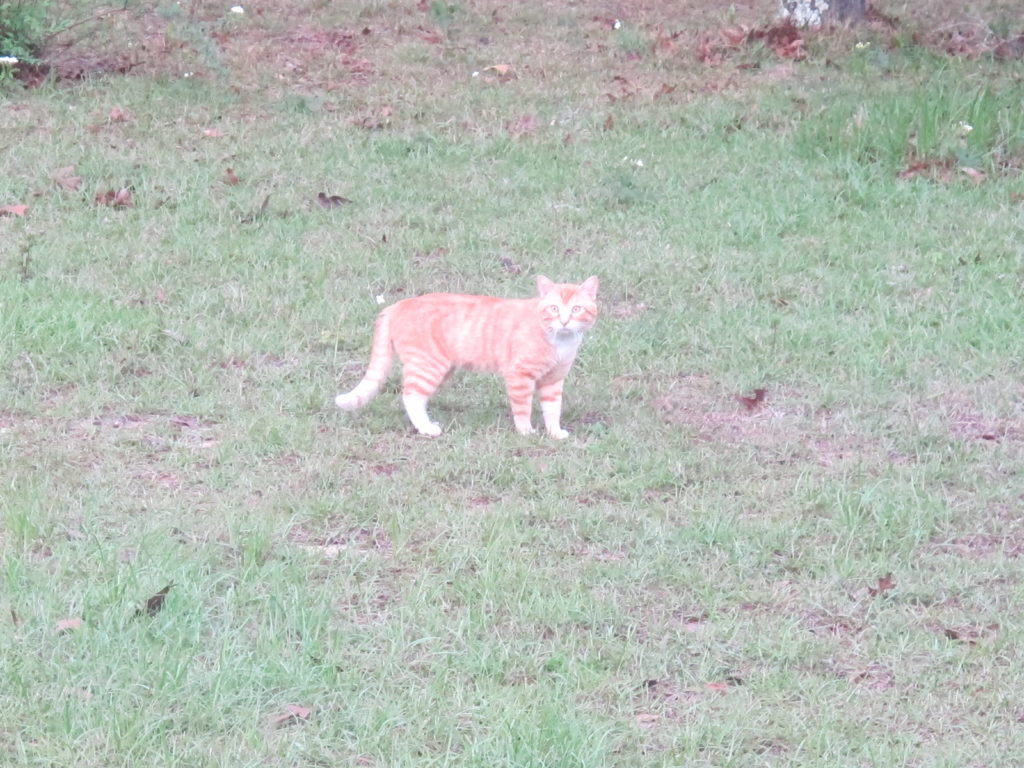 He also showed up on the Game Cam a few times, and a black cat, and a cat that is mostly black but a bit of white on the face and white feet.

Now, if you know me at all, you know what an animal lover I am. So I tried not to get involved with the stray cats. They’d either eat lizards and survive on their own, or they’d get eaten by foxes. It’s nature’s way, and I can’t care for every single stray cat that struts by.

YOU KNOW WHERE THIS IS GOING, RIGHT.

Stray cat strut, I’m a ladies cat
I’m a feline Casanova, hey man that’s that
Get a shoe thrown at me from a mean old man
Get my dinner from a garbage can

We have a compost bin, and while we’d seen some cats in and out of it on the game cam, mostly they ignore it – I mean, you’d have to be a pretty hungry cat to munch on lettuce, old bananas, and coffee grounds. But Cetty and Joe put out their meat scraps, and that draws animals. So I wasn’t too surprised when, in March, a big black male cat with two kittens – one gray and one black – showed up. They didn’t seem to want to hang out, but they’d eat scraps all day long if they could. So Joe started leaving out cat food, and they became even friendlier. In late March, the little gray kitten walked right up into the studio one day and decided he liked it, and us. 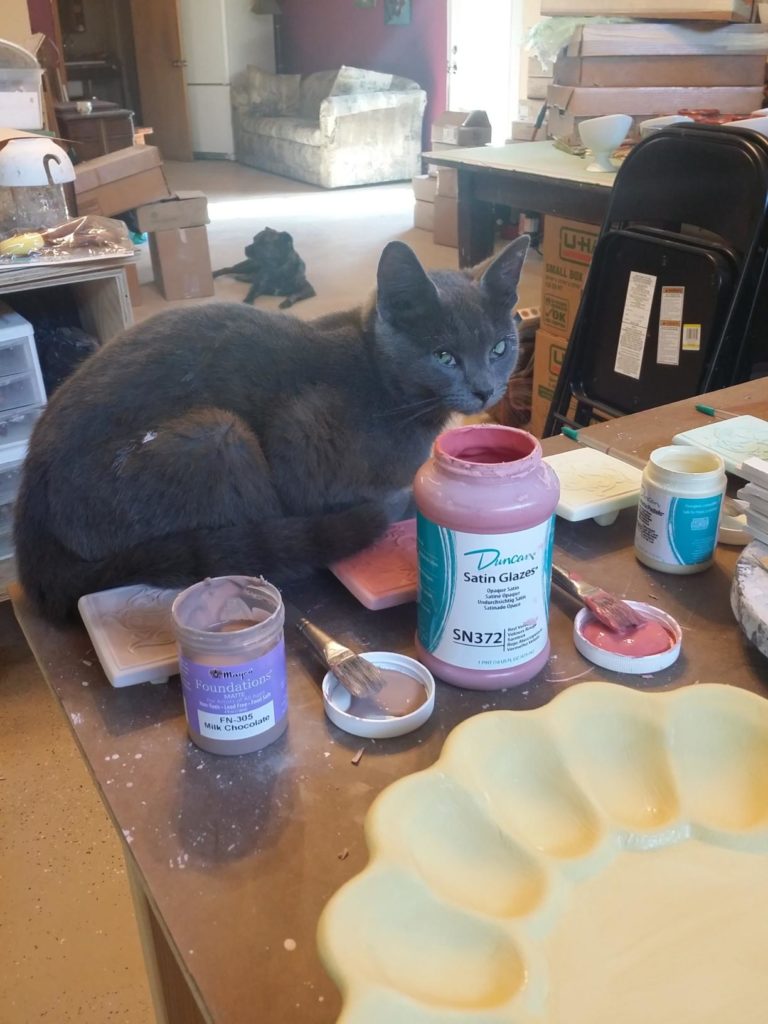 He’s been trouble ever since. In fact, when I took him to the vet to get him fixed, and they asked his name, I said “Troublesome”. Bill and Doris used to have a cat named Troublesome… the kitten had followed Bill home one day while he was walking their dog, Doctor Spot, and that was that. This kitten also likes to go on walks with me when I walked the dog, and he’s definitely got his own mind, so… there ya go. But he’s also called Shadow (since he’s always underfoot), and Little Dude. We’re lax with the names around here. 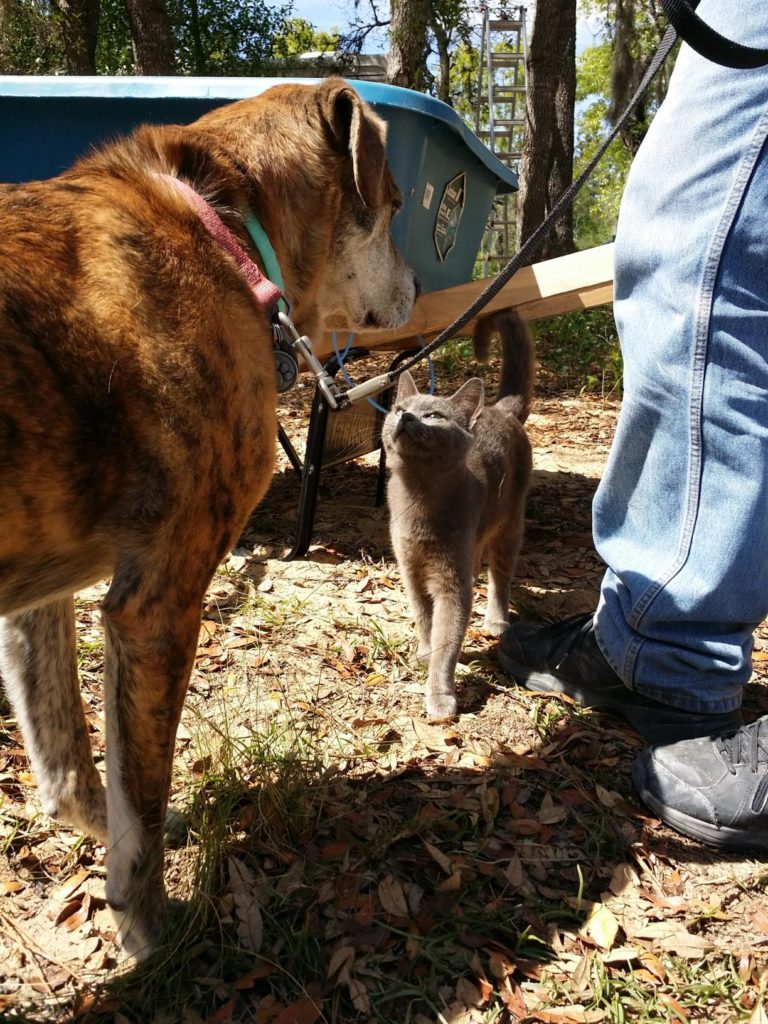 He’s introduced himself all around – friendlier with some of our pets than with others – and just generally made it known that we are now his people whether we were expecting it or not.

It was another month though, end of April, before his dad would let us near him. 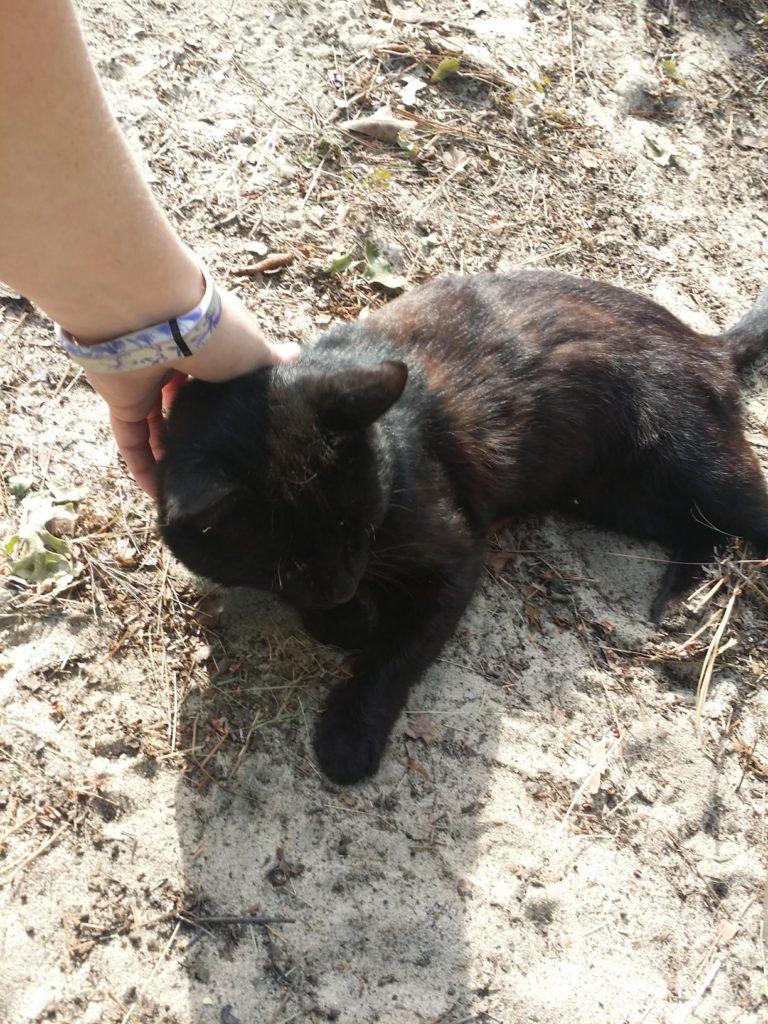 The first time he let me pick him up, he tried to purr. It was adorable. It was like a car engine that wouldn’t quite turn over; rrrrr, stop. Rrrrrr, stop. PRRRRRR – cough cough – rrr, stop. 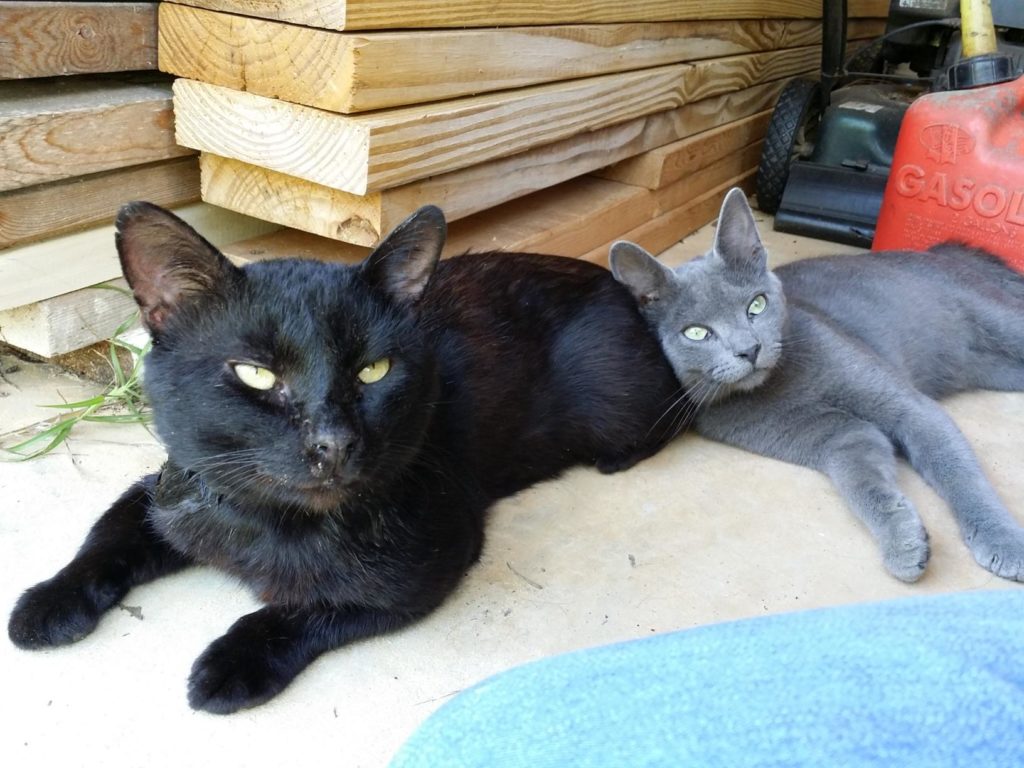 It didn’t take him long, after that, to trust us. He started hanging around, and defending his territory from the big orange cat. The big orange cat, you see, had designs on the big black cat’s daughter. She still wouldn’t come near us at all – by the time I could even get close enough to her to see what gender she was, she’d already had a litter of kittens – I could tell that she was nursing. Sigh. I think that discover was around the middle of May. 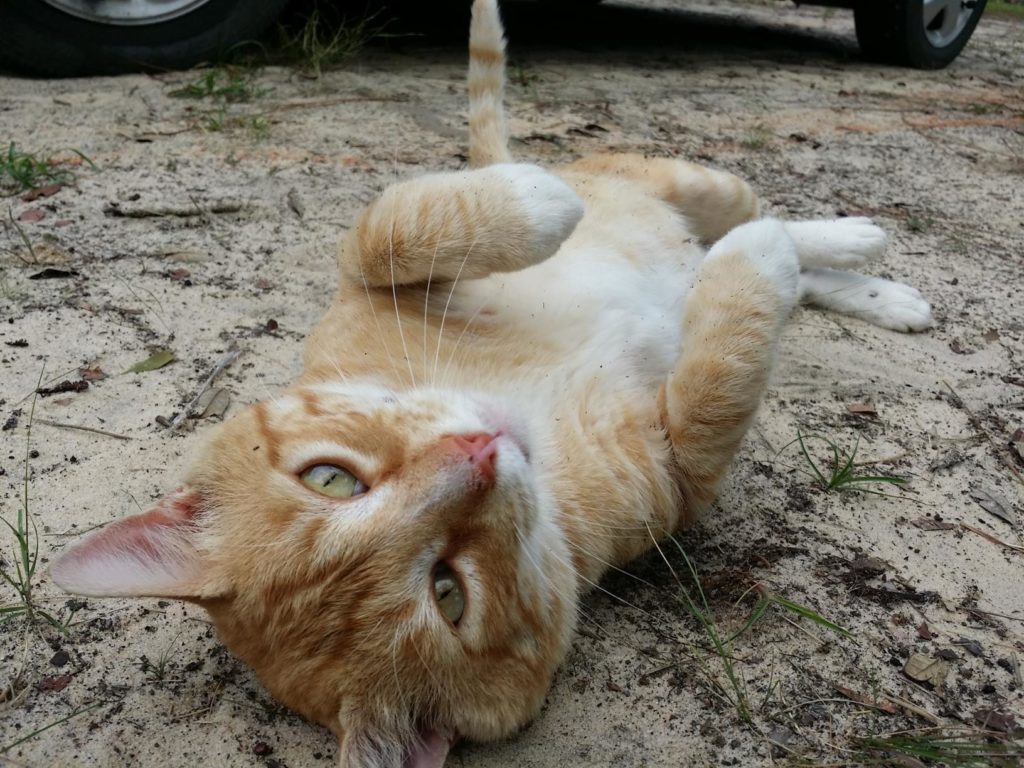 It wasn’t until the beginning of June that the big orange cat would let us get near him. And it was like, well, he knew what people were for – head scritches and bottomless bowls of cat food – but he couldn’t quite bring himself to really enjoy it. By now he’ll tolerate being picked up for a minute, but he prefers to be on the ground where he can easily get away if he needs to. I don’t think I’ve ever heard him purr. Mostly he hangs around in Tim’s workshop and meows at people as they walk by. 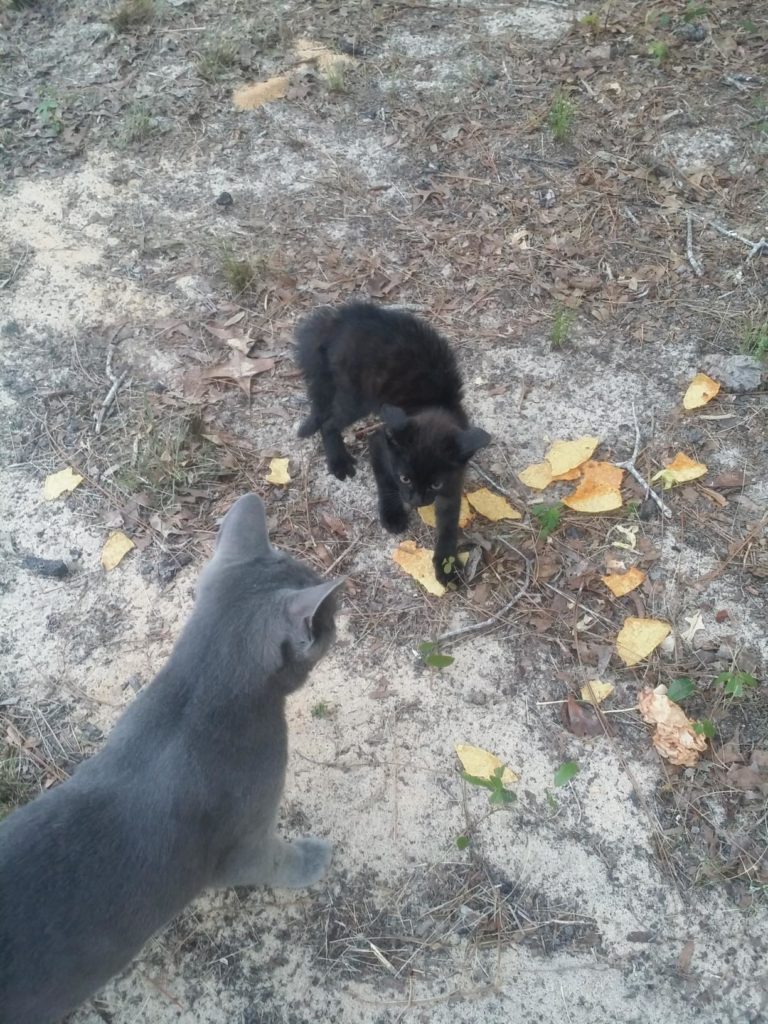 Around the end of June, Mama kitty started bringing her little kitten around for scraps and cat food – by this time we’d moved the cat food into the workshop, because when raccoons would come to eat Cetty and Joe’s scraps, they’d come right up to the RV and eat all the cat food, too. So there’s a bowl of food and a bowl of water in the workshop, but Cetty and Joe do still put their scraps right outside the coach – that way, too, they can see what’s eating them. Anyway, after a couple of weeks of back and forth, trying to catch Mama and/or trying to catch the kitten, we finally snagged the kitten (who is a boy). She had been showing up without him for about a week, and we thought he’d been eaten by a fox, but then one day he just showed up in front of the RV as bold as you please. 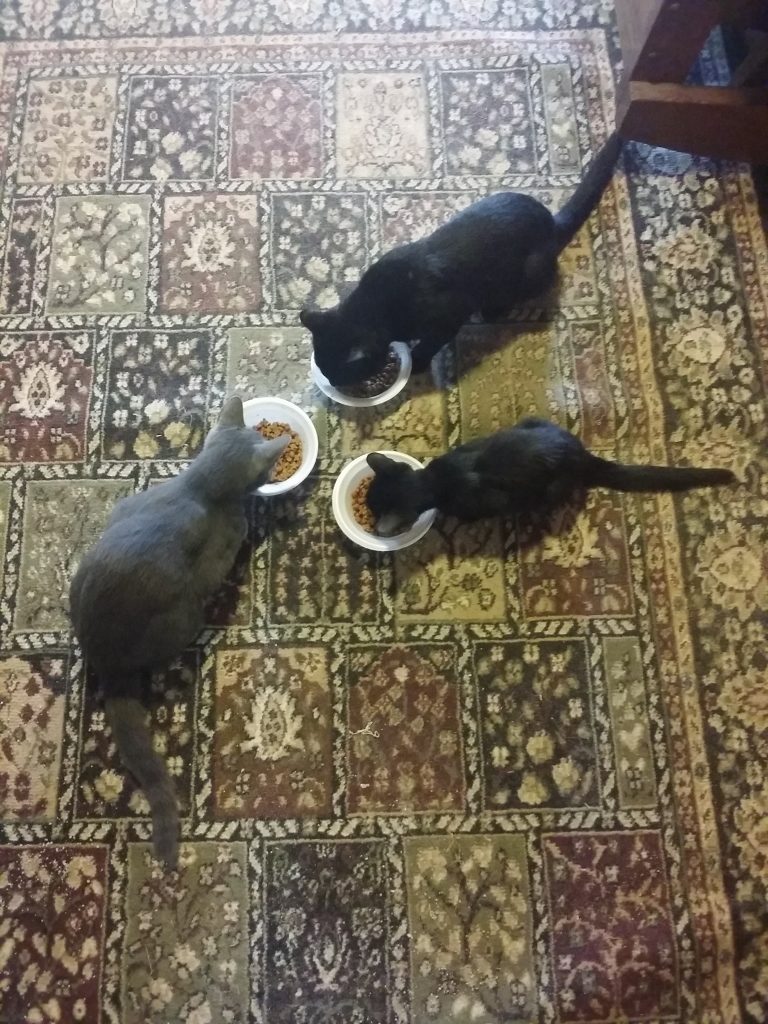 I immediately indoctrinated him into studio life, because I was worried he was too little to be out there on his own. Big Orange Cat seemed willing to watch over him, but I am a giant sucker and at this point we’d already kind of adopted the little gray and the big black cat, so, fuck it, what’s one more. He stays inside the studio at night, and one of the other cats will usually stay with him so he’s not lonely. SHUT UP, STOP GIVING ME THAT LOOK! 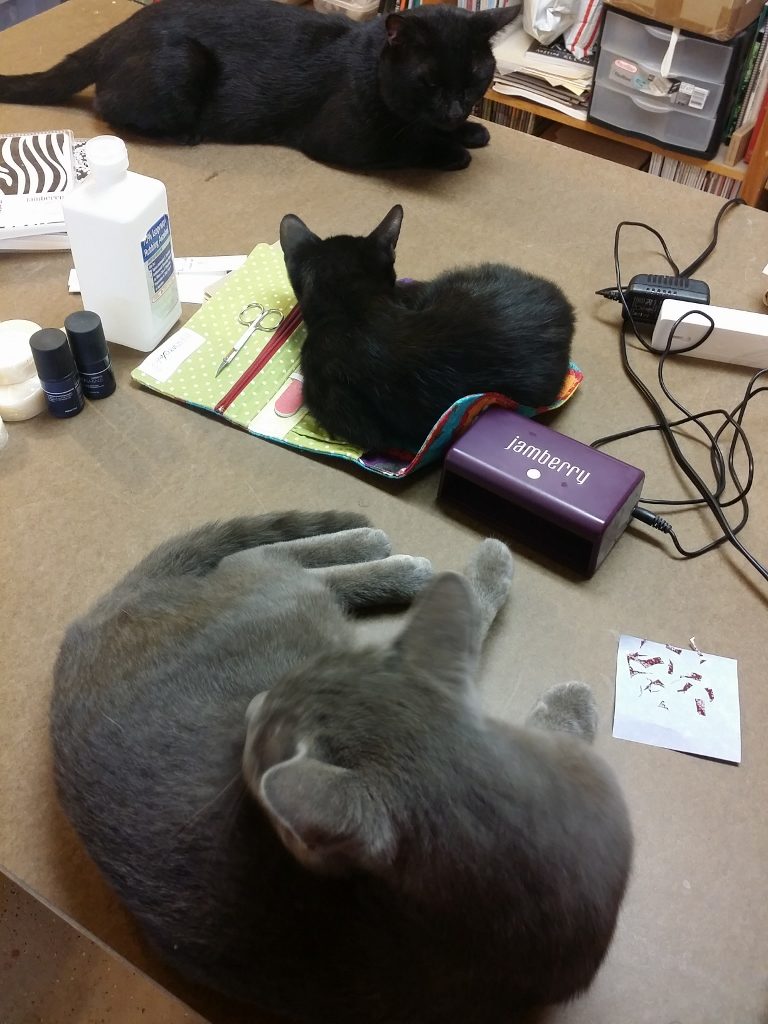 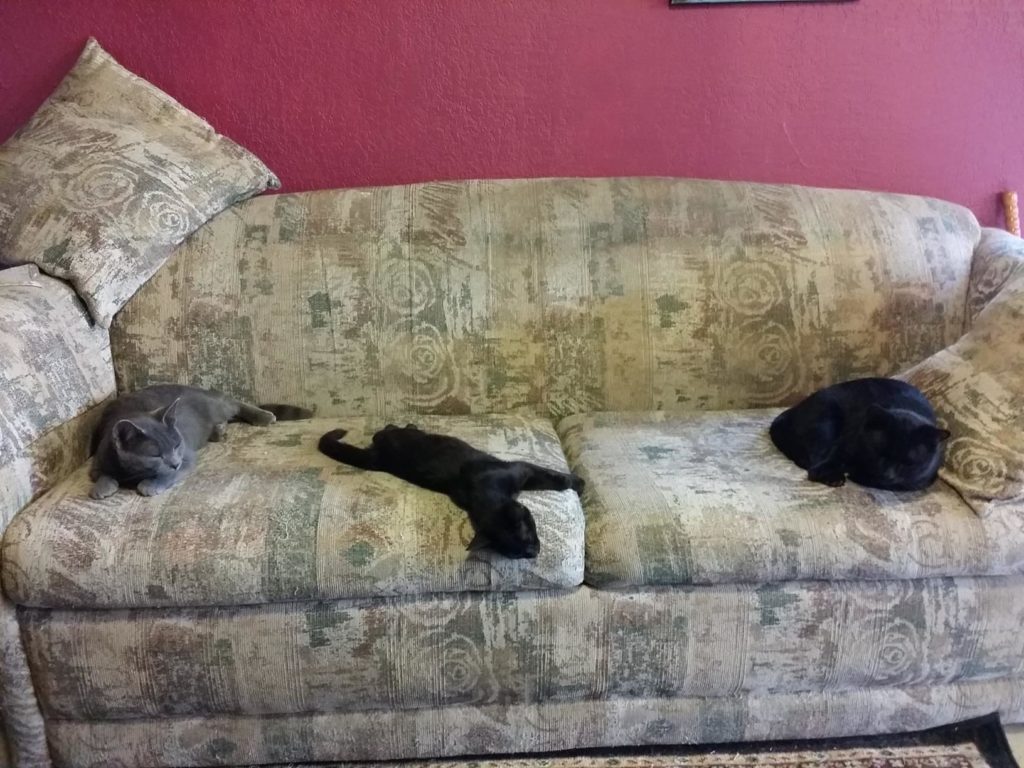 As you can see, they all get along pretty well. Troublesome and Bowie (we named the tiny black kitten after David Bowie) get along like littermates, even though they’re uncle and nephew. They’re only about eight or nine months apart in age. Severus (we call the big black cat after Alan Rickman’s character in Harry Potter, although Cetty and Joe call him Limpy Dan because he and Big Orange Cat got in a huge fight one night and he was limping around for a few days afterwards) will play with either but prefers to sleep all day if he can. 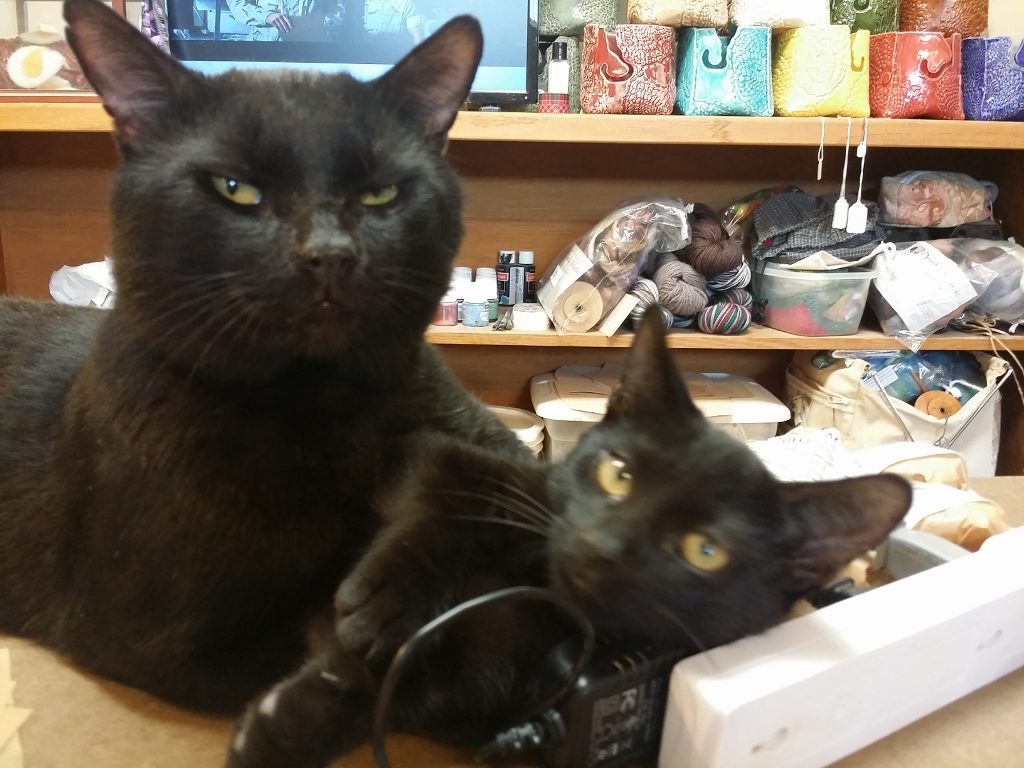 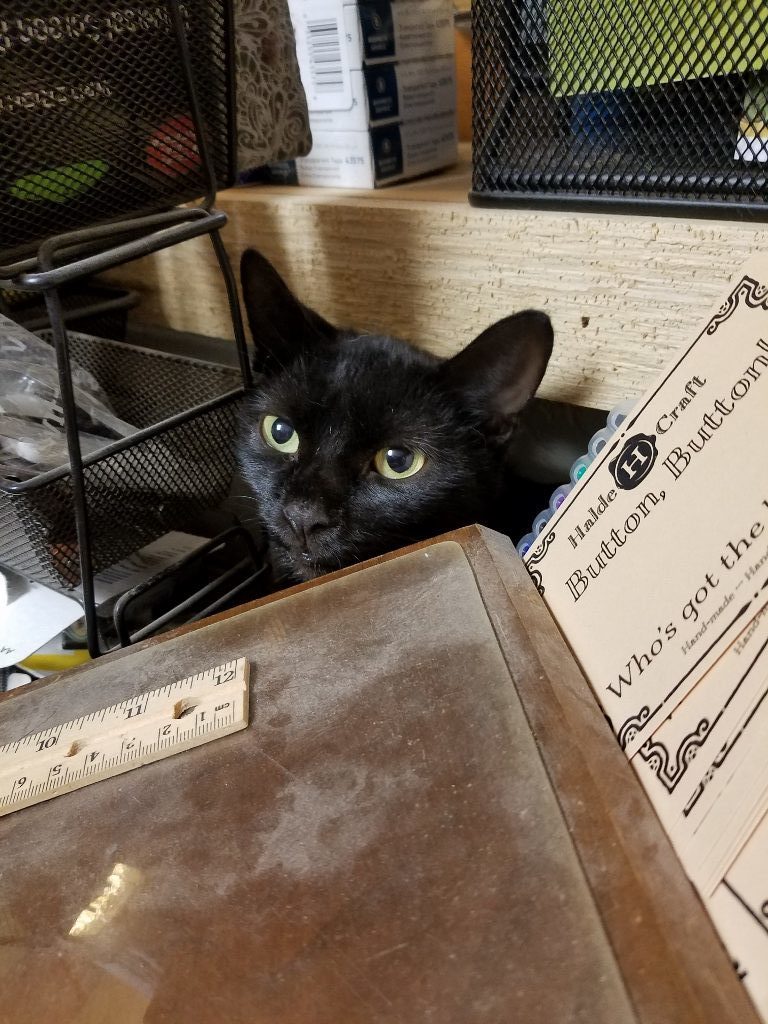 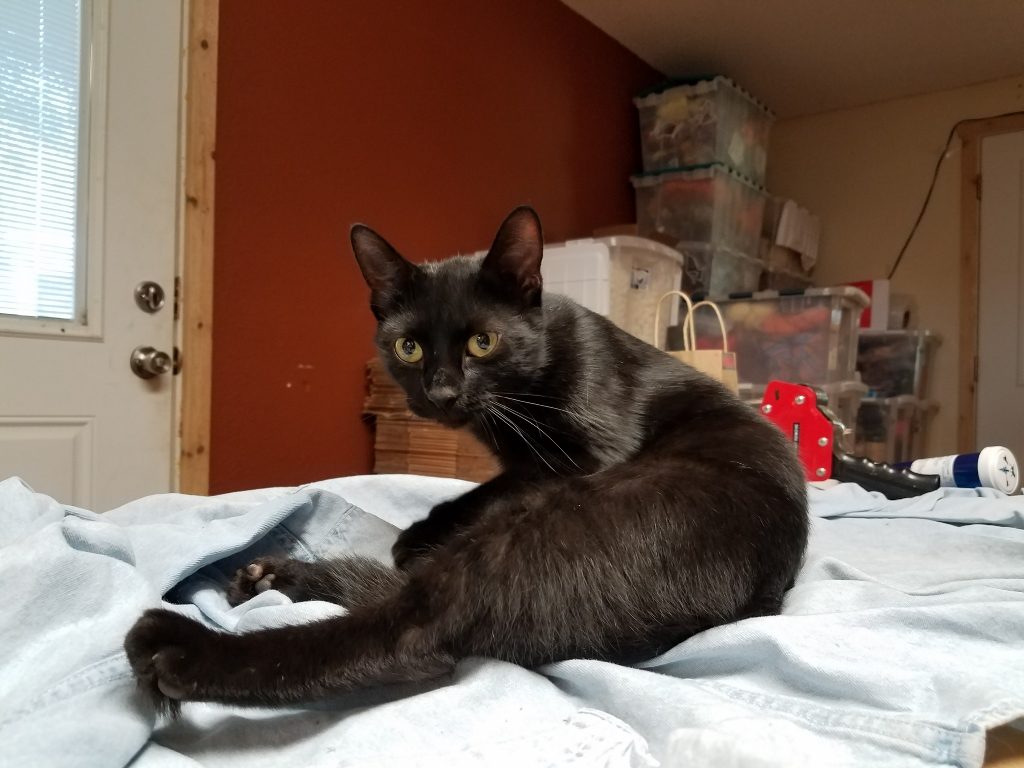 She lived in my office for about a week, while we got her spayed and looked after her for a few days after the surgery. We found out she was pregnant again when we took her in to get her spayed, but they took care of that. Now she doesn’t have to have any more kittens, poor girl! Ever since the surgery, she’s been living under Cetty and Joe’s RV. She comes out whenever she hears Joe come out the door, and tries to get in his lap and be all lovey. She doesn’t seem to like any of the other cats, even the one she gave birth to. I have a friend who is – hopefully – going to adopt her soon. If not, anyone want a spayed, friendly female?

And that’s how, from March through August, we wound up with five outdoor cats. To go with our four indoor cats, and two dogs. Sigh.

I don’t bother chasing mice around
I slink down the alleyway looking for a fight
Howling to the moonlight on a hot summer night
Singin’ the blues while the lady cats cry
“Wild stray cat, you’re a real gone guy”
I wish I could be as carefree and wild
But I got cat class and I got cat style
– Stray Cat Strut by Brian Setzer 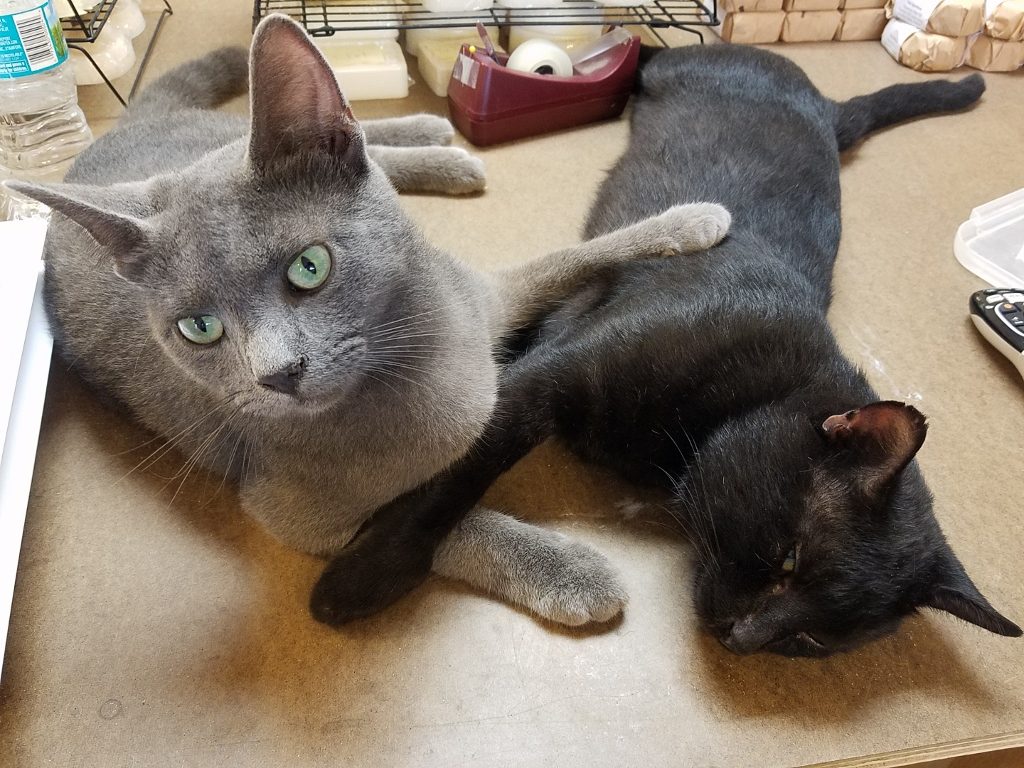 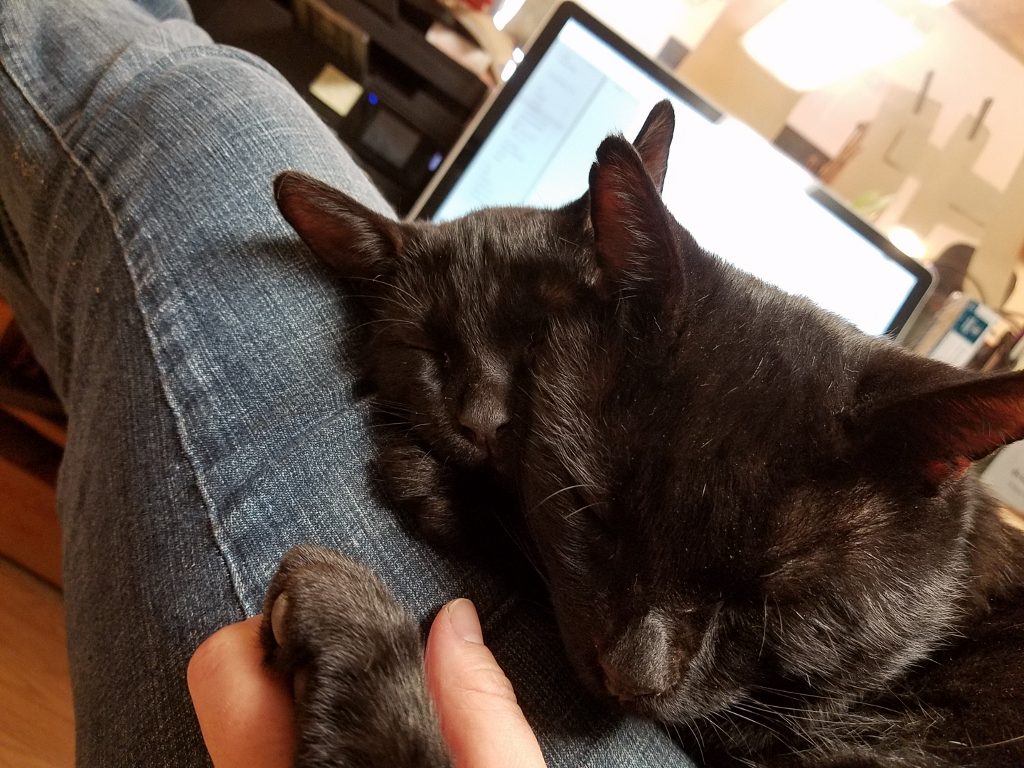 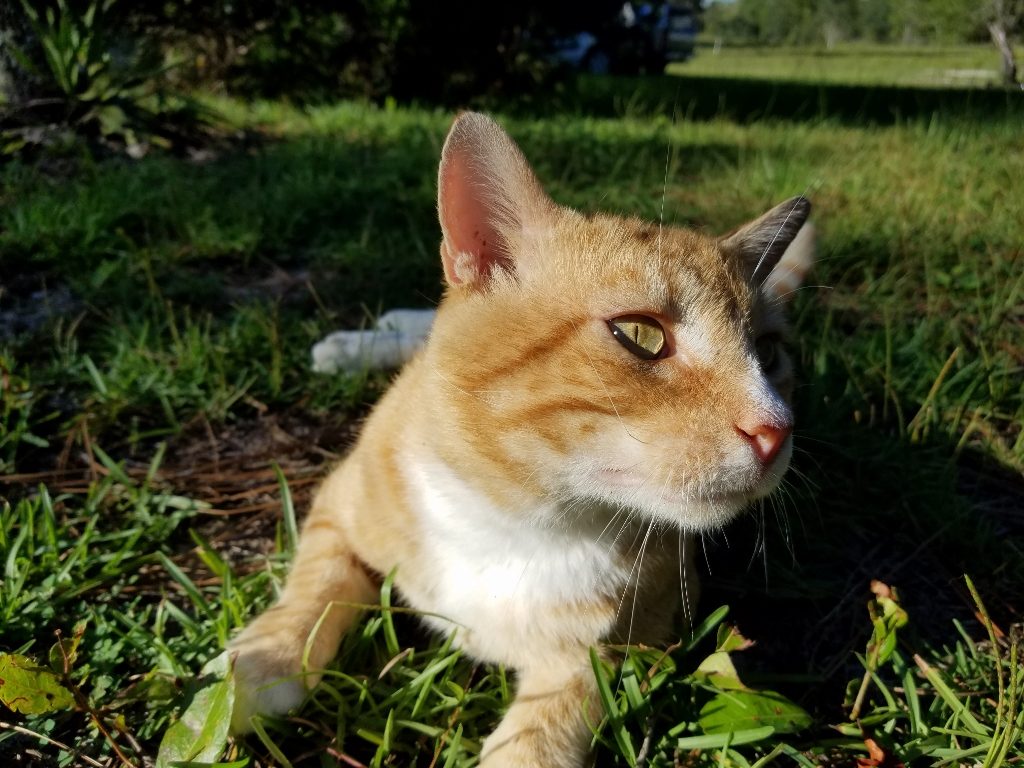