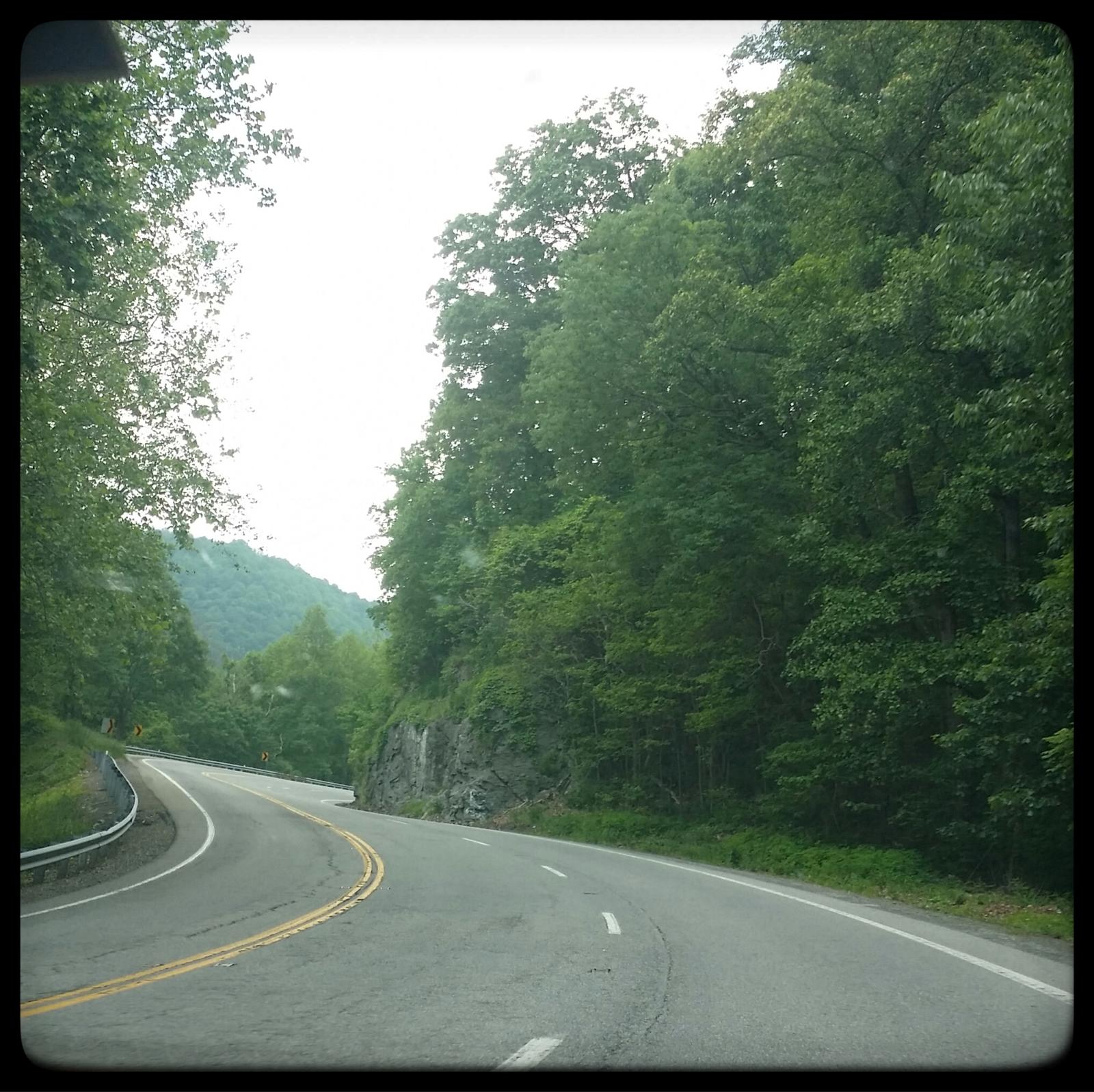 Sharon and I recently took a road trip to West Virginia for a friend’s wedding, then over to Baltimore, and back down. A lot of driving, you say? Well, yes (about 2000 miles), but believe me… we had things we wanted to do on the way. Here’s the second thing we did on the road. 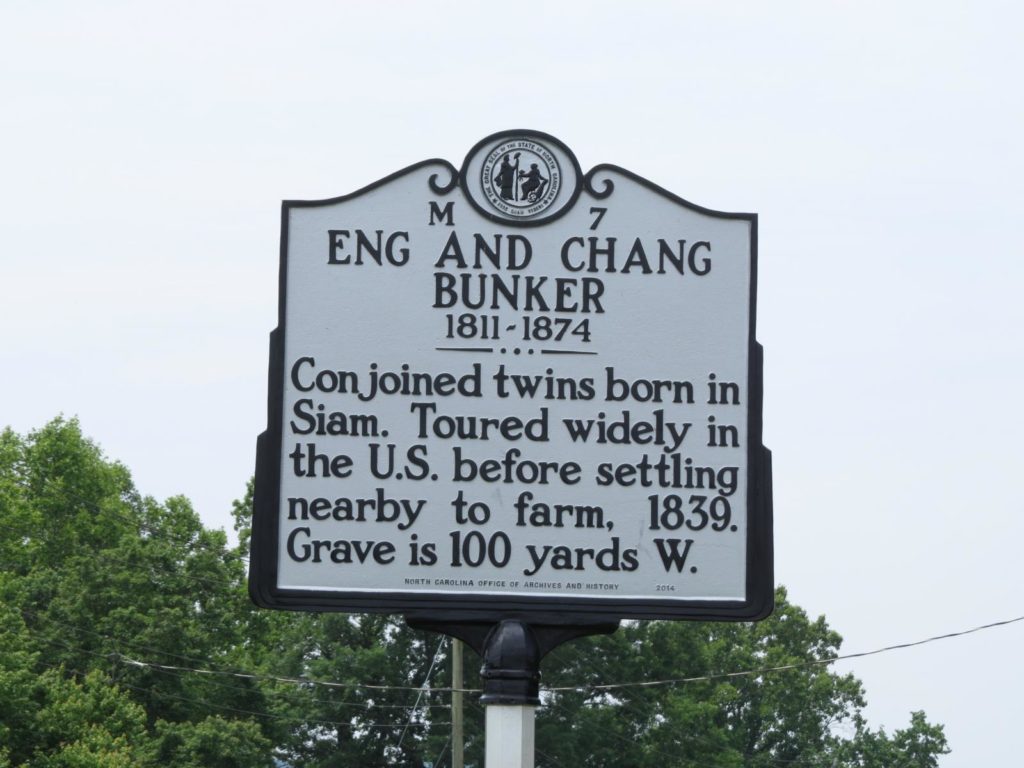 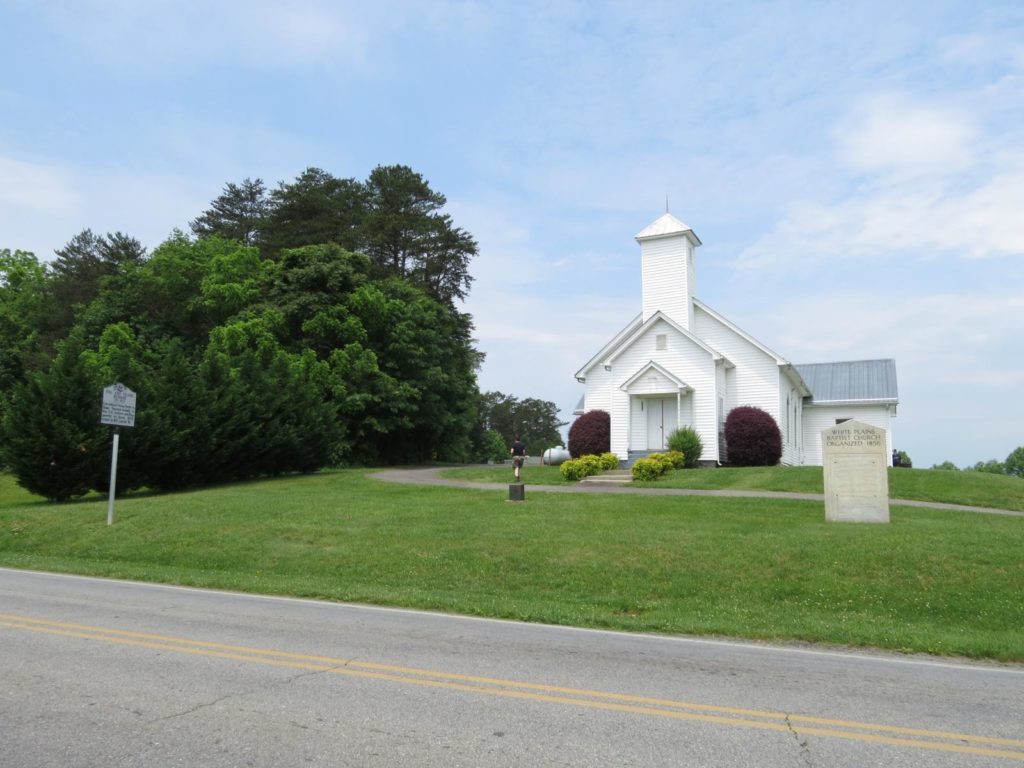 They didn’t do as much sideshow/vaudeville as the Hilton sisters, and in fact preferred to settle down as plantation owners in North Carolina and marry. Each married a different woman, a pair of sisters, and they both had an amazing number of children. Seriously, were they racing to have kids? Was it a competition? Because one had ten children, and the other had eleven. Good lord. 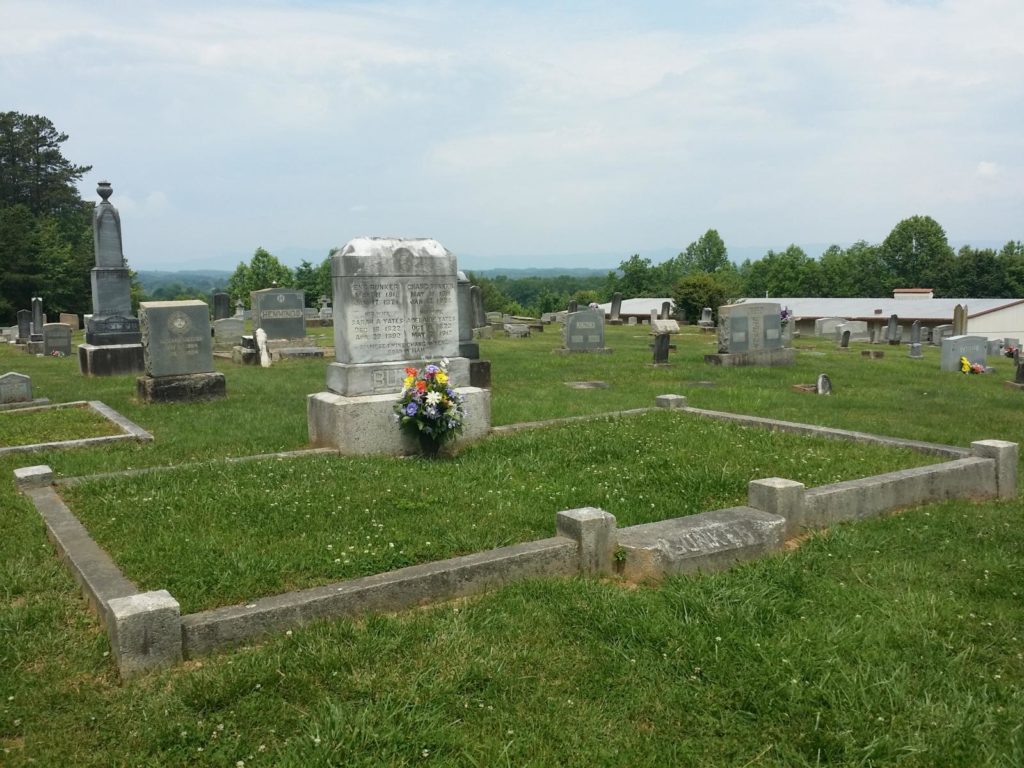 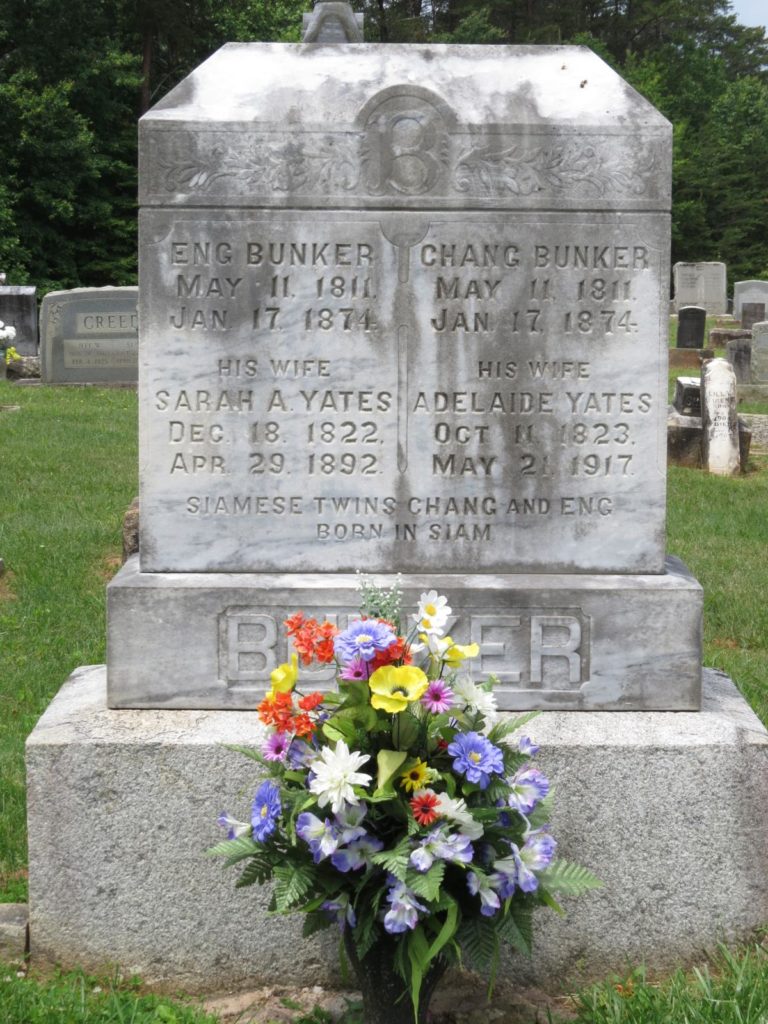 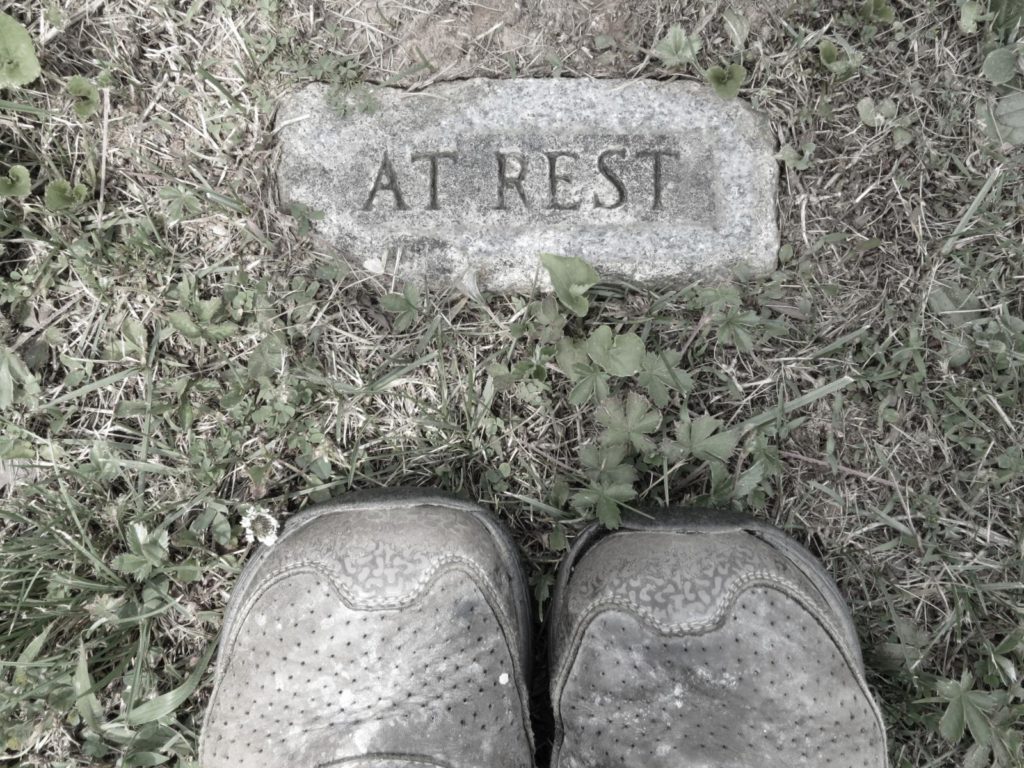 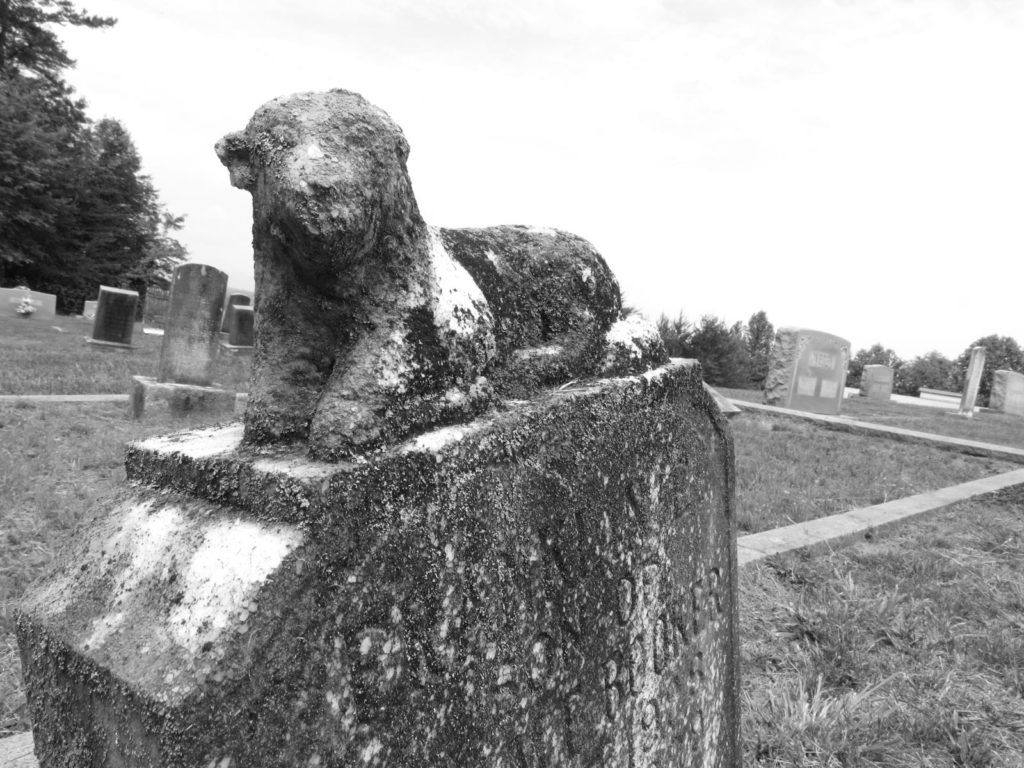 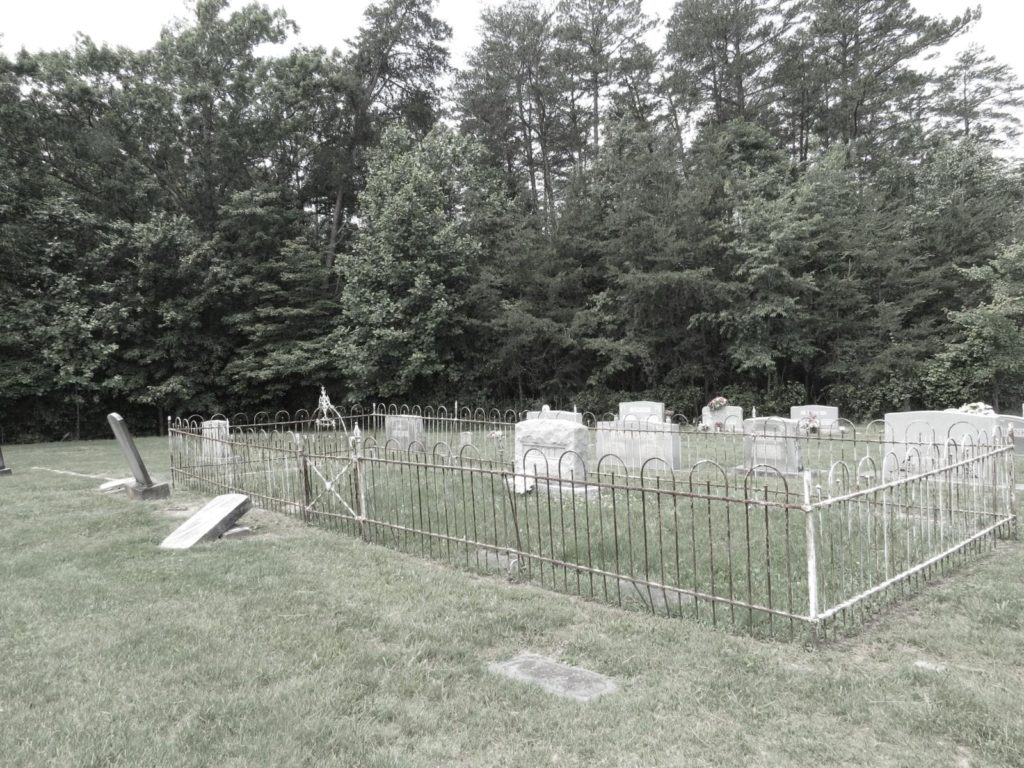 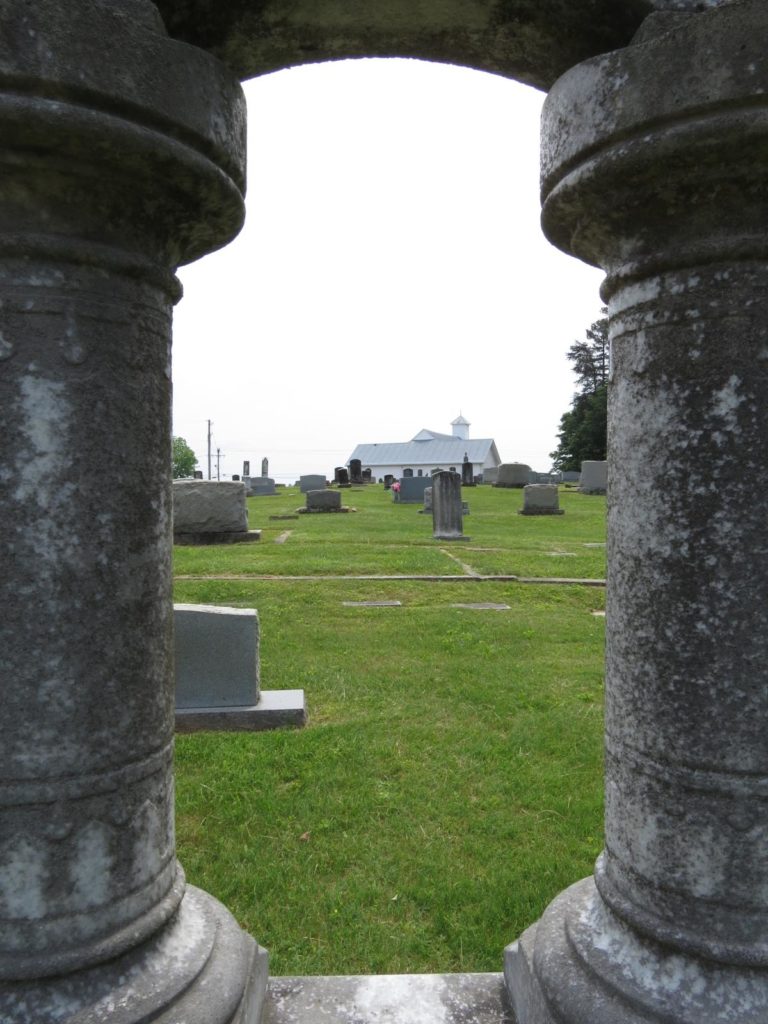 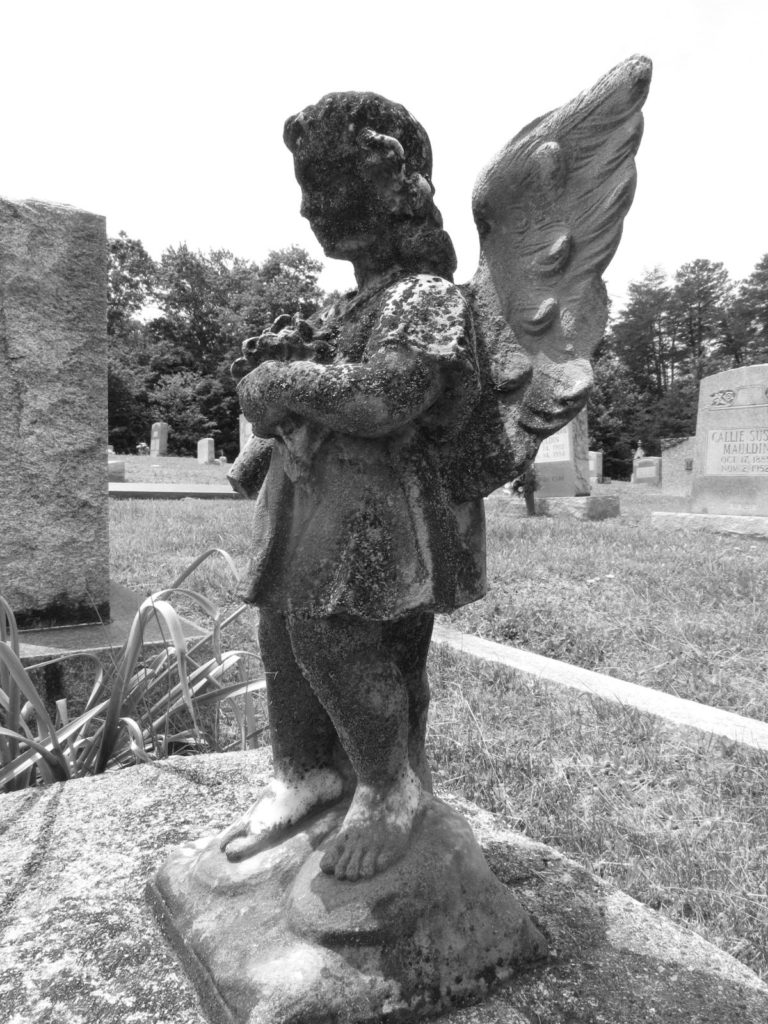 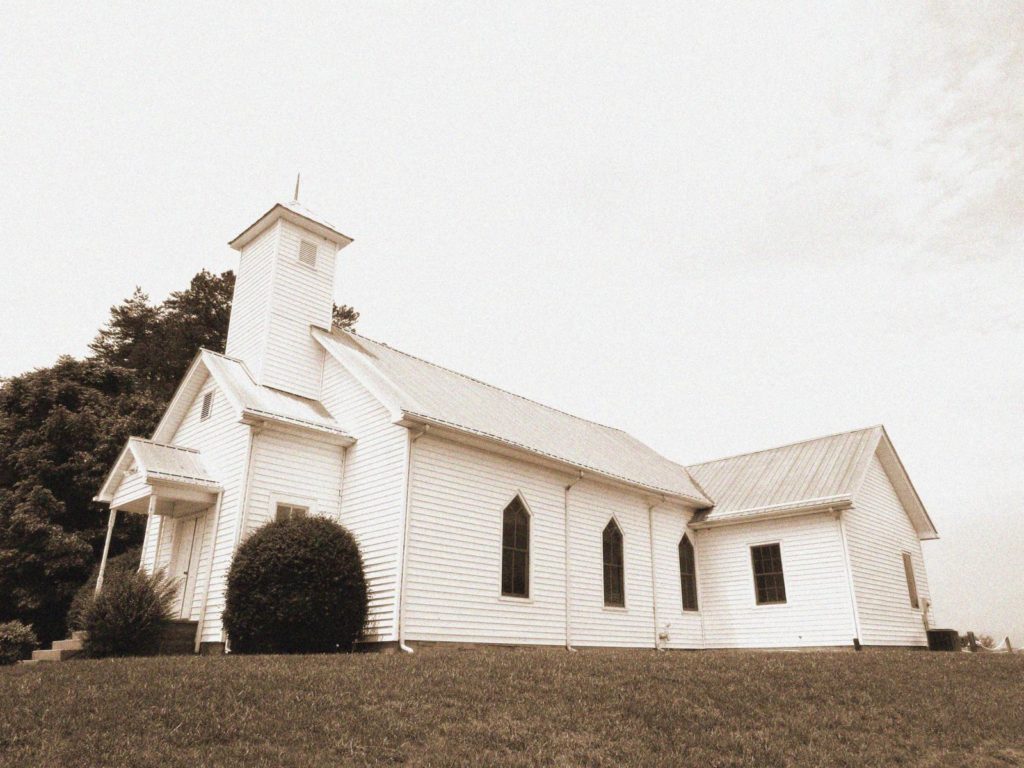 After we were done at the graveryard (very small, but so pretty! And a lovely view of the mountains.) we decided it was probably lunch time, so we thought we’d look for a place to eat. Cetty had mentioned on my Facebook picture of where we were that there was a really good place nearby that has pork sandwiches. Since I have food allergies, that sounded like it might be dangerous if everything was mixed with mayo, so we consulted Google Maps. And here is where I think Google Maps is doing it right — you can search for places to eat around your current location (this is probably not news to anyone) but for the first time I noticed they also have categories, so it’ll only show you certain ones rather than EVERYTHING. We looked under “where the locals eat” and under “good food” (we looked under “cheap food” but predictably it was full of Taco Hell and the like). A place that came up under both where locals eat and under good food, was Gondola. 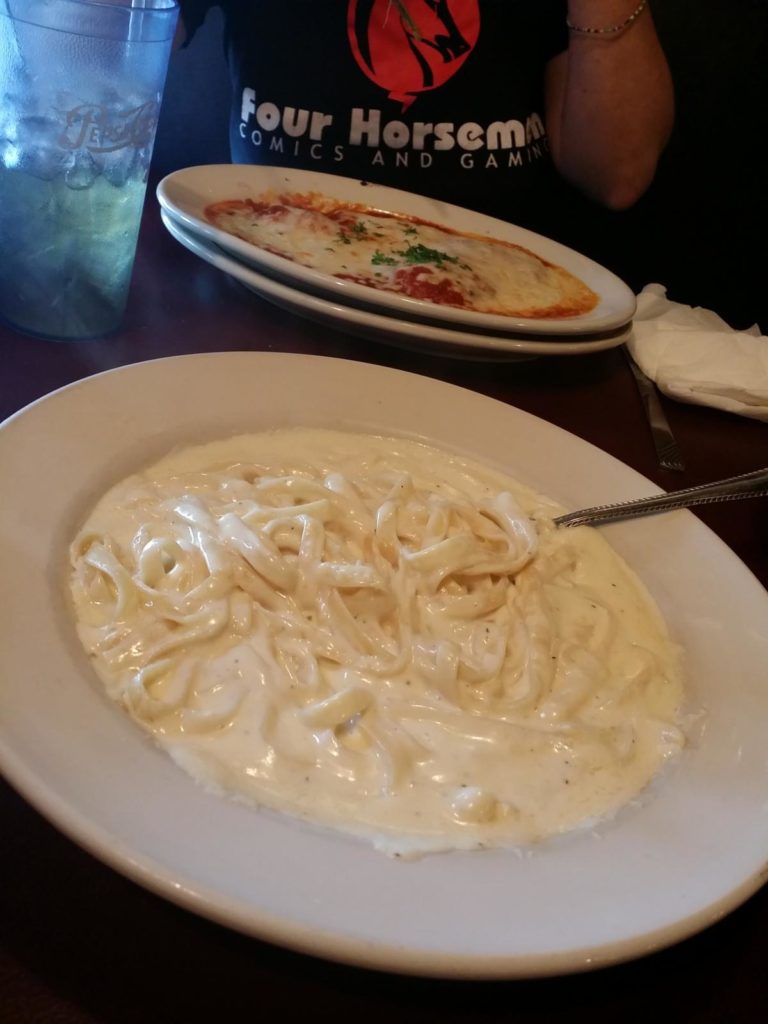 I feel pretty confident in saying that this may in fact be the goddamn best Fettuccine Alfredo I have had. Ever. When we drove up, I have to admit, the place looks a little “meh” from the outside… but I’ve long been of the suspicion that the places that spend the most on the outside look might not have it goin’ on inside. And it was clean and charming inside, and they took my questions about the food seriously (some places, I’ve found, use egg in their alfredo sauce in order to thicken it — a cheap, and for me, deadly alternative to actual good ingredients like cream). And I’ll be damned if that wasn’t THE BEST I think I’ve ever had… and I have eaten Fettuccine Alfredo a LOT. I was sad that I couldn’t eat the whole plate, and that taking it with us would have been futile because we still had a good six or so hour drive ahead of us. Seriously, if you find yourself in the Mount Airy area of North Carolina (whether you’re going to see Chang and Eng’s grave or not), do yourself a favor and stop in at Gondola. You will not regret it! (And they’re not paying me to write that — they don’t even know I’m writing it. I was just that pleased with my food!) 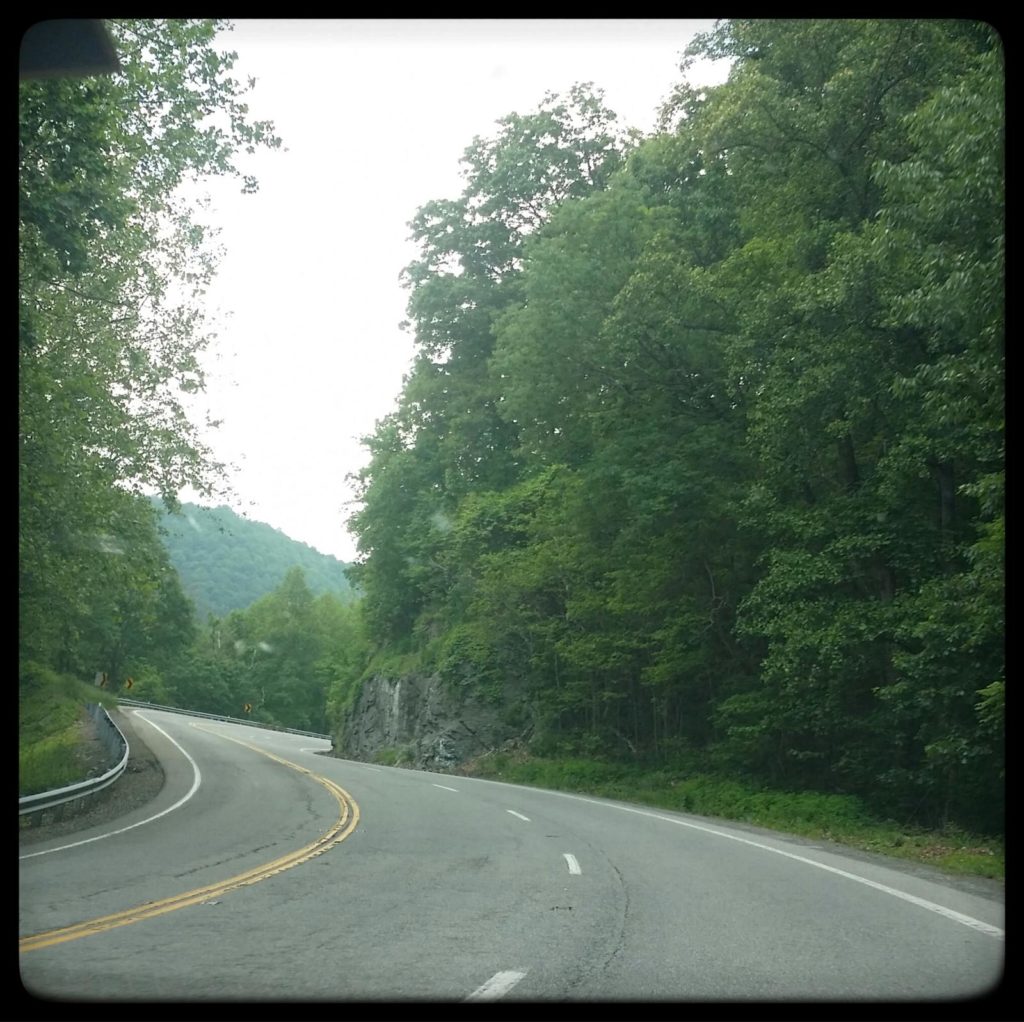 Pretty soon we were getting into windy roads, and Sharon discovered a new love for her hot little red sports car. That thing takes curves like a *champ*, and Sharon is a great driver. 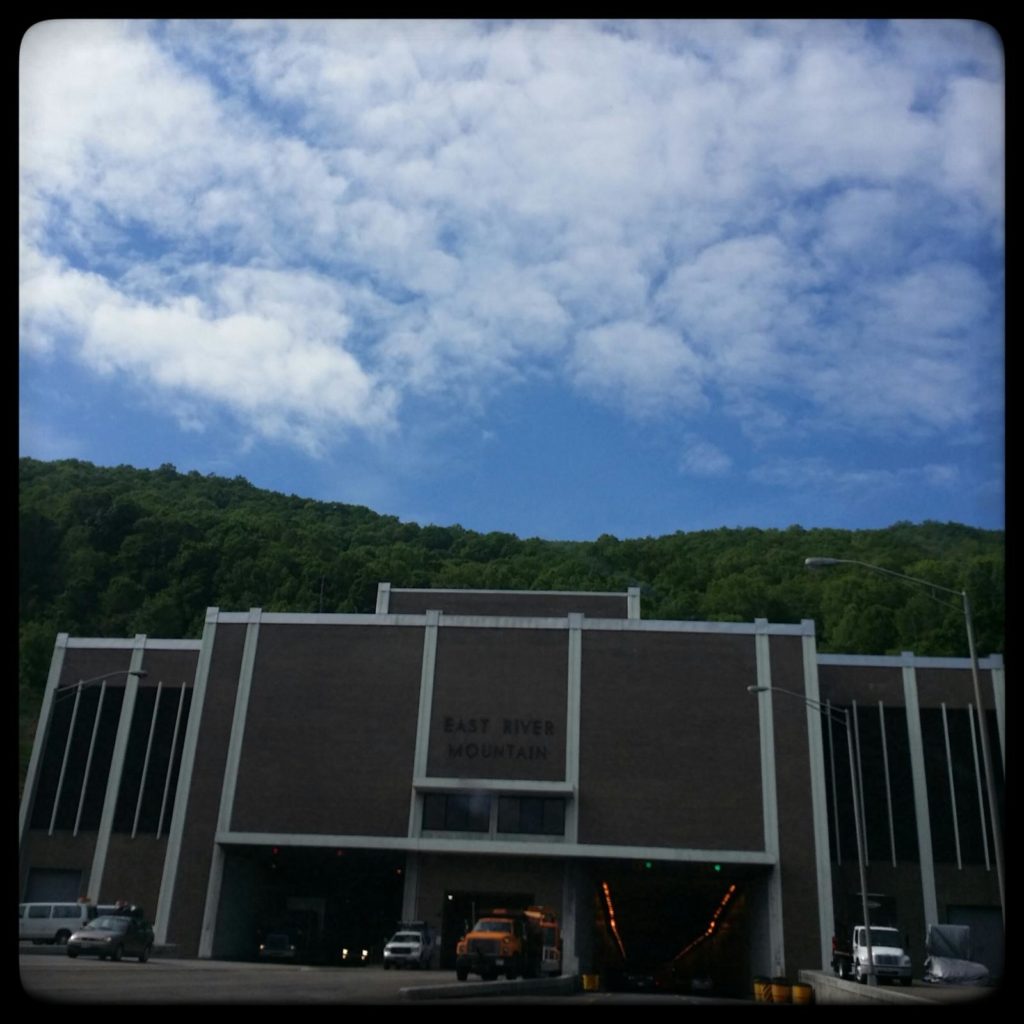 Next stop (and next post) will be Wild and Wonderful West ByGod Virginia! Stay tuned….! I know these posts aren’t coming quickly, but I keep getting sidetracked by work. Hey, at least two posts in the last week is better than none since, like, April, right?! Anyhoo. Stay tuned! 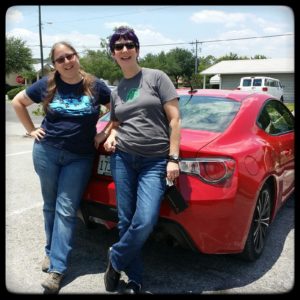