Have we told you about the clay pit? About why this property was up for sale in the first place?

As near as we can tell – and a LOT of this is guessing and conjecture and putting things together that we’ve heard through the grapevine, so, take this with a grain of salt.

A family with three or four kids used to live there. What they did for a living (the parents, not the kids) is anyone’s guess (although we do think we’ve finally figured out what the studio was for, but that’s a different story) but allegedly at one point in time they started a clay pit without necessarily getting any sort of permits for it first.

That there is a clay pit is not a question; it’s definitely there. When we originally looked at the property, the listing was for 18 of 35 acres, with the rest parceled off to a different listing. 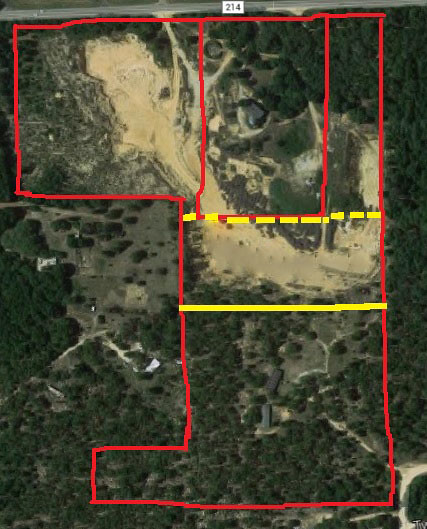 The red outline is the original 35 acres, sort of Y-shaped, with a ten acre parcel taken out of the top middle (we don’t know anything about that house, other than it looks like it’s on top of a mountain, and part of the pit appears to be on their property). The yellow dotted line divides the original listings; the 18 acres we would have gotten (on the bottom, with that little peninsula off the southwest bottom corner) and the remaining acreage easily divided into two lots on either side of the ten or so “mountain” acres.

But there was no way we wanted even just three acres of that pit (Tim looked on the property appraisor’s office and did some math to find out how many acres “our” part of the pit would be). What if DEP came wanting us to repair the damage, or backfill the missing dirt? 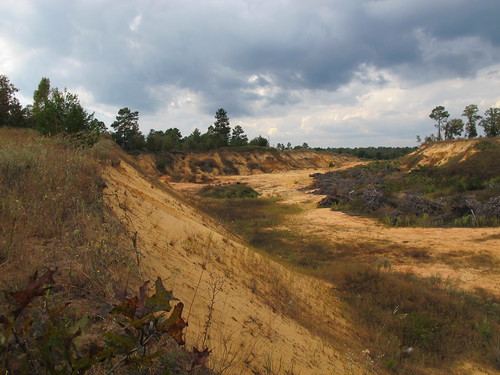 As you can see, that would have been a lot of dirt. We didn’t want the responsibility of fixing that (as much as we love a good project). That would be expensive to backfill, and if there were outstanding fines we’d find ourselves responsible for if DEP had issues…? Yeah. So we asked them to drop the price a little, and take the three pit acres off – to the solid yellow line on that aerial photo.

We also asked that we get proof they filed the parcel segregation with the county, and of course we’d get a copy of the survey with the sale. Those requests were met, and then you guys all know the rest of the long story that got us to actually getting the property. During all of this, one company did the plat and the split, and then another company came in to do the survey later. We found out during the survey that lines were drawn a little wonky and our property turns out to be 15.46 acres, and the rest adds up to 19.54.

I can’t remember if I talked about the closing; how the owners (not the family, but a flipper who bought it at auction when the family was evicted or moved out) didn’t come, but sent a representative from the title company, and he was late, but not so late that we couldn’t do it that day, and so on. 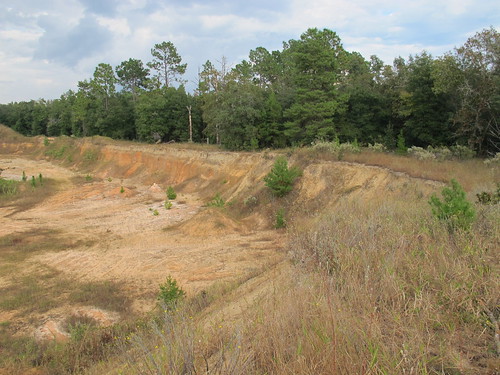 So imagine our surprise when I got a phone call last week.

At first it started off like a sales call. “Is Mrs. Mangled-last-name there? This is so-and-so from such-and-such-title-company.” It took me a minute or two to figure out that she wasn’t calling because she’d heard we’d bought a home and she was trying to sell me something; that she was from the title company that had sent the guy down there and there was an unfortunate problem with the paperwork.

They accidentally had a typo on the paperwork and could we resign?

What exactly was the typo?

They had us sign for a little bit more than we were supposed to get, in acreage.

Well, could she just come out, please, and tell me what the problem is? Because I’m busy.

They accidentally signed over all 35 acres to us, and they’d like us to pretty please with sugar on top sign over the other 19.54 acres if that’s not too much of a problem.

HAHAHAHAHAHAH fuck no that’s not a problem, if we didn’t want THREE acres with an un-permitted clay pit on it, we don’t want TWENTY. Hahahahaha. Hah.

So that began three or four days of back and forth of trying to find someone down here who could get the paperwork to us, or could they have someone drive it down from Jacksonville like they did for the original signing, or… or, or, or.

It was going to happen Friday, but then it didn’t. Then they said they’d call with a two hour window, hopefully on Monday, and someone would bring the paperwork by the property and we could sign everything at home with the notary they’d send. 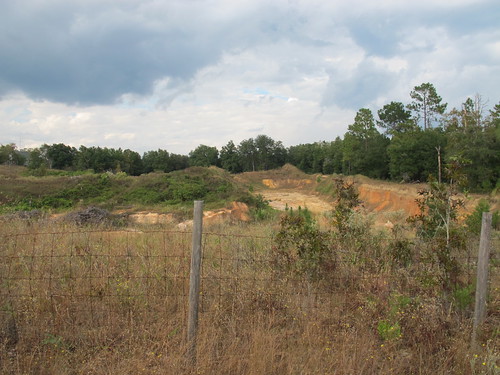 So yesterday morning (Monday), I was taking care of a friend’s cat while she’s in the hospital (my friend, not my friend’s cat) and I texted Tim to find out if he’d heard anything yet. He said he hadn’t, so I was going to run to Best Buy and get the wireless router I forgot the other day, after which point I’d text him again, and if he still hadn’t heard anything I’d go on to the bank and order new checks… after which I’d come home and just pack until they called.

Not five minutes after I left my friend’s house – I wasn’t even at Best Buy yet – Tim texted again to let me know they’d called, and we had to be at the property by noon. It was 10:40. So I skipped Best Buy and the bank and flew home and we drove out to the property.

Where it looked like the paperwork they gave the woman, who knew nothing other than we were supposed to sign it, was the wrong paperwork. It appeared to read we were signing over the 15.46 acres to the seller, and keeping the 19.54 with the clay pit. HAHAHAHAHAH no.

A quick back-and-forth on the phone with a couple of different people didn’t resolve the issue, and there was NO WAY we were going to sign it incorrectly and trust them to fix it; so the notary left, the title company redid the paperwork in Jax, and faxed it to our Realtor in Keystone Heights. We had lunch at the new house, and then went to sign the correct paperwork, and then we went to Lowes and bought EVEN MORE PLUMBING SUPPLIES – how are there EVEN plumbing supplies we don’t own yet? – and new paint for the studio and a new stove hood fan/light thingy and probably a few other things I’ve already blocked from my mind. Lowes should practically be able to afford to open a branch on part of our property, we’ve spent so much there lately.

Oh, gawd, y’all, I’m so tired. But I was laughing in the car on the way out to the property today, and Tim and I both agree that out of all the things we want to blog about, this by far takes the mother-fucking cake. We couldn’t stop laughing; I’m not sure if it was the deranged laughter of escaped lunatics or because this is truly, deeply funny. I’ll let you be the judge.