Wait, what? Where has February gone? Wasn’t it just turning February? Now it’s the 22nd? 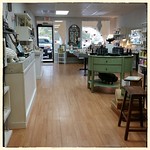 Long time followers may think this photo looks somewhat, hauntingly familiar. You’re not crazy; this is the amazing little boutique that’s gone into half of our old yarn store, in the Millhopper Shopping Center on the corner of NW 16th Ave and 43rd Aves. It’s called Aspect Beauty, and it’s full of soaps, fragrances, candles, and now, a selection of HaldeCraft ceramics. You can find some of my baby head planters, and a selection of soap dishes… and if you’re interested in anything else? Drop myself, or Amber, a line and we’ll be happy to make that happen! 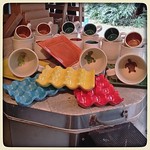 I had a great kiln firing at the beginning of February. Most of the mugs in the back are for something I’m going to be trying in a couple of weeks with decals. The egg crates have already sold out, but I put more in the kiln today and should be able to fire by the end of the week. 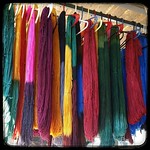 The first week of February was spent dyeing yarn, but then we had some damp weather and I couldn’t get it wound until the second week. This is what my back porch looked like until I could get all of it wound… so! much! COLOR! Most of this is my new base yarn, Joy, a sport-weight Superwash Merino. Have you tried it yet? 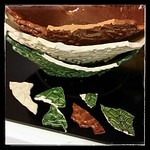 I am why I can’t have nice things. I discovered that in the chaos of December, I missed listing a number of Grace and Marie bowls. It happened to be a beautiful day, so I took them all – gently, and still in bubble wrap – outside to photograph. I had a wonderful photography session, with no dogs in the background of the photo, and lovely natural light… and as I turned around to bend over and pick up the camera from where I had left it on the ground, a stack of three bowls jumped off the raised gardening bed where I was taking the photographs, and broke. Even with the bubble wrap between them. Sigh. 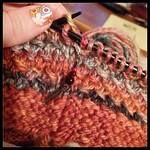 I’ve been getting a lot of knitting done lately — aren’t all knitters motivated by cold weather? I’ve done some knitting for my new nephew, I’ve done three of these hats now, for the 15 in 2015 (and I might cast on a third tonight), and I’m making a pair of complicated cabled gloves for our super-patient, amazing Realtor. 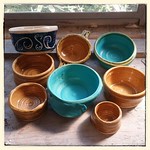 This is everything I finished in my six-week ceramic class, minus four more that I brought home to fire in my kiln. I had a really fun time in the class – I’m glad I took it, definitely, and I can see where I’d want to take other classes in the future to learn different techniques. For now, I’m content to practice and try to make a series of mugs that all generally appear to be the same size, heh, and work my way up to yarn bowls — the ultimate reason why I took the class and have learned to throw. 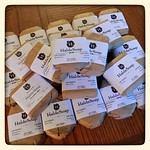 Once a quarter, I add up all the soap I’ve sold in the previous quarter, and for every ten bars of soap that sell, I donate one bar to Peaceful Paths, a local domestic violence network. Thanks to all y’all buying 230 bars of soap last quarter, I was able to make a 23-bar donation. Thank you, so much, for helping me to help others. 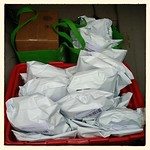 Here’s a picture of the domestic portion of February’s yarn club, about to be mailed. I think I’m going to need a bigger boat! Just a note if you’re still waiting for your club, since this was mailed out Tuesday — there was some sort of crash the week before, when the USPS installed a tracking/scanning update and it crashed their entire computer system. Combine that with the holiday last Monday, and things look wonky. Some people who have tracked their packages and seen that it hasn’t left Jacksonville… get the package the next day. So just be aware! 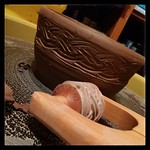 I haven’t had a lot of time to throw in the last couple of weeks, but I did get some done and trimmed… and then I had fun practicing with stamps. I’m not sure what to do with my practice pieces. Give them to my family for Christmas ? Sell them as one-offs? I’m just not sure! I wouldn’t sell them for much money, if I did — they’re mostly practice pieces and all wonderfully wonky… I’d let them go for pretty much enough to replace the clay. 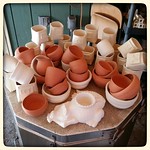 Another kiln firing in February was packed full of greenware, seen here as bisque after the firing. About half of these are practice pieces, about half are prototype mugs of a new slab-roll design (that I love, even if they’re a little smaller than I’d hoped). I hope to start glazing these in a few days. 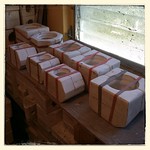 I made some time for slipcasting, which is the first time since last June. JUNE! What have I been doing?! Wednesday or so I poured three yarn cups and five yarn bowls, and earlier today I poured the same again — hopefully they’ll all turn out right (I’ve been having terrible luck with both lately) and I’ll be able to have them in stock in about four to six weeks. 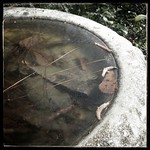 And here’s some proof that while I may not be suffering as much as the rest of you up North, Gainesville has been getting a little cold. My birdbath froze solid! Not just a bit of ice on the top… the entire thing froze. And it’s not much warmer in my house. Have I mentioned how my next house is going to have central heat, and not have jalousie windows? With those, you might as well leave the windows open!

I hope you’re all having a wonderful weekend! 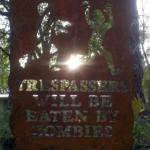