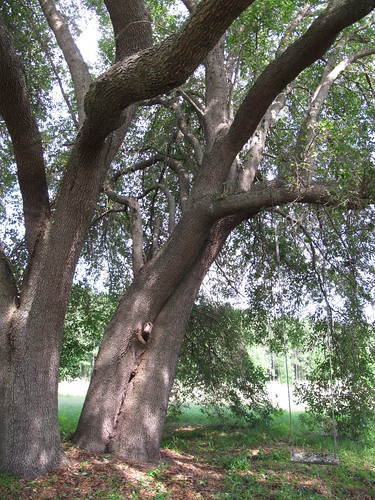 Even though it’s all I want to talk about – and trust me, my friends have figured that if they hold still long enough I *will* talk their ears off – I’m trying to be rather vague about things on the blog. The Readers Digest Condensed Story is that some friends of ours are moving soon, and we want to buy their place; their neighbors don’t know yet that they’re moving so we’re trying to keep everything on the down-low until they announce. But at the same time it’s all I’m thinking about. All Tim is thinking about. All either one of us can talk about with each other.

We’ve always wanted property — I think I might have said this in a previous post. But just like wanting to win the lottery but never buying a lottery ticket, we have never really started to move towards buying property. This feels like the kind of thing the universe is lining up once you admit you want it; yes, we’re saddened that our friends are moving far away. But what could be more convenient for them than having someone lined up to buy their land and house, which otherwise might spend weeks – but might spend months – being up for sale? And their land and house is offering almost everything we had mentioned to each other we want? We had always kind of imagined that whatever piece of property we bought would have a stream, or pond, or some sort of water on it… but really, in the grand scheme of everything else our friend’s place has to offer us, that’s negligible.

And I’m fully aware that anything can happen; of course we’re hoping for the best case scenario (they tell us a price that nobody wants to haggle over after which we easily get approved by a bank for a loan) but the worst might happen (the price is out of our range, and we wouldn’t lose friends over haggling, or we don’t get approved for a loan, or for some reason they decide not to sell after all). Anything can happen. But I have to live in a place in my head where it’s going to happen, because worry doesn’t do me any good, but planning does.

SO ANYWAY. Because I feel comfortable that their neighbors don’t know me (although I have met one family, years ago), I feel comfortable rambling on for a little with no specifics (and if you recognize any of these photos, please be vague in your comments, just because)…. It’s five acres, about a twenty minute drive outside of Gainesville, the house is a little bit smaller than our current house BUT it has a garage/workshop that is almost the same size as the house and it can be used for HaldeCraft, it’s got a lovely porch, is mostly clear-cut so there’s wonderful areas for gardens, and enough trees to block the sound of traffic. 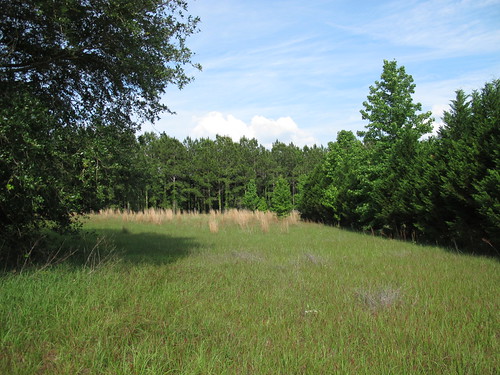 Like I said, most of the land is clear-cut. There are a few trees around the house, and a swath of trees at both the front and back end of the property, and this line of trees that also puts a small break between this property and the one just to the south. As I’m standing, I’m facing East, and the house and other outbuildings are off to my left. Can’t you just see the dogs running through this?! 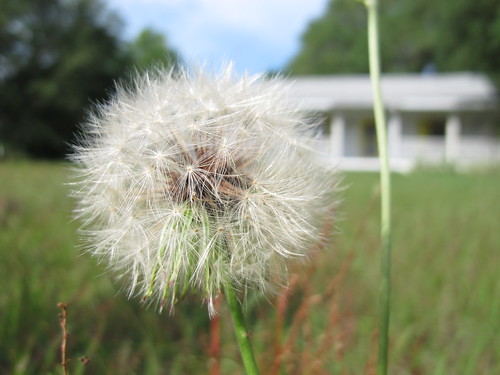 There are dandelions. And lots of other small wildflowers, most of them blue or pink. There are so many different grasses I couldn’t even tell you how many. I saw four, maybe five different kinds? The majority of the property is like a natural prairie, and we saw lots of butterflies. I hear there are rabbits. And of course, snakes, which we’d have to keep an eye out for because of the dogs. I’m sure there are turtles out there, too, and tons of different birds and owls. Our friends have never mentioned deer, but with all the horses that are out there that may scare the deer away…? I don’t know, I know next to nothing about horses other than my mother used to have a friend who had a Shetland Pony I would ride as a child, so when I got on my first Actual Big Horse it was also my last Actual Big Horse. I have a healthy respect for them, bordering on aversion/fear. 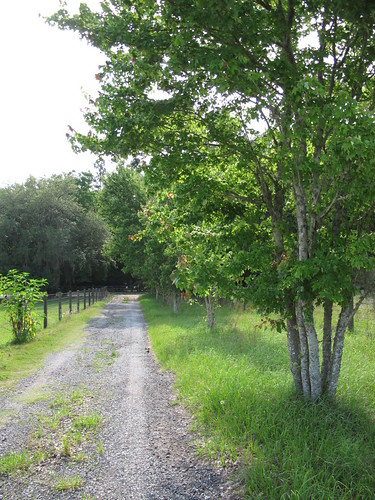 Do you recognize this driveway? Long time readers and real-life friends will remember a certain Cinco de Mayo where, hung over but sober, I had a little driving error at the end of this driveway. If we get the property, I’ll blog the story again — I’m certain the original was lost in one of my blog moves. And that’s as close as I’ll get to specifics about where this place is and who our friends are. Not that they don’t deserve mad loud props for being as awesome as they are! But I don’t know that they want us shouting from the rooftops about this just yet (I wouldn’t even be writing this post except that every time I sit down to blog, it’s the only thing I want to write about, and nothing else has been coming out… so I figure if I let this out, maybe I’ll finally want to talk about Other Things?!).

We’d want to put in some fruit trees, but we’re not sure if we’d add them into the line of trees already along the drive, or put them along the back of the property near where the line of pine trees are (near the photo above of the grass and trees).

In fact, Tim having a big garden is one of the reasons why we want property. He does so much cooking, so growing a majority of the food he cooks is a natural extension of that. He wants to garden the same way my father gardened – yet another reason, Daddy, I wish that you were still here… the books you told me to buy and the handwritten notes about gardening that I’ve found from you are helpful, but I wish you were here to talk to. So he’s been reading a lot about sustainable farming, crop rotation, what goes well with what… like my father, he’s fascinated by the science of gardening; what plants improve the soil, what can be planted after something else the next season to improve the quality of plant and soil, how gardens can best be designed for both ease of gardener and fruitfulness. 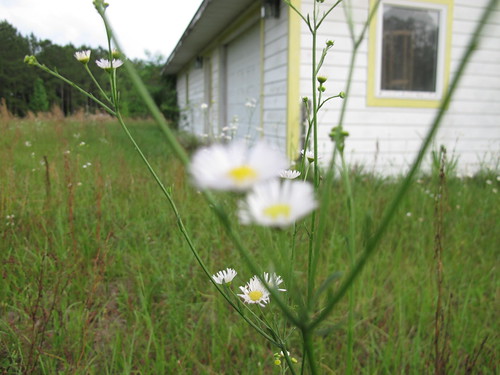 There’s a workshop. Technically a garage/workshop, but our friends don’t use it as a garage and we’re not planning on it either. It’s unfinished on the inside, but does have electricity and water run to it; we’d need to install a sink (hopefully also a bathroom, if we can figure out the plumbing on that), insulate, hang drywall, and figure out what to do with the floor (leave it as-is, concrete, for easy cleanup? Or laminate for ease of standing?). Then that would be HaldeCraft Headquarters. If this happens, expect more pictures and updates than you probably think are necessary. 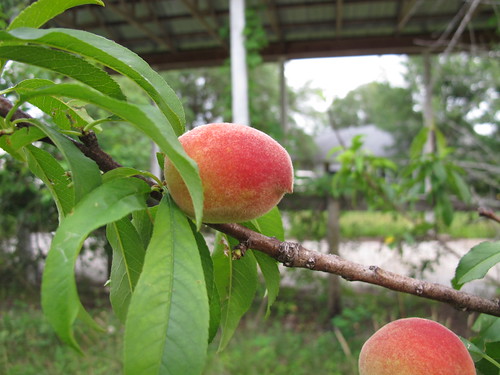 There are some fruit trees on the property. They’re old and gnarled and unfortunately right where Tim wants to put his garden, so they’ll probably get dug up, but like I said earlier, we’ll plant new ones. I definitely want loquats, and oranges and tangerines. Grapefruit. I didn’t even think about peaches until I saw these… so now I’m also thinking peaches, nectarines, and Tim has mentioned apples, but we had apples on the farm I used to live on and they never did very well in the heat. I also want blackberries – yes, I know, those aren’t trees – but every time Tim mentions gardening I’m all, “AND BLACKBERRIES.” Which I can eat off the bush until I’m sick, and then after I’m sick, I’m all, “hey, more room for blackberries!”. 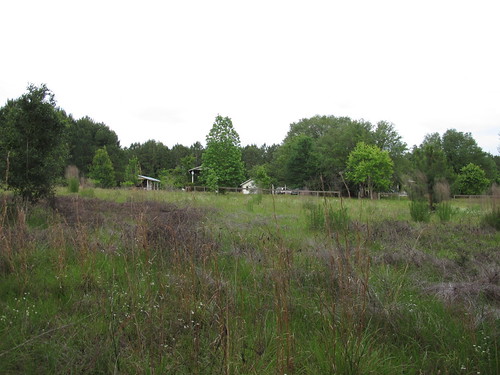 There’s a lovely large space for a garden. There’s a horse paddock, fenced in, and since neither one of us want horses (I’m afraid of them, and Tim has had them before when he lived in North Carolina, and nothing teaches you about what you don’t want on a property like having had those things before). At first we were thinking that the fenced in paddock (about an acre) would be great for the dogs, but we’d still have to put them on a leash to walk them from the house to the paddock, which kind of cancels out the ease of just opening the back door and letting them out… so now we’re thinking rather than the fence keeping the dogs IN, how about the already-there fence keeping the dogs OUT? We’d have to eventually put fence close to the house anyway, because neither one of us wants to put the leash on the dogs six times a day to let them out (and let’s face it, since I work at home, who would most of that fall upon?). So why not just do that, and then use the horse paddock as the garden? Yes, there’s already a good-sized garden out there, that our friends have even already run irrigation to… but maybe that could be the orchard. Ah, dreams. 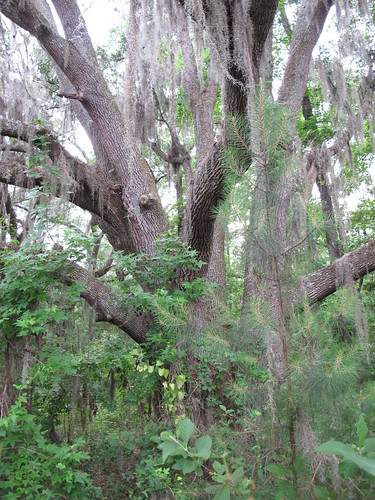 There’s another big ol’ grandfather tree on the property. I love how the rest of the property looks so open, and then there’s one corner with this tree in it, and lots of other trees around — there’s so much Spanish Moss that if I didn’t know I took this photo out there, I’d think I had taken it in some swampland. I do love old trees, and I hear that the area of the property this tree is in is also home to a lot of birds.

That’s what’s going on, mostly. We’re waiting to find out what the price is, so that we will either – hopefully – start working on bank approval or quit dreaming. Well, we wouldn’t quit dreaming… we’ve committed to moving, by the end of this year (knock on wood) and I’ve been combing through Zillow finding other pieces of land comparable to this one that should the price on this be too high, we have alternatives. The problem with that….? None of what I’m finding is exactly a perfect fit, like this one is. A few people have said “well if it doesn’t work out, that just means there’s something even more perfect coming your way”… but I have to tell you – and I should do a whole ‘nother post on this – some of the properties for sale out there, they’d have to pay me to take.

So. Keep your fingers crossed, think happy thoughts, and check your tents for holes because moving my ass out of this house I’ve been in for 19 years is going to be a feat of engineering that will take at least one weekend, and we’d love to have a huge-ass tired-old-person party at the end of it. Knock on wood.