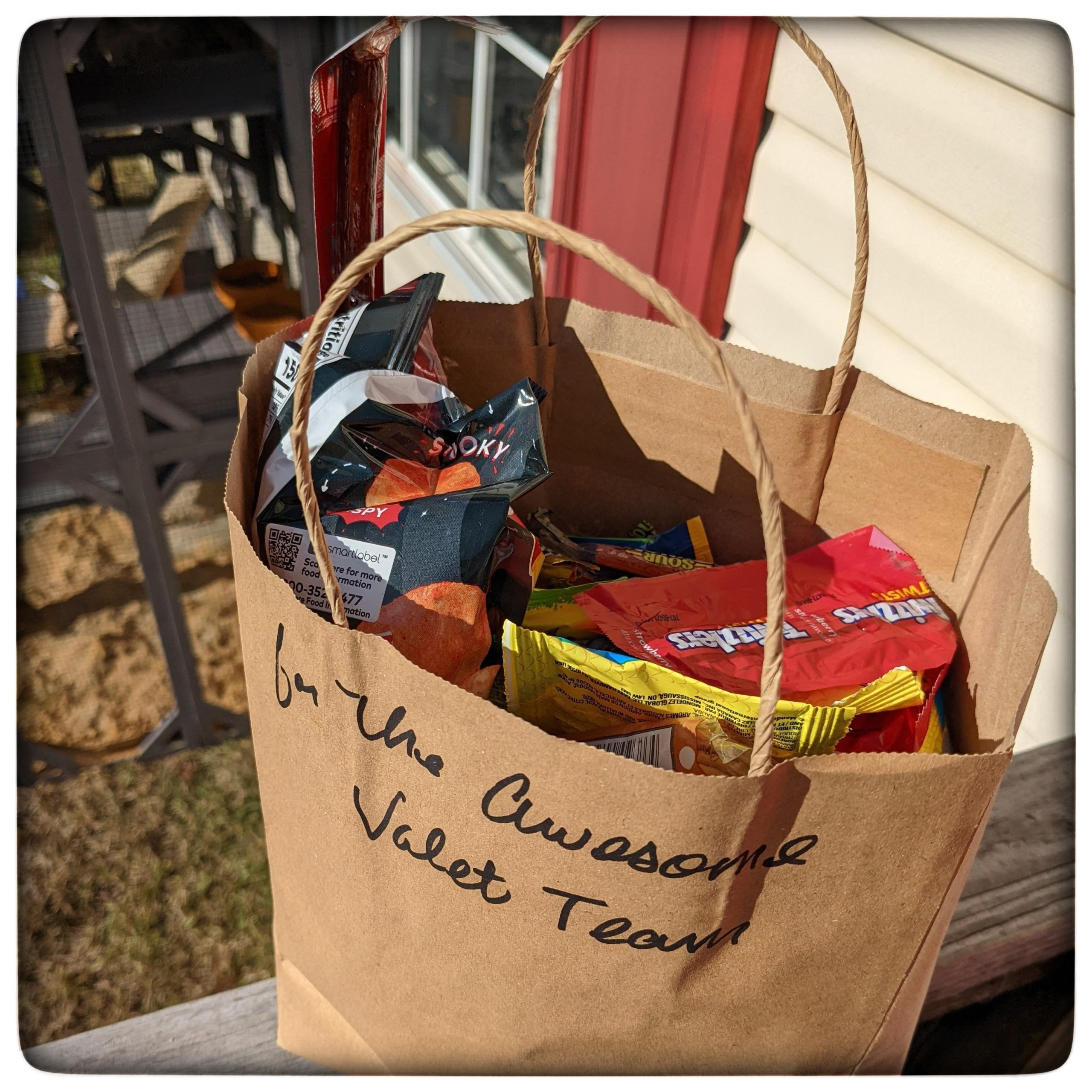 I wish I could say “this was the worst day” but so many days were “the worst.” I’m going to start off with what I posted on Caring Bridge later in the day, but I’m going to end with a string of texts that I sent to Tim’s brother, Billy. I’ll add those at the end in case anyone needs to skip them. 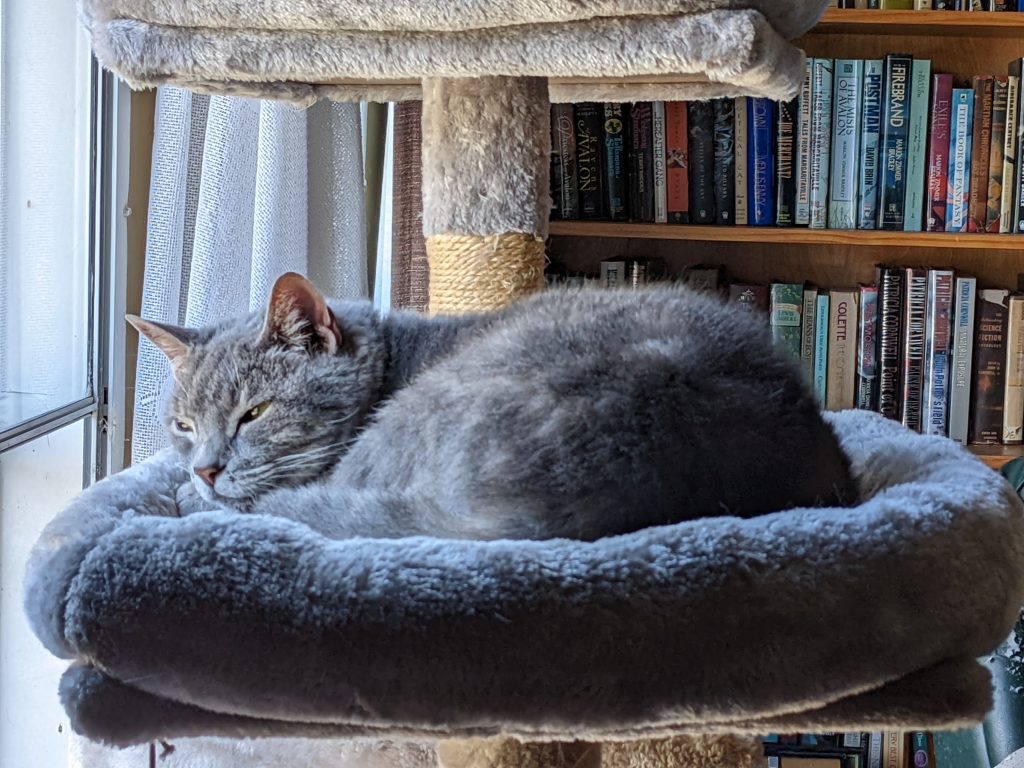 Theodosia writes me a letter every day
I’m keeping the bed warm while her husband is away
He’s on the British side in Georgia
He’s trying to keep the colonies inline
But he can keep all of Georgia
Theodosia, she’s mine

Well, Tim gave us quite a scare this morning. Nurse Emmanuel (we love him, he’s the one who worked on the Neuro ward in Puerto Rico for years) was in his room about 9 AM, fussing over tubes and whatnot, and Tim’s blood pressure (which has been low a lot lately) went down rapidly. Emmanuel was right there, though, and was on it. From start (“I see his blood pressure dropping”) to CPR, multiple doctors in the room, resuscitation, and stabilization, it was maybe five minutes, tops.

I was in line for valet parking when they called me about this. The nurse was very calm, which I guess should have been a sign to me about how serious it was. She called it a “small cardiac event.” Weeks later, I was having lunch with my Goddessdaughters, and they were like “small cardiac event? Is that what you told people on Facebook? Did anyone BELIEVE you? There’s no such thing as a SMALL cardiac event!”

I asked what I should do, come up to 5 or go to the floor they said they were taking him, and she said since I was so close, to come up there. I did. It was chaos. What felt like half the staff was in and out of his room. Doctors tag-teamed, two staying with him and one coming out to talk to me, a couple of times. Nurses tag-teamed, three of them in the room with Tim and the doctors, three out with me. One would stay directly with me, making sure I was ok, one would go back and forth between us and the doctors, one was gathering up Tim’s belongings and bringing them out to me in the hallway. They didn’t tell me NOT to go in the room, but the room was so small and there was so much going on in there, I knew I’d be in the way. I stood out in the hallway, answered questions and listened to what people were saying to me, and texted back and forth with Tim’s brother, Billy. 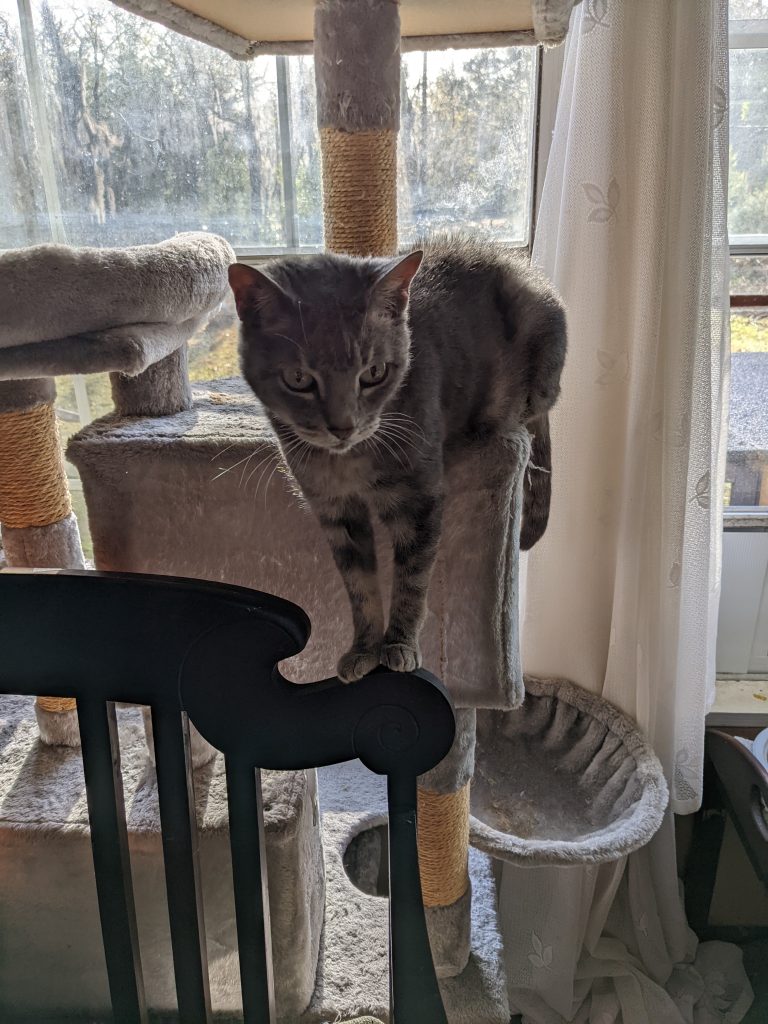 They’ve moved him upstairs in the same tower, to the Medical ICU, but will be consulting with Dr. Jeng to see if Tim should be moved back to the Cardiac ICU across the street.

Such a simple sentence, “they’ve moved him upstairs.” Y’all. It was chaos. It was like a scene from sweeps week on ER. For some reason, Tim wouldn’t stop bleeding. He wasn’t clotting at all. So there was, and I wish I was making this up, a nurse sitting on top of him on the gurney, holding a spot on each leg where they’d tried to put in a central line and couldn’t. He’d already bled through the bandages and she was holding towels down on him. Two doctors and two nurses, one of each at each end of the gurney. Me, carrying about four bags of things. We tried to take the large, meant-for-gurneys elevator, but it was slow, so we crammed into the regular elevator, all of us just fitting. Everyone tried to put themselves between Tim and I, angled so that I could see his face but couldn’t see, or didn’t have to see, the nurse sitting on him, trying not to let him bleed out.

Then I sat in the waiting room for a few hours. Becca and Jenn came and sat with me, and I decided after a few hours to just … go home. I felt so … defeated. But there wasn’t anything I could do. 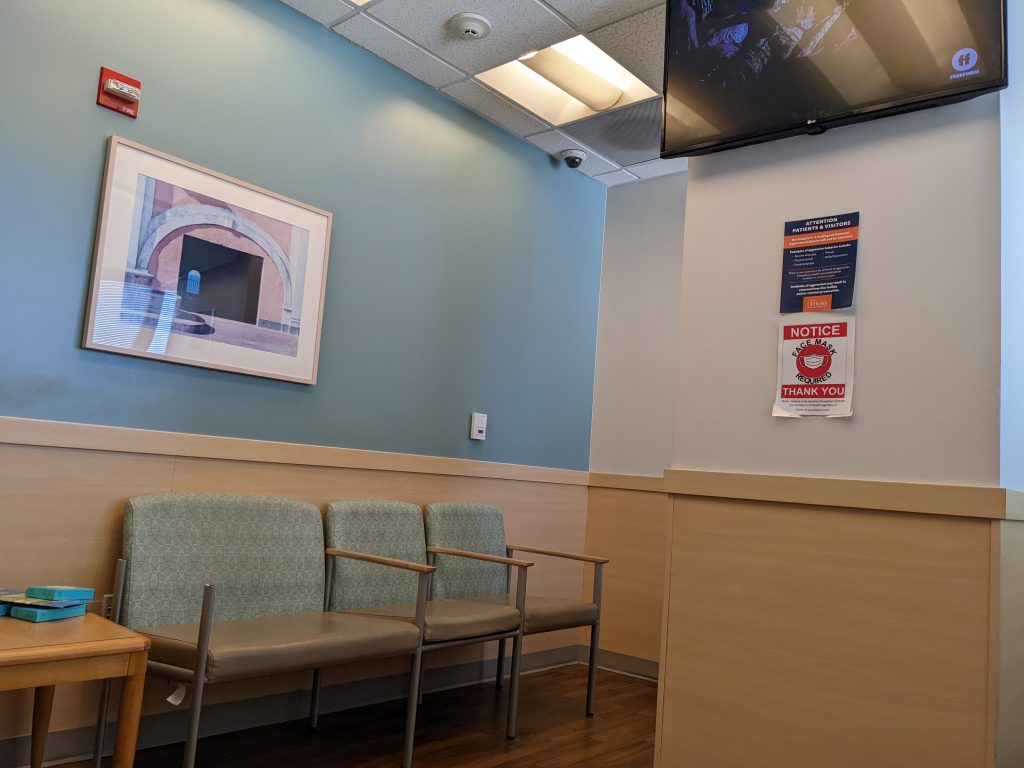 I’ve gone ahead and come home, and I feel…. really weird about that. But they won’t let me in until they get his Covid tests results back and those are taking up to 8-10 hours — visiting hours there stop at 8. But they start at 6 AM so I’m going to be there hella early tomorrow morning. I’m hoping that if I take care of myself this afternoon, and try to sleep tonight, then tomorrow I can come in fresh and fighting. 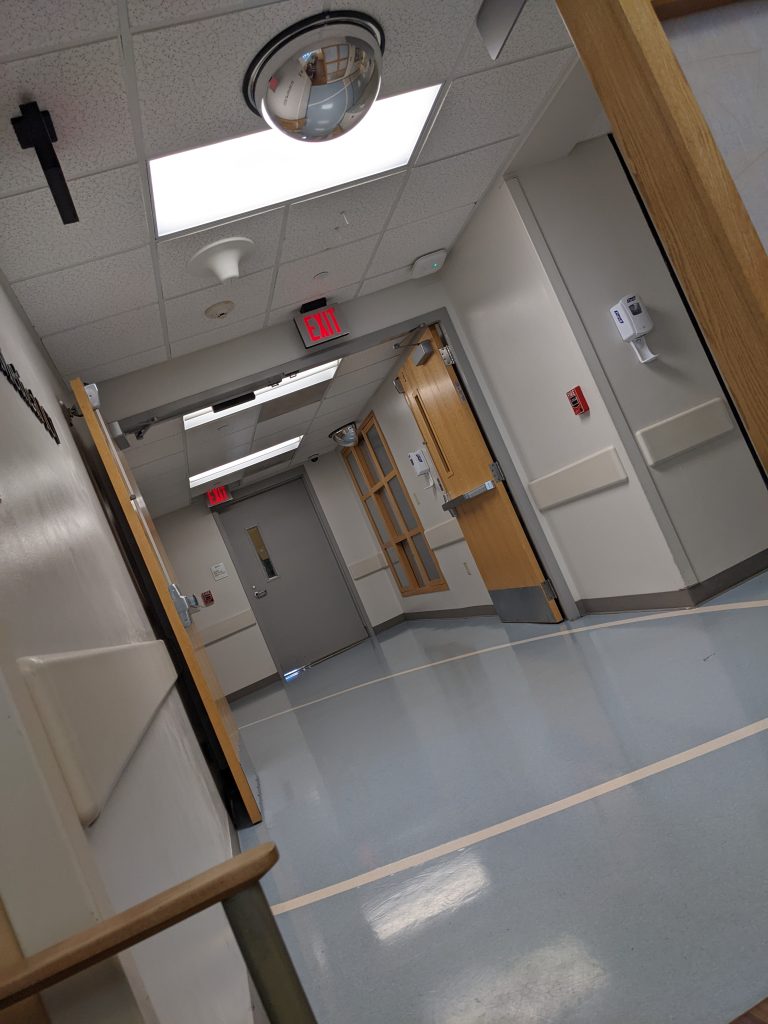 None of this is great, BUT, the doctor is hopeful. He has seen before, that chest tubes can get blocked by gunk, air can build up and put too much pressure on the heart and it will stop — because of the amount of gunk that came shooting out of the chest tube when they started compressions, the doctor is reasonably certain that THAT was the reason and not that Tim’s heart is inherently failing. Still, he wants to consult with Jeng and run many more tests before he gives me a answer we can put money on.

I have access to Tim’s health records via an app UF uses, so I’ll see his test results as soon as they come in – sometimes that’s even before the nurse sees them. And of course they will call me if anything happens, and also if they move him back across the street to CICU, they will call me to let me know. Looking at the results of his most recent chest scan, that came in while I was driving home, I’m encouraged.) 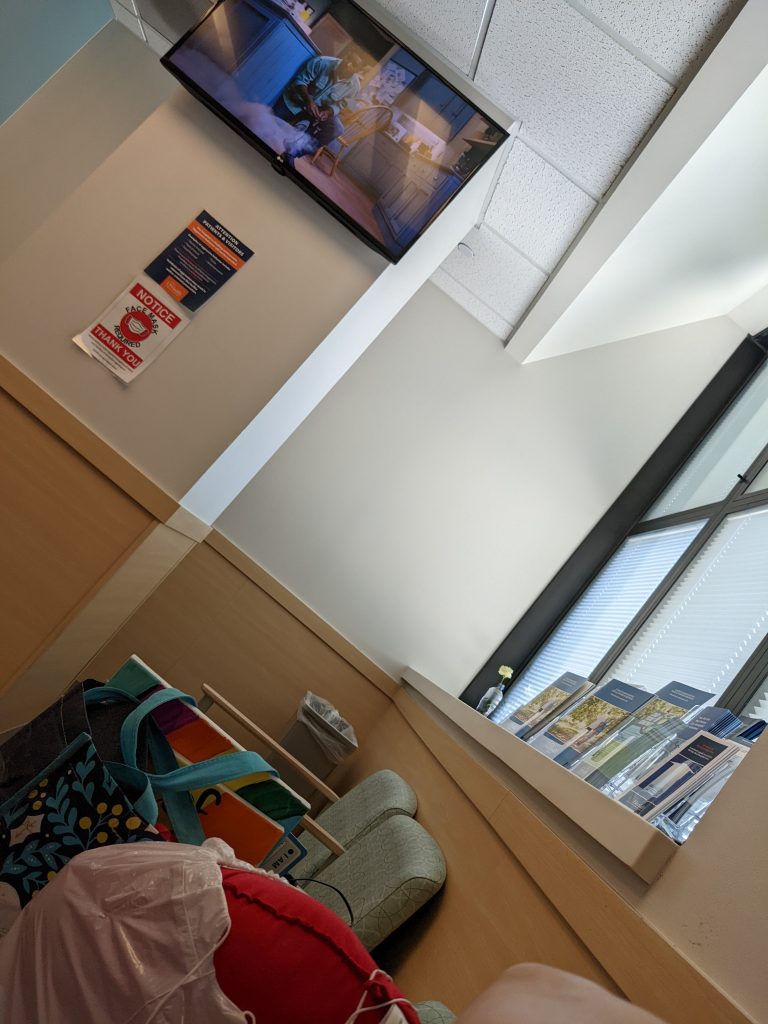 Hamilton faces an endless uphill climb
(Climb, climb, climb)
He has something to prove
He has nothing to lose
(Lose, lose, lose, lose)
Hamilton’s pace is relentless
He wastes no time
(Time, time, time)
What is it like in his shoes?

I don’t know what else to say other than I love you all, and I’m hoping that the simplest answer (too much air in his chest) is the real answer. I will of course update tomorrow when I know more. Thank you, Becca, for coming to sit with me in the waiting room, and thank you, my sweet Jennling, for taking the rest of the day off to come out here and stare at me later.

ps — one of the valet attendants started to cry this morning when I handed her the bag of goodies. <3 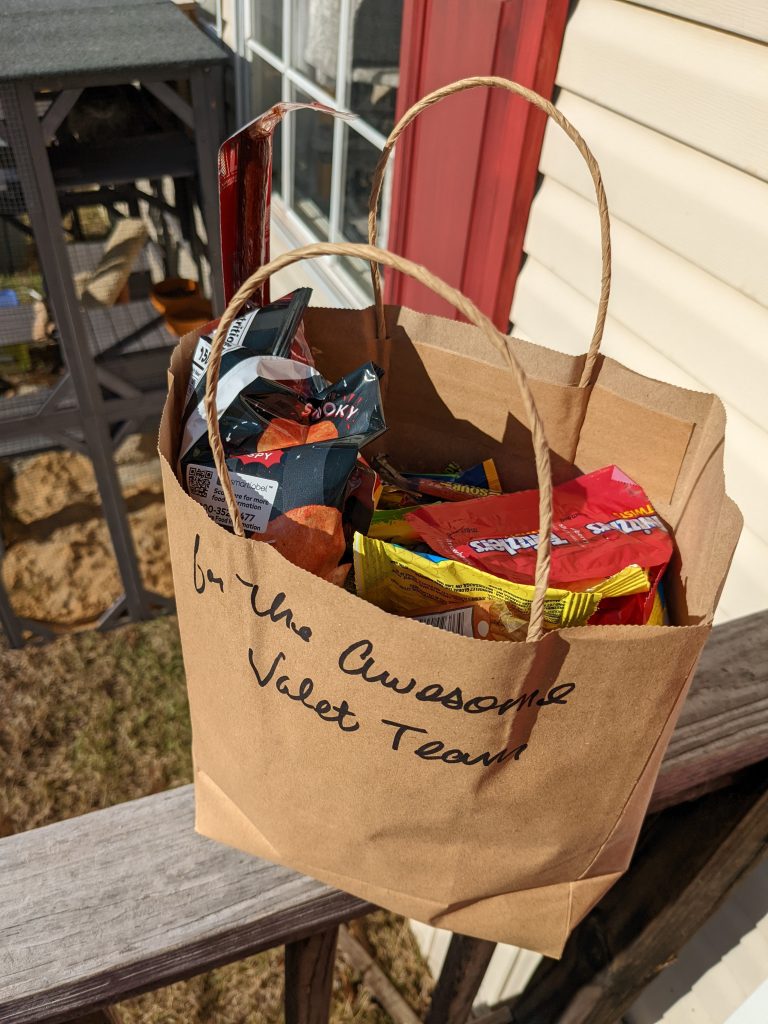 Now. Here are a string of texts that I sent to Billy that day while everything was happening. Billy, again, is a paramedic, and on the worst medical days acted as my go-between, between me and the chaos at the hospital, and the rest of Tim’s family. Again, I can never thank him enough for that. I’ve mostly edited his comments out, so this is all from me. Feel free to stop reading now if you can’t handle fear and panic at the moment.

Hey, texting you only for a sec, not the whole fam. Things aren’t good down here. Moving us to ICU. I will text more when I know more.

They’re putting in a new central line before moving him

He had a cardiac event this morning, maybe 45 minutes ago.

They were able to rescussite him, I’m probably spelling that wrong

So doctor says best case scenario the heart stoppage was because the chest tube (from pneumothorax) was blocked, he’s seen it happen

I’m the only one losing it, haha. All the nurse’s are very calm, everyone reassuring me he’ll be OK.

Let me know what tickets you find, I’ll try to arrange a driver for you! All my friends want to help.

Of course this is happening on your dad’s birthday

(then billy says “Sometimes if the chest tube is blocked air backs up in the chest and presses against the heart. As the pressure releases, everything can start up again. They should have seen signs though. “)

I brought it to their attention, nobody seemed concerned

Right now it’s MICU, same tower as Select. New doc is going to call on Jeng, see if we need to move back to 77

They said subcutaneous air was nothing to worry about

So they’re not going to let me back in the room for hours, if today at all. Because of the heparin, he’s bleeding a lot and they don’t want to let me in until they can clean him up, and they can’t clean him up until he stops bleeding. Also they need Covid test results and those are taking up to 8 hours

They are still trying to get with Dr Jeng to see if we should move him back to CICU.

I will probably go home, I guess? I don’t want to sit in the waiting room and then be told at 9 pm that I can’t go in. But visiting hours start at 6 am so I can get here stupid early in the morning. And they have my phone number and will call me either if anything else comes up, or if they move him back to CICU.

Lyrics by Lin-Manuel Miranda
Wait for It 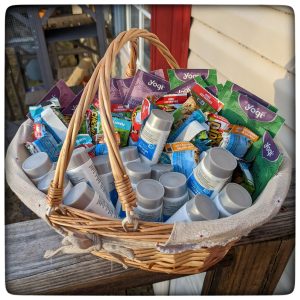 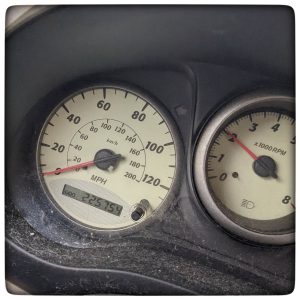