Need to catch up? I had a lot of tooth and jaw pain and discovered I needed an extraction of a broken tooth, which my dentist’s office couldn’t do until January.

I KNOW, RIGHT?! My dentist at the Faculty Practice portion of the UF College of Dentistry is a lovely, patient, kind, wonderful, caring person. But she only works one day a week (teaches the other days) and also do to my level of anxiety wanted to recommend me to the oral surgery department, and she flagged my appointment needs as “emergency” and sent me on my way with antibiotics to kill the infection from the broken tooth (the abscess had receded since bursting but was still there… not getting any larger again, but still there. Only antibiotics would get rid of the last of it.).

So on Wednesday morning (after my Monday appointment) I still hadn’t heard back from the oral surgery department so I called them. They didn’t have a record of my appointment needs yet but said that sometimes it can take a week or two to get recommendations sent over from the other building. Not that they had anything open until January, anyway. I have to admit, I did start crying on the phone! Was I supposed to live in this pain until January? Because fuck no! Here I had been worried that I wouldn’t be able to get the tooth pulled before going to a science fiction convention the weekend of October 10/11, I was worried I’d be in pain the whole weekend and not enjoy myself — or equally as bad, that they’d tell me the only thing they had open was Friday the 9th, the day we were leaving for the con. HAHAHAHAH. Nothing to worry about there! As Tim said later, “at least you don’t have to worry about getting it pulled right before con!”. Uhm… thanks?

Anyway, they recommended I call the front desk of the Faculty Practice back. I did, and – this is my favorite part – they recommended a walk-in clinic they also operate, run by students, that takes people on a first-come, first serve basis. HAHAHAHAHAHAHAHAHAH HAVE YOU MET ME? I need drugs to go to A CLEANING. Do you think I would mentally survive a walk-in clinic, hours of waiting, to have my tooth pulled BY A STUDENT? ALL THE NOPES. Seriously, insert that one GIF of the badger going “Nope, Nope, NOPE, ALL THE NOPES, FUCK THIS SHIT, I’M OUTTA HERE” and jumping over the cliff.

And I did what every self-respecting, in-pain, afraid-of-dentists person would do, and I mentally shut down for the rest of the day and I forget now but I may have just sat on the couch and watched TV and knit for the rest of the day. Or gone to make ceramics over in the studio or something. Whatever it was, it wasn’t thinking about my tooth drama.

The next day, I got on The Google to find someone else in Gainesville who could get my teeth pulled. I started off on Facebook, probably the single time the Gainesville Word of Mouth group has been helpful, and found posts left there about great caring dentists who take emergency cases, and I Googled those offices and looked at their websites, staff photos, any reviews I could find, and tried to get a general sense of who to call. I narrowed it down to two… one of them, it looked like, was either on sabbatical or in the process of moving, so I called Robin Larson, DMD, and got The Nicest Lady In the World on the phone. She was horrified my current dentist couldn’t get me in for an extraction until January, empathized with my fear of anything dental related, got me in for a consult as soon as they had an opening (the following Monday) as they had to give me a consult before they could prescribe drugs to relax me during the extraction, called me “hon” about sixty times, encouraged me to keep taking my antibiotics and talked to me about which OTC pain medications were the best, and was just generally very reassuring and kind.

Monday (this is the 5th, for those with a calendar handy) I went in for a consult, where I was greeted at the door by a therapy dog! THEY HAVE A THERAPY DOG! He is a big black Chow mix named Gus and he looked like a shorter, fatter Bridgett, so I immediately felt more relaxed. Even though during the consult I cried for most of it, because the abscess had gone down enough that a cursory look into my mouth didn’t show anything out of the ordinary – this was a hairline fracture, remember, so didn’t look like anything to the naked eye and unless you touched it to wiggle it, just looked like a regular tooth. So I had to start at the beginning with “please don’t do what my old dentist did and tell me this is all in my head because a;djfa;dlkjfa;djf” and it took all of about three seconds for the woman evaluating me to believe me — she may even have rolled her eyes at my “all in my head” story that she saw the inside of her brain. She brought in the dentist who would be doing the extraction just to double-check that it would be an extraction and not a root canal, and yes, it would be an extraction. They gave me a prescription for Xanax and told me to start taking them that night, and that they’d see me tomorrow.

The next day, Tuesday the 6th, I went in for the extraction. It was a three-hour, four-Xanax event (if you count the one I took the night before, the one I took that morning, the one I took an hour before the appointment, and the one I took during the appointment) but it went very easily and they even gave me a lovely box in which to keep my broken tooth — for it was definitely broken; split all the way from front to back, right down the middle, complete with necrotic root. No wonder I was in pain and my mouth tasted horrible. 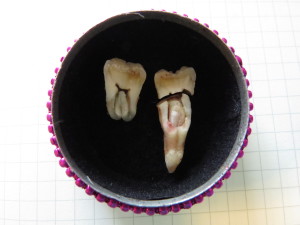 The larger half of the tooth broke while being extracted.

But wait! There’s more! During all of this, of course they had taken X-rays of my mouth. “That one tooth looks horrible,” I said. “Is that my broken one?”…. No, they said, it was the one I’d gotten a root canal on a few years ago. That’s weird, they added. Whoever did this just.. bonded the broken parts back together. They didn’t … give me a crown. The dentist was surprised it wasn’t that tooth that was broken, because apparently bonds are meant as a temporary fix. So, guess who was going to have to come back, unless she wanted to risk another broken tooth, for a crown on a years-old root canal? HAHAHAHAHA.

Good lord, I really thought this post would finish the story. But wait! There’s more! I’ll finish on Thursday!