Mostly this is cross-posted from my work blog, with a little something extra personal tacked on at the end, because this is my personal blog. 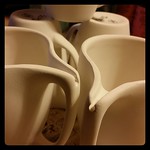 When I first started looking over last week, I didn’t think there was too much I could show anyone – it feels like most of my week was spent at super-secret dye pots, and at the computer working on things (I spared you a photo of me doing quarterly sales tax… you’re welcome). But in looking over my photos for the week, I do have some things to show! Even if most of them are teasers… like these mugs. Many of you who saw this earlier in the week guessed correctly; the grooves and cutout in the handle is to hold a teabag from falling into your cup of water. I’ve glazed these and they’re in the kiln now, and I’ll have them up when I finish glazing a few more things and can fire. I didn’t make too many of the because I wasn’t sure if there’s a call for them — after all, I do already offer about 50 or so mugs… but I just fell in love with the idea and had to make a few. 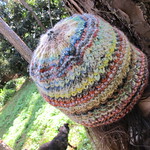 If you’re a yarnie, have you looked into the joint 15-in-2015 I’m doing with String Theory Colorworks? You can read about it here on Ravelry. I finished my first project, a handspun hat. I didn’t use all the handspun, though, and I’m already making another one with the leftovers. And I have my eye on two more skeins of handspun, because y’all, this pattern is like popcorn. I CAN’T MAKE JUST ONE. 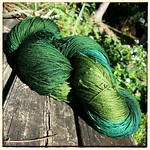 I had lunch with my sister-in-law “Ranger Amy” this week, who some of you old timers may know from her old blog, Through the Eyes of a Park Ranger. Amy and her husband are expecting their first child soon, which means I am in full baby-knitting mode… but neither Amy nor her husband are into the main choices of pink and blue. But! Waaaaaaaaaaaaaay back when I was dyeing the club color Yggdrasil, the test skein didn’t come out exactly like what I wanted for that color, but I thought I might be able to use it in the future. I can, for Ranger Amy’s upcoming Ranger Baby – hence the name of the new colorway I’ll be listing next week. Amy is an amazing photographer, by the way, and has recently begun selling some of her work — you can see her stuff here. 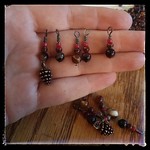 I mentioned in my yearly review that while I liked making stitch markers (and they’re definitely something many of you have mentioned wanting), I wasn’t happy with making them from Fimo clay… so I fell down in the Fire Mountain Gems website, and am working hard on my wire-rapping (and headpin length guestamating) skills. Expect to reap the benefits of this later in the spring. 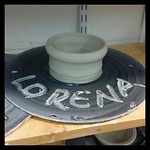 Wednesday night I started a six-week ceramic throwing class. OK, here’s the funny thing — I grew up a slipcaster, and never wanted to throw. I didn’t think there was anything I couldn’t get from slipcasting, and besides, all the people I knew who threw had kickwheels and bad knees. I honestly didn’t know – and you can laugh at me, go ahead – they have these things called ELECTRIC WHEELS. One thing that I want to make that I’m just not able to do what I want to with slipcasting… are yarn bowls. I’m going to need to throw them. So I’m taking a class… and I love it. I’ve been looking up prices for and reading reviews on wheels, and I’ve got my eye on a Brent Model C, which is going to run me about $1200… plus about another $200 for a good ergonomic stool (for the hours I plan on spending in front of it)… and then of course a run to Ocala for a few hundred pounds of clay…. all in all I’m looking at about $1500. I’m wondering what my chances would be for doing a Kickstarter campaign (“Kickstart my electric kickwheel!”) would be. You know, considering that the things I’d offer for incentives would be things like “$50 for a yarn bowl I don’t know how to make yet but I promise won’t look like I had palsy when I made it!”… uh, yeah. Maybe I should keep my eye on Craigslist, instead, to see if anyone is unloading one any time soon. (I try to keep home money separate from work money, but you totally know that if we get the house, I’m going to ask Tim if I can be fronted the money from our home account to get a wheel out of happiness for my new studio. Or, you know, out of sadness, as a make-up gift for not getting the house, if we don’t. Either way, however way, I’m getting a wheel, and I’ll pay it back after I start making yarn bowls that don’t look like they were thrown by a blind one-handed drunk.) 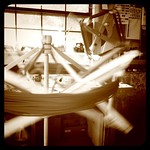 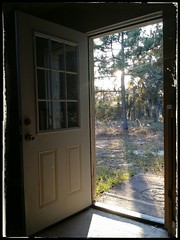 And in between all of that, I did a lot of staring at the wall. “We’ll let you know tomorrow” must mean something different to the lending company than it does to me. And is that… good? Bad? Nothing? Are they not telling us because it’s no, and they’re not even going to bother? Are they not telling us because some of the rules for lending changed at the beginning of January of this year, and so they’re trying again from the beginning, using the new rules? Does that mean yes? Does it mean a strong maybe? I DON’T KNOW WHAT TO FEEL AND I’M FEELING ALL THE FEELS. And I’m tired of feeling everything. I just want to live my life, and I’d like it if my life didn’t constantly include dreaming about moving. I either want it to happen or to be off the table. I feel like I’m trapped in a Howard Jones song — “You can see the summit but you can’t reach it/It’s the last piece of the puzzle but you just can’t make it fit/Doctor says you’re cured but you still feel the pain/Aspirations in the clouds but your hopes go down the drain”. Except I’m not giving up hope… it’s just living side by side in my heart with utter uncertainty. And it sure is getting crowded in there, along with aspirations of throwing clay and desire to do a good job with HaldeCraft. Gah.

So. That was my week. How was yours?