This week is crazy, with trying to wrap up a bunch

This One Hit Wonder is in the Joy base (https://ww

... got a little sumptin' in the works for a local

Fresh pretties, out of the kiln! 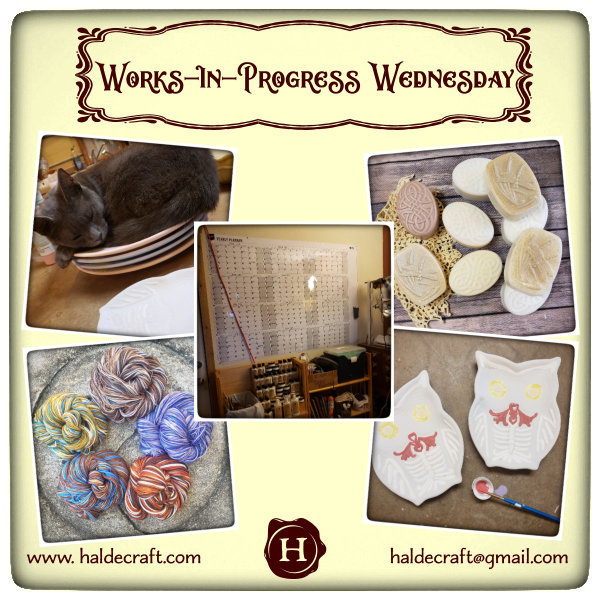 I’m in that headspace where I think it’s Tuesday, but I also think it might be Thursday, so I keep checking the calendar and am like, no, wait, it’s Wednesday! Time for my WiP post! Here’s what’s going on in the studio this week…

In ceramics, I have so much detail painting work to do that I think I understand why my right arm is bothering me! Constant squeezing of the paint tubes I’m using to get the thin lines has exacerbated the low-level tennis elbow I’m always prone to anyway because of my knitting. Artist down, y’all! Artist down! Well, not really – I don’t have time to rest and elevation. I do have time for ice and compression, though, and I’ll just have to rest … I don’t know, mid-December or so?

In soap, the humidity we had the first couple of weeks of November really wrecked havoc with my soap-making plans. So did an issue with my studio AC; I thought it had blown the compressor (expensive, but not as expensive as an entire new unit) but it turned out to be just a blown capacitor and some burnt wires. Easy replacement, and now I can run the AC again, which will keep the humidity inside the studio down enough to make soap. In a twist, though, it’s actually cool enough today to warrant the heater instead! Hey, it was like 60 when I got over here this morning, that’s sub-freezing for Florida.

In yarn, all that humidity didn’t let the yarn I dyed dry very quickly. Now I’m working on some ceramic custom orders so don’t have time to wind it even though it’s dry enough… so I’m looking at the new colorway (another John Prine tribute) being released a few days after Thanksgiving rather than by the end of this week. Oh! And there are some new One Hit Wonders this week, and I’ll have another round starting the Monday after Thanksgiving.

In Patreon, I’m catching up on the Hanks posts, catching up on the chapters, and sending out Patreon tier benefits! It’s a busy week for Patreon!
In knitting. I should probably give my arm a rest and not knit, but I do get a few rows done every night on that log cabin blanket. It’s about 200+ stitches per row at this point, so slow going with an arm that hurts when I use it. But two rows is better than no rows, right?

In other things, the big news around here is that there is an applicant for another Shop Cat position, one that I didn’t even know I was hiring for. Director of … New Acquisitions, maybe? A few weeks ago I saw a gray fluffy cat starting to hang around, and in the last few days she’s become friendly enough to eat lots of food, get lots of pets, and for me to figure out that she is mighty pregnant. It’s been a long time since I’ve had a pregnant cat (seriously, it’s been about 25 years, at least) but I’m up to be Kitty Douala if she decides to stick around (which, we might have already given her a name? So I hope she sticks around?). I’d love to get her inside, but she doesn’t seem to trust “indoors”… she has consented to hang out in our open garage area, though, so I’m seeing where she likes to sleep and I’m trying to put things there that would make a good safe nest for her to have her babies. I really, really do not want her to have them out in the woods. After she has the babies, we’ll make sure everyone gets good vet care, and I’ve already had a few Facebook friends say that they’re interested in kittens (especially if they are as adorable as Tulip, who is just the sweetest Little Miss I’ve ever seen!).

That’s about it for me this week. I’ve been feeling a lot of pressure to make plans for HaldeCraft for next year – you know, yearly review, what worked in 2020 and what didn’t, what can I do better… and I’m like, you know what? 2020 was a straight up dumpster fire of a year. The fact that I did not have to close HaldeCraft and go work at Instacart or something is a miracle — I spent most of the year completely playing it by ear and leaning into whatever was working and backing off of what wasn’t. I think the only thing I planned out this time last year that I stuck with was a new yarn colorway every month… and even that has been a bit of a time challenge the last month or two. So while I’m being bombarded with “now is a great time to send newsletters to everyone telling them all the awesome things you have planned for next year” I think I’ll just more say to y’all … “We are almost ready to kick 2020 to the curb. I could not have gotten through this year without y’all, and I hope that I helped some of you in some small way. Let’s continue to do that for each other next year!”