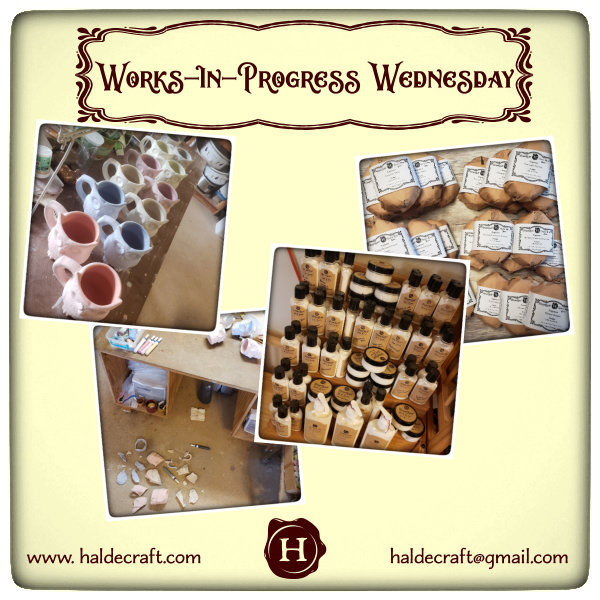 I’m catching up on a lot of things this week. Not getting ahead, mind you, but catching up! And I’m heading out of town tomorrow morning — I’ll be bringing some writing work with me, and of course I’ll have access to email and social media, but I won’t be in the studio so anything ordered after about late this afternoon will have to go out Monday.

In ceramics, I’m recovering from Socks breaking a bunch of hard work. I’m trying to shrug it off – everyone’s a critic – and focus on more, better work. I have a lot of bisque pieces in the Colorful Collection that I’ve been wanting to work on this summer for an October release, but the WTF mugs have kept me jumping so I’m just now getting started on all that. Hopefully come the first week of October, I’ll have some awesome new things to show off! I’m trying to look at it like… whatever Socks breaks, that frees up my time to work on the next thing on my list.

In soap, feedback has been coming in on the first of the six tester fragrances (Acorn Harvest, Ambered Tobacco Leaf, Cabin in the Mountains, Cucumber Mint, Dandelion Pear, Mountain Waters). Cucumber Mint is a clear winner, so I’ll definitely be bringing that in. Anyone have any comments on any of the rest? Drop me a line, send up a bat signal, whatever! I figured I’d give it a good three or four weeks before making final decisions, and order fragrances around the end of September. So you have a couple of weeks to use the soap and let me know what you love!

In yarn, even though I’ll be out of town Friday, I’m still going to list the new yarn, Broken Hearts & Dirty Windows. It’s all dyed and wound up and ready for forever homes, it’s just waiting to be listed!

In HaldeCrate… still no ideas for the Snow Flurries crate, and I’m starting to side-eye my brain like, hey, come on. You give me a thousand ideas every day and most of them are garbage, and you can’t give me anything THIS ONE TIME??? I have to be honest… I’m kind of thinking of skipping this Crate, even though I’ve previously committed to producing something. This year is so up in the air, and I’m already behind in so many things, do I really want to give myself a deadline right now when I don’t even have any concrete ideas about what to make before that deadline? All I have is a yarn idea… something in the Gingerbread House family. Maybe I should just do a limited yarn colorway that month, and skip the Snow Flurries ceramics for right now.

In Patreon, we hit a new tier level, so I put feelers out about what people wanted, and when the votes were tallied, an online hangout won out. Then I lost a couple of people, which put us all back down one tier, but we had so much fun at the one Google Hangout we did at the beginning of September, I’m going to keep it going. So the next one is Friday, October 2nd, at 4:30 PM Florida time – if you’re a patron, I’ll be sending you an email with a link to the Hangout in the next couple of weeks!

In knitting, I do NOT need to feel like I want to knit an afghan for a friend, because I can barely finish the socks I’m working on.

That’s about it for me right now. Like I said above, I’m heading out for a couple of days. When I get back there will be, hopefully, two back-to-back kiln firings, depending on how fast I can get some things glazed. Oh, hey! Do I owe you a custom order? I think I have three outstanding ceramic orders and two soap orders – if you suspect I might have forgotten about you, drop me a line! And have a good rest of your week, y’all. See you soon!