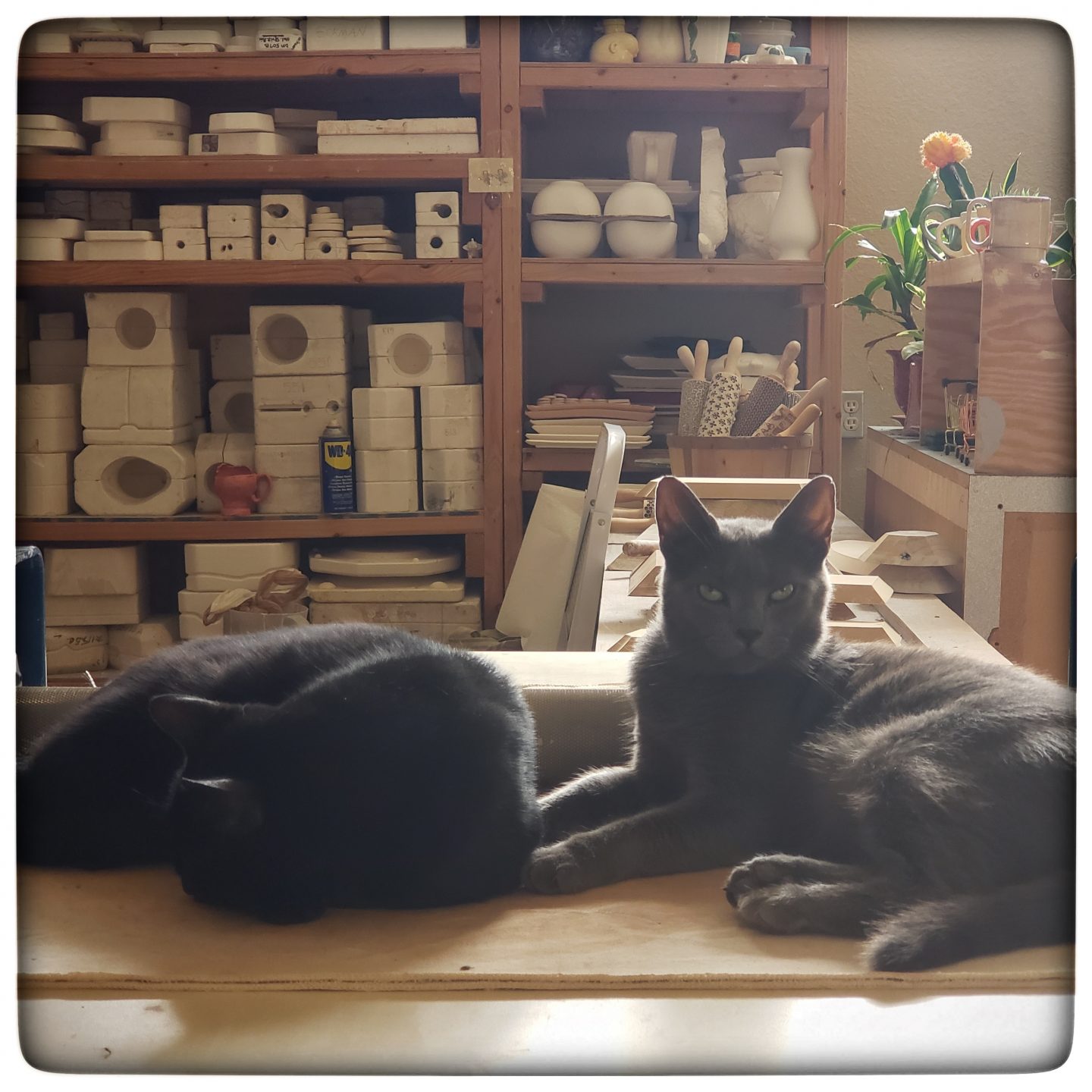 Just a quick post today – I’m firing the kiln and then as soon as it’s done, I’m heading out of town for a day (maybe two, depending on how tired I am by the time I’d need to decide between driving back tomorrow and going to sleep, haha). There is a lot going on in the studio, though, even though I forgot to whip up a graphic for it. Uhm, have a random photo as a spacer? (tries to distract you with jazzhands)

Photo is of Troublesome and Wilder; I mentioned this in the HaldeCult (the HaldeCraft community page on Facebook) but don’t think I’ve really talked about it much outside of that… we lost Wilder about a week and a half ago. We are not entirely sure what happened, he may have been bitten by something or attacked by a bird, while sleeping at the top of a tree that he liked to nap in, and, well, he was unable to get his feet underneath himself during the fall. It looks like it was quick and painless (for him – the pain and guilt for me is quite heavy, my friends) and Shop Elf and I buried him next to Brindle and Tavi, our two oldest House Girls, sisters, who died within a month of each other year before last. We planted a crepe myrtle there, and I’ll share pictures next summer when it flowers.

OK. Heavy stuff over, moving on!

In ceramics, I was hoping to have some new WTF mugs on Friday, but my going out of town is throwing a pause button on that – so expect some on Monday. How’s yellow? Does yellow work for you? I’ll also have some restocks of the MFM mugs, so expect lots of great pictures next week of restocked goodies.

In soap, I’m making soap, finally! I’m starting off with the new tester fragrances, and I should have those in about a week. Then I’ll start restocking regular fragrances that are sold out… and as feedback of the new fragrances come in, I’ll decide which ones are popular enough to bring in and start making those as well.

In yarn, nothing too exciting is happening this week. Last week saw the release of new limited colorway “Your Wild Girl”, and I have the next new colorway in the pipeline — expect “Broken Hearts and Dirty Windows” in September.

In HaldeCrate, last week saw the release of this season’s collection of Cherry Bomb; the yarn mentioned above and a set of nesting dishes. Now I’m on to planning the next one, which will be in November, and will be a revisit of Snow Flurries.

In Patreon, a bonus chapter went up a couple of weeks ago, and another chapter will be coming the first Sunday of September. The chapter is really giving me fits, though! I’m hoping that traveling over the next couple of days, driving and listening to music, clears out that blockage, though.
In knitting, depending on how much TV is in my future in the next 48 hours, I might get very close to finishing that entrelac scarf!

That’s about it for me, right now. I’m mildly frustrated with ceramics, because of all those kiln and glaze issues I’ve been having, but – knock on wood – it’s all fixed now. I’m still not back to trusting every firing, though, and I have put things through multiple firings lately just to make sure they’re quality products… which isn’t time consuming at all, hahaha * cries *. I appreciate everyone’s patience so much while all this is getting hammered out. And after I get back I should be able to focus on getting caught up with custom orders. If you have an outstanding custom order with me, hopefully we’ve talked about it in the last week or two. If not, drop me a line – I’ll have access to email while I’m gone, and I’ll be back Friday at the latest.

Now tell me about yourself! What are you working on? What’s going on with you this week? What’s on your plate, your to-do list, what’s making you feel accomplished for having conquered it?