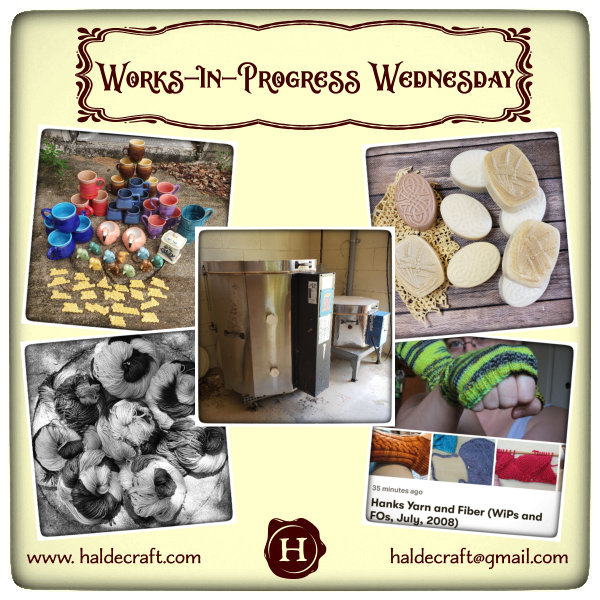 Let’s see… I think we’re into the 437th week of 2020, which means late July, so… I mean, really, doesn’t it feel like that? I saw a meme a couple of weeks ago that it’s not dog years that equal seven for every one, it’s 2020. This year is bananas, and from what I’m watching my friends go through, it doesn’t show any signs of letting up any time soon. But! There’s HaldeCraft stuff to talk about too!

In ceramics… hopefully you saw my post earlier this week about how Big Geek is down again; I’m firing in Little Geek all week long and while I’m not 107% thrilled with the outcome, I should have some WTF mugs soon. And I think I say “not thrilled” because I’d much rather be turning these out a couple dozen at a time, not … three at a time… over the space of a couple of days per set of three… but ceramics has been teaching me patience since I was four years old, so… * shrugs * Anyway, I appreciate your patience with how long it takes and all the myriad things that can go wrong. The thermocouple I ordered that wasn’t supposed to be here until around August 5th showed up in the mail yesterday, and the relays are on the way. And sales have still been really good, thank y’all so much (!!!) so I should be able to order new heating elements for the kiln by the end of next week.

In soap… I do have a list of things to make, I just need the time and counter space to do it. I was dyeing yarn, but am done now… and immediately set that space up to be able to work on the 64 WTF mugs I was going to crank out… and then the big kiln died and I don’t have anywhere else to pile that stuff just yet, so I’m afraid my soap making is ALSO being held up by the kiln being down for the count! Meanwhile, though, I am keeping track of what’s selling so that I need to know what to remake. Here’s my question for you — one soap that I discontinued recently, Wild Mint & Ivy, didn’t sell well (hence discontinuing it) but I did get a request for another mint soap to take the place of that one. Tell me of your mint likes and dislikes! Straight-up mint? Mint blended with something? Do you have strong feelings about spearmint vs peppermint? Do tell!

In yarn… I finally got a bunch of restocks and new things wound, so next week there will be a good update. Five or six colors, with out-of-stock bases replaced, and Jemisin and Nagata showing up in some colors that I haven’t had them in yet. Yay!

In HaldeCrate… the next Crate, a revisit to Cherry Bomb, is going to be smaller than I intended due to scheduling conflicts and kiln issues. There will be a set of two nesting dishes, and then there will also be a limited edition yarn, but that will be it for this one. I am, however, already looking ahead to another Snow Flurries Crate in November! Same color and texture for the ceramics as last year, but different ones, and a different limited yarn.

In Patreon… a new chapter is coming on Sunday. And I just realized this month we hit a new level, which means some new benefits — some monogrammed mugs, with designs inspired by some companies in the book. I’ve been thinking about some of these in the back of my head since starting, and I’m excited to finally have an excuse to make them real.
In knitting… still going on that entrelac cowl in Too Much Quarantini, and I have a pair of socks in Scruffy-Looking Nerf-Herder that I’m also picking up every now and then.

That’s about it for me, y’all. Overall, I kind of feel like I’m treading water right now. Or one step forward, two steps back? This kiln issue has really thrown me for a loop and also gotten me off-track. I had been focusing on the WTF mugs, which meant some other things were getting pushed to the side, but now I can’t finish the mugs at the pace I had planned, but it’s awkward to pick up the other stuff because I’ll just be dropping it as soon as the kiln is repaired. I feel like I’m spinning around in giant circle, flailing about, wondering just why I have these arms, anyway! Tomorrow I’m going to take a good hard look at everything in the studio that needs to be ushered along into some semblance of almost completion, write everything down, and then list everything in order of how long I think it will take to finish that thing … then I’ll start doing the quickest things first. Cross your fingers that this works, haha! Ha?

Anyway. Enough about me, now. How are you? I see many of you struggling with school – a good number of my friends are teachers in all levels of education from grade school through university, not to mention all my friends who are parents. My heart goes out to all of you right now. It seems like there are no easy answers and there are a million things that could go wrong, and everyone is being asked to make a choice but to also not be too married to that plan in case things have to be done completely differently. I can only imagine the stress.

So. What are you up to this week? What are you working on? Struggling with? Feeling accomplished about? Do tell!