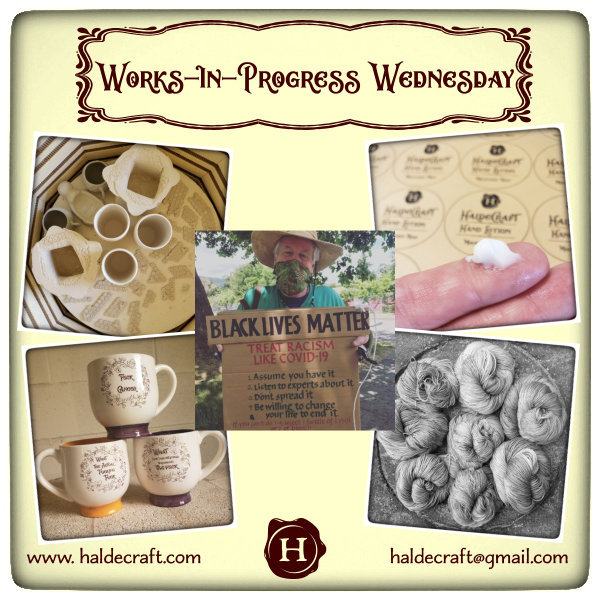 July. Whoa. Who said that could happen? This year has felt like an Irwin Allen disaster film played at 3x speed. (Those meth gators better back off!) ANYWAY. Here’s what I’m up to this week.

In ceramics, y’all, I am fiiiighting it out with these WTF mugs. I’m doing some behind-the-scenes testing of stuff, that I’ll get into next week if it works. Cross your fingers. That’s about all that’s going on in the studio this week, because I’m having some AC problems over there and can’t work past about noon until it’s too hot in there to think.

In soap, I went ahead and ordered some new soap base. I’d been trying to hold off until they got lotion supplies I wanted as well, but it keeps getting pushed back, and I want to restock soap soon. So expect a soap update in a couple of weeks! (Looking for a bulk order of your favorite fragrance in the goat’s milk base? Now’d be a good time to hit me up for a custom order.)
In yarn, I’m making a list of restocks to dye next week, and I have a new colorway coming up in a couple of weeks!

In HaldeCrate, there’s not much going on (mostly because it’s too hot to work in the studio). I had tentatively planned a new Cherry Bomb set of ceramics (and new yarn colorway) for August… but… meh. I’m not really feeling it right now. Hopefully that’s just the brain-melting temperatures speaking, though.

In Patreon, I’m getting some good writing done this week since I’m holed up in the air conditioning at the house. Good thing, too, because this Sunday will see another chapter!

In other things, the big news is that I’ve started a Facebook group for HaldeCraft (https://www.facebook.com/groups/3034545099994095/). I’ve thought about starting one for a while, but held off… but now with the redesign at Ravelry causing so much upset, I decided to have a “second home” for my Ravellers – this new group has already, in one day, seen more conversation than my Rav forum has in weeks (months?) and it’s also giving some people who aren’t yarnies a fun, safe, inclusive, supportive space. I love the energy there already, and “love” and “Facebook” are not two words I put together lightly!

That’s about it for me, I think. What about y’all? What are you working on this week? Or not working on? What are you reading, eating, drinking, watching? Tell me about your week!