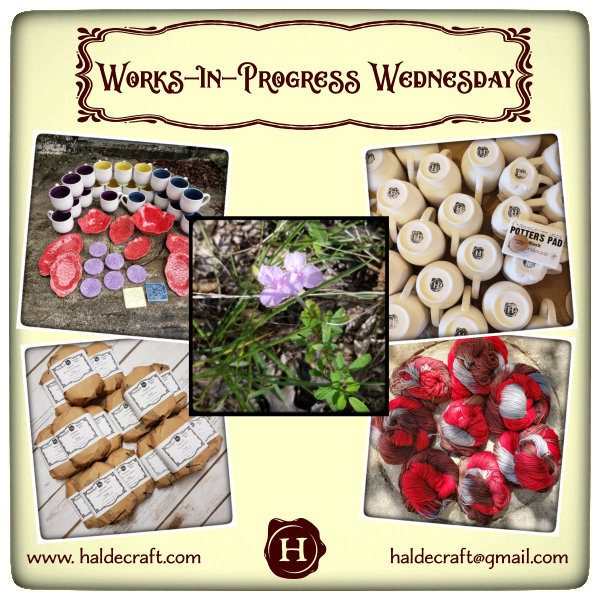 It came to my attention last week that I hadn’t done a weekly, works in progress post for about five weeks. FIVE WEEKS. It’s not that I’ve not been working – you follow me on social media, you can see I have. But I’ll do things like… get orders out first thing, stare at the wall for three hours, do two hours worth of work, and then switch to writing. It’s those three hours of staring at the wall that kill me, haha! But I try to tell myself the same thing that I would tell you, if you came to me and told me that you were having trouble concentrating, having trouble focusing. And that thing is that … hey. The world is on fire around us. We’re all focused on a thousand things in a thousand places, going a thousand miles an hour. Having trouble with concentration and focus isn’t weird in a time like that — what would be weird would be carrying on as if everything was the same it was six, eight months ago. I’m willing to bet that you’re probably feeling some level of the same. Is there a way to help each other out? I tell you what I’m working on, you tell me what you’re working on, we both agree that we’re doing a lot (maybe too much) and maybe that taking a nap or having a donut and a stare off into space is completely fine.

In ceramics, the big kiln is back up and running, and I’m trying to go on at a pretty good clip. I got the Under the Sea crate done pretty quickly once the kiln was back working again, and I’ve been working on restocking things (like the WTF mugs, which I will hopefully have more of tomorrow). I’m working on figuring out what I want to do for the next one (that hopefully won’t be a month late due to kiln issues) and also playing around with some new ideas.

In soap, I’m about caught up on making soap, which is good because I just ran out of goat’s milk this last big making session. I will order some, but I’m waiting for the place I get it to get a couple other things in so I can get some lotion supplies at the same time. They’re projecting mid-June, so I should have everything ordered by the end of next week (knock on wood). I tell you what, though…. I picked the wrong year to run out of a few soap fragrances. Some of them I did that on purpose, because I track when I make them and if I hadn’t made them in X-long, I phase them out. I was scheduled to phase out about six fragrances, and then wound up having to end another couple because it turns out that since the last time I bought the fragrance, it was discontinued. Some of them I’ve already taken offline, but some, I still have another few of them and I’ll leave them up for sale – just when I sell out, that’ll be it for those.

In yarn, this Friday I’ll release a limited edition colorway, and I’ll also start dyeing the next colorway. And – embarrassingly enough – I still have some restocks to wind!

In HaldeCrate, the Under the Sea Crate went up last Friday. I love, love, love this texture and am so sad that I had to keep putting off getting it listed… first because I just wasn’t ready and then because I was having kiln issues. I do still have to write a blog post about it – maybe that will make it feel more “introduced”. The next Crate will be a revisit of the Cherry Bomb texture (and a related yarn colorway that will be in the same vein but different from the first Cherry Bomb colorway).

In Patreon, I’ve been having such problems focusing and concentrating that I’ve had to switch around story weeks lately. That stresses me out, but I have been happier with the last three chapters than I have with almost any of them. So I guess the timing is right, it’s just that … somehow I got off-calendar by a few days. Hopefully that’ll be straightened out after this coming chapter (unless the world sets itself even MORE on fire and all of what focus we all have packs up and moves to the ISS).

In knitting, there’s almost nothing going on. I started an entrelac scarf with the colorway I’m releasing on Friday, but I haven’t gotten but about half of the first (of two) skeins knitted up. I have a couple of things that were finished but for weaving the ends in, and I’ve done that now, but… have I remembered to take photos of those things? Sigh.

In closing… I’m busy, but I have things I’m dropping the ball on and things I’m getting finished but later than I intended. I’m sure you can relate. How are you? What’s on your plate? Are you back at work? Still at work? Have you found work? Do you have too much work? How’s your heart and soul? Are you speaking the truth, even if your voice shakes?