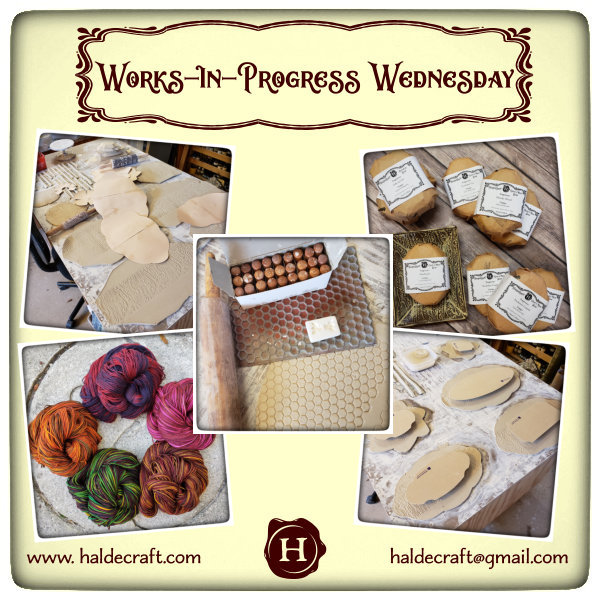 In ceramics, I have two main things going on this week – playing with shapes and textures, and making a new set of magnets involving the word “be”… be strong, be unique, be whatever, and so on. I thought I was going to make a series of mugs that said those, but the more “be” words I come up with the more I think that would be a hundred thousand mugs so how about maybe some magnets, instead?!

In soap, I had a small random update this week, as I’m between “what I’ve made” and “what I’ve wrapped” – as soon as I get more wrapped, I’ll have another small update next week. And I think I have enough soap made that as I get it wrapped I should have enough for a small update every week for at least the next three weeks. I had to stop making soap, though, because I also had some yarn I needed to start dyeing, and it’s the same work surface. I can either dye yarn or make soap, but not both. Sorry, soap! At least you got a good update!

In yarn, I’m dyeing yarn this week (as I mentioned above). I’m dyeing the new April colorway, which will also be the March yarn for my yarnies on Patreon (Cosmic Makers and Solar Systems get a skein of yarn every month, and for the rest of the year it’ll be an advance of the next HaldeCraft colorway. Sign up before the first of the month, get charged on the first of every month, and get yarn shipped to you between the 15th-20th. Easy peasy lemon squeezy!). And I have a list of restocks to make as soon as I’m done with that, including Blue Jean, Ranger Baby, Sock Monkey, and others.

In Limited Edition HaldeCrates, I’m working on the ceramics for the next one, Under the Sea. I think I’ve decided on the ceramics, but I want to do a couple more tester trays to make sure I want to do three nesting trays vs one larger tray. As soon as I’m done with that, I’ll start mass producing! Well, as “mass” as I get, being one person. Oh — and there’s been a little change in the Crates; I’m no longer taking pre-orders unless you want more than two skeins of yarn – you can drop me a line, if you do. So everything that I’m making for this crate will all go up for sale at the same time, and once it’s sold out, it’s sold out.

In Patreon, I am not getting the time I want to write this week – life keeps taking over. I may need to take a few days off from HaldeCraft next week to devote some time to full-on writing… we’ll see how the rest of the week goes. I have two chapters to post, one right after the other, in a few weeks, and I want to do them both justice.

In knitting, I have half of a sock and most of a toe done on one pair of socks, but I’ve stalled out on pretty much everything else. I little piles of yarn with needles sticking out of them sitting my by chair in the evening, staring at me, wishing I’d do something with them. I’ll explain why I don’t have a lot of knitting time in the very next paragraph…!

In other things… I’ve started scanning slides. Did I mention that one thing I wanted to do this year was finally get all of the boxes of family photos scanned and organized? Except that my “good” scanner (about 15 years old) finally died the True Death. So instead I bought a little scanner that does slides, negatives, and super-8. I know this will leave me high and dry with the photos at the end, but I’ve actually already scanned a lot of the photos… the hangup were the things that weren’t photos. I debated trying to look at all the slides first and organize, but it turns out with my awesome little scanner it’s easier to just scan the slide and figure it out after. So I scan a bunch, then rotate, flip, and put into folders by type. I’ve been doing this in the evening as we’re watching TV after dinner, and I have to say… it’s really addictive. I’ve put some up on my personal Facebook page, including a whole bunch from the 1964 World’s Fair in New York. Such treasures!