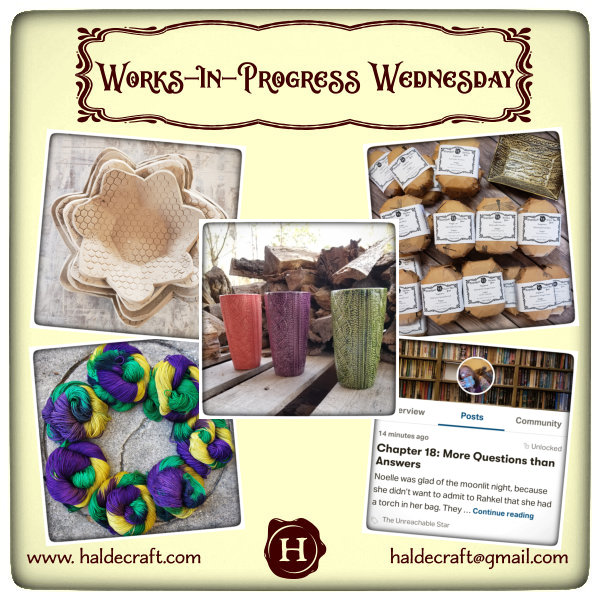 Wednesday! It’s the new Monday! I think it’s hilarious that over the years we had the yarn store open, the only day of the week Hanks was closed was Tuesday, and that lead to many a “who’s closed on a TUESDAY” question from people who would show up mid-week needing help with their yarn emergencies. (Spoiler: People who want to be open on the weekend to be able to cater to the largest number of people who are off on the weekend, and yet still need a day off a week. Those people are closed on Tuesdays.) Then over the last few weeks the day that I’ve wound up needing to take off from work is… Tuesday. At first it was throwing me off – I mean, I don’t like taking days off at all – but this week, as I was scrambling on Monday to finish things and a little upset I wouldn’t be able to to go a little slower and finish those things Tuesday, I was like… NEWS FLASH, SELF. Maybe instead of making Sunday your office day, and throwing yourself into studio work on Monday, you need to make Monday your office day, take Tuesday off, and then throw yourself into the studio Wednesday. That does mean I need to write this post first thing in the morning on Wednesday, though, before I even get over into the studio, or it’ll never get written! So awayyyyyyyyyyy we go!

In ceramics, I’m getting ready to fire the kiln with a bunch of skull and sheep ceramics, so expect a restock on those soon. I’m also working on some new honeycomb designs – I’ve been showing those off and the response has been pretty great! And just wait until you see what glaze color I’m working up for them. I’m torn between two – a matte and a gloss – so I’ll show them off as soon as they’re ready and let y’all tell me which one you like better. Speaking of glaze colors, I’m having a sale on the cabled ceramics right now, as I do them in three colors and want to get that not only down to one color, but a new color. So I’m playing with some glaze ideas for that as well (pink and cream have been the two suggestions so far, and I like the cream idea… so stay tuned!).

In soap, I had a small update Monday, I’ll have another small update next Monday, and another one the Monday after that — and the soap base that I ordered came in, so I have another 100 lbs of soap I can make as soon as I’m done dyeing yarn.

In yarn, like I said above, I’m dyeing yarn this week. The last of the pre-ordered Mardi Gras colors, and the Patreon yarn, which will also be the … oh, whoops. I just realized that on Monday I dyed up the May yarn, and next month is not May. Next month is March. So then. Hahahaha. Today I’ll start dyeing up the MARCH yarn, which is also the February “we special so we get it early” Patreon yarn. And I’m ahead for May! Yay? Hahahaha. Imma dork. How on EARTH did that not even occur to me all day on Monday? Sigh. Brains are dumb.

In HaldeCrate, I’m getting orders together – some are actually complete (how did I do THAT a week early) so if you pre-ordered, I might actually get yours out by the end of this week instead of on the 21st (depending on how long the yarn takes to dry, and it looks like rain today which means massive humidity, so … take that into account).

In Patreon, this coming Sunday is a Sandhill Ecosystem post. There are only a few Hanks posts this month but they’re fun ones. And I’m working on the next chapter/installment, which will go up the first Sunday in March. And like I said above, Patreon yarn is being dyed today, and so will go out as soon as it’s dry!

In knitting, I got a few minutes the other day to work on the thumb gusset of one of my Tatterhood arm warmers, but that’s all I’ve had time for. I’m almost done with this evening inventory/accounting catch-up work though, and knitting will resume after that!

In other things…. Well, that’s about it. There was a big storm out here and we had a couple of trees come down…. That Poor Man has already been at them with his chain saw. Oh! I’ve been in discussions with our local coffee shop to make them some custom ceramics, that’s a new thing that’s happening. I’ll keep y’all posted – the coffee shop is the only place you’ll be able to get Let’s see… anything else….?

I think that’s pretty much it for HaldeCraft and myself this week. What about you? What are you working on? How’s your knitting and crocheting going? Any big projects? Any small projects? Maybe you even just got some yarn wound up – hey, that’s a start! Tell me what you’re working on this week!