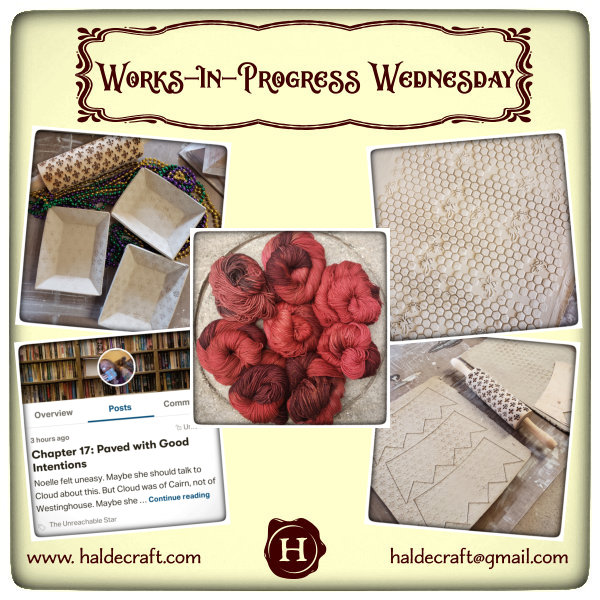 I sat down to write this blog post first thing in the morning, but noticed that last night I’d closed up shop without finishing the sort of comparison sheet I was drawing up for different mapping programs (I need some maps and would like some ship floor plans for my Patreon project but am having trouble narrowing down the right things). So I decided to finish doing that first, and…. Wow, what a rabbit-hole. So here I am, now, seven hours later, finally getting around to this post!

In ceramics, I’m working on the Mardi Gras crate ceramics, testing out the new honeycomb texture, and finishing up the replacement Snow Flurries pieces. I needed two trays, so, uh, I made five. Because I’ve had bad luck. So maybe I’ll have a couple extra when all this is done? And I do have three mugs in that style, but I’d done the handles wrong – I may go ahead and glaze those and put them up for sale as well.
In soap, I’m making soap in the background this week, and I’ll try to carve out time next week to wrap it, so look for an updated stock last week of January or first week of February!

In yarn, there’s a new color coming out this Friday (Tatterhood), and I’ll be showing off the Mardi Gras colorway Monday (I’ll be leaving pre-orders for the Mardi Gras Crate open until the 24th, instead of the 17th, so people can see things in color first).

In HaldeCrate… uh, this entire post has kind of been about HaldeCrate, haha. I’m making the soap sets this week, I have the yarn ready to show off, and I’m working on the ceramics. I’ve also already ordered the rolling pin I want to use for the next HaldeCrate in May – hopefully it’ll be here soon so I can get started on ceramics and actually have some samples done before the pre-order cutoff date next time. Sigh.

In Patreon, I’ve caught up on chapters… I’m fixing some timeline issues thanks to some software I just got… I’m obsessing over mapping software… I’m getting ready to paint the January ceramics, and the January yarn went out today. Oh, and postcards went out last week, they should start showing up any moment now!

In knitting, I finished my hat for my friend Bill, and that’s kind of all I have in knitting at the moment. I have a pair of socks and a pair of gloves on the needles but no time to work on them.

In other things, I didn’t finish sales tax last week like I should have, so I’m finishing that up now. I worked on it last night and want to double-check everything after I’m done with this post, and then it’ll go out tomorrow… four days before the “late if postmarked after this date” date! I’ve cut it more close, but… I’d rather get it out more towards the 10th. Sigh.

And that’s about it for me… I kind of want to take a nap after writing all that! How about y’all? What are you up to this week? What’s on your list of things to do that you’re conquering? Or being conquered by?