More on shipping -- after I fill the voids of the

These skull luminaries are (obviously) not going t 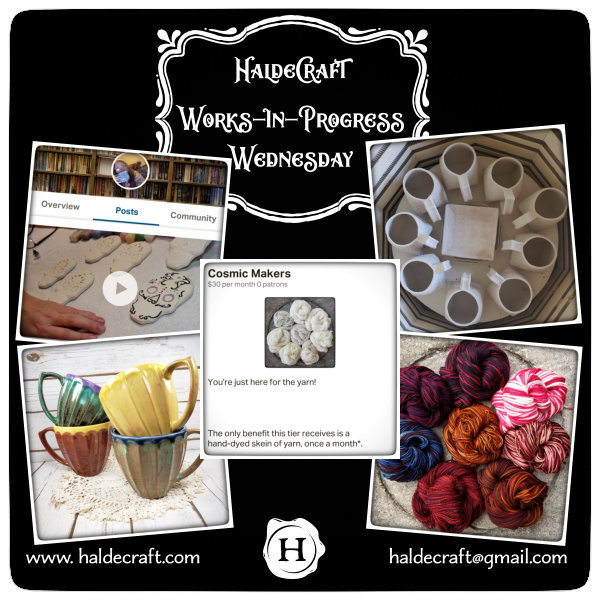 It’s the week after HaldeCrate and the week before Thanksgiving, and so I’m recovering from the one, planning for the other, and of course trying to get things ready for GLAM on December 8th.

In ceramics, I’m slabrolling a bunch of chocolate clay dishes this week, to have them ready for GLAM, and in between stages on that I’m painting, painting, painting! In soap, there is… nothing going on this week. I’ve finished the large custom order I had, and was thinking that I’d like to make an entire new batch of soap just for GLAM, but I don’t think I’m going to have time – instead, I’ll have to make my GLAM stock up from what I already have on the shelves.

In yarn, I just did my planning for next year, and between some things I didn’t get to this year, HaldeCrate, and some things I already wanted to do next year… I realized I have eleven new colorways coming out next year! Some are new, some are club colorways voted on to come in as regulars, and some are going to be limited edition HaldeCrate colors.

In HaldeCrate, well, we’re in that two-week(ish) space between sending out the last Crate and getting ready to announce the next crate. Things I learned in this last crate? I need more than two weeks between the end of pre-orders and the time when I have to mail everything out. Also, if things can go wrong, they will.

In Patreon, I’ve started up a new Patron level for the yarn lovers – this is the first thing I’ve done there that ties more into HaldeCraft than it does into The Unreachable Star. This is just for the yarnies – for $30/month, including shipping, Patrons who sign up for this level will get a skein of yarn a month. While I have a level for yarnies who are into the story (they get yarn, access to the story, a monthly chat on Discord, and a physical postcard that I mail once a month), this is a level for people who just want yarn. Patreon is designed for recurring payments, and my online shop is not; this way I can offer a type of monthly yarn club without having to remind people to pay for it every so often. It’s very “set it and forget it” and believe me I know how appealing that is! I’ve been a member of a fiber club for going on twelve years now, that’s set up for automatic payment. It’s just so nice not to have to think about it and make choices.

In knitting, not a single thing is happening. I got about an inch knit on a stockinette sock the other day but that’s about it.

In other things, I’m thinking about and looking into starting to get a booth at the Melrose Farmer’s Market. It’s on Friday afternoons, and Melrose is only about a 15 minute drive away. They have some crafters, but no potters that I’ve seen, so I think I might be a good fit for them. There’s also a Saturday morning one here in Keystone (that I’ve actually been to more than I’ve been to the Melrose one) but the Melrose one is right on the main road through town on Friday right after work and I always see people stopping there when I’ve driven past it.

And that’s about it for me, and what’s on my mind and on my work tables this week. What about you? What are you doing? A friend of mine made an entire quilt over the space of five days, and posted on Facebook about the entire thing. That was fascinating! I love hearing about what other people are doing. So tell me! What’s filling your days this week?