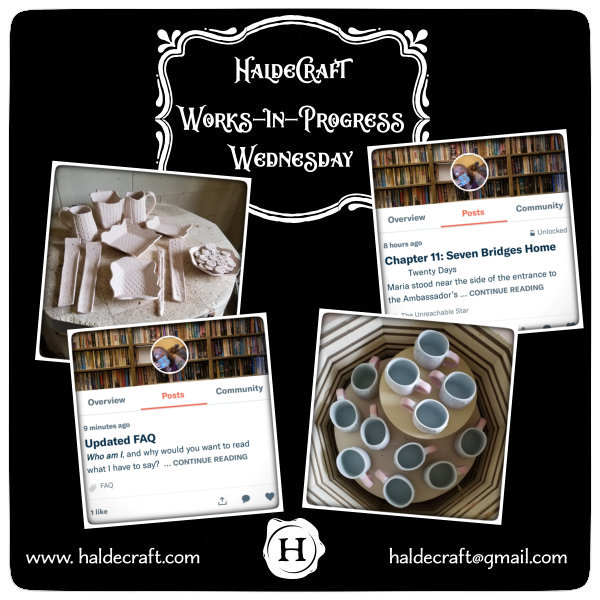 It’s Wednesday again already? How does that happen? CALENDARS. More confusing than magnets. How do they work?! ANYWAY. Here’s a little about what I’m up to this week…

Most of my energy is going to ceramics this week; I’m obsessed with handbuilding again, making some fun things to bring to the Florida Fiber-In. And I’m getting ready to release a whole bunch of new things next week… honeycomb and skull ceramics!

In soap, not much is going on right now. I did just place a large base order; goat’s milk and oatmeal, and also a third base that I’m going to make specifically for the Florida Fiber-In — it’s a triple butter base (Shea Butter, Mango Butter, and Cocoa Butter). If any make it through Fiber-In, I’ll list them on the site under the Miscellaneous Soap listing as I’m not planning on bringing that in as a regular base.

In yarn, I have sooooooo many skeins of yarn that need to be rewound! Overdyes. One-Hit Wonders. Pre-orders from the Cats & Dogs HaldeCrate. A colorway I decided not to bring in just yet because it’s giving me troubles, and a colorway I decided to bring in instead. Anyone want to come out to my studio and wind some yarn for me? I’m dyeing it faster than I can reskein it.

In knitting, I have finished my socks in the Cats & Dogs colorway, and I’ve restarted a pair of socks in the Nagata base yarn, in the Buttercream colorway. I keep forgetting what complicated cable pattern I’m doing, and unfortunately while I know which book it’s in and approximately what page it is, there are three patterns that look really similar and I have made enough mistakes with them that I can’t tell which the original cable pattern was. Sigh. So I’ve ripped them out for like the third time and I’m just doing Child’s Sock in Shell. Easy Peasy.

In HaldeCrate, today is the last day of pre-orders for the current crate, and I’m working on my plan for the next Crate. That one will be in November, so I’m thinking some sort of … Pie/Thanksgiving/Holiday/Snow theme. Starting with this next HaldeCrate, too, I’m going to start making sort of a more standard crate — always yarn, always a mug, always a soap dish, always a soap set. That way people who always want the same thing will be more able to plan and budget in advance, it’ll be easier for me from a planning/template view, and if I ever want to add different ceramics (like a yarn bowl, or a serving dish, or something) it’ll be like a bonus for everyone. Part of this, also, is coming from some issues I’ve been having with the Mug of the Month. I’m going to fold that into the HaldeCrate in 2020, and the mugs that I would do for the Mug of the Month will be in the HaldeCrate instead (and four a year, instead of twelve).

In Patreon, I’m getting ready to put up Chapter 12 this coming Sunday! And I’ve switched up some of my Patron-only posts over there, exchanging the Advice column for what I’m calling “Silent Sneak-Peek Sunday”. That’s a post that will have a 3-5 minute silent video of me crafting, and a handful of photos of some things coming up for HaldeCraft that I won’t actually be posting anywhere for another week or two. I may actually switch out the Recommendation post for a second “Silent Sneak-Peek Sunday” post, if it’s well-received.

I think that’s about it for me this week. For those that know about our Internet troubles out here (we have HughesNet Satellite Internet that comes with a data cap, and it goes out in heavy cloud-cover when it rains, which is daily), I’ve been using my phone as a mobile hotspot for the Fire TV stick I got on Amazon Prime day. Although Verizon doesn’t give me the best signal, we have been able to catch up on some streaming series that y’all have told me about. We’re caught up on Stranger Things, Hanna, Good Omens, almost all the Marvel movies, and now we’re watching the Jack Ryan series. Anything else out there on Prime/Netflix/Hulu we should watch?

And what’s going on with y’all? What are you listening to/watching/consuming/doing/making? How’s your week? How’s the weather? Is summer almost over for you? When does school start? What’s new in your life?